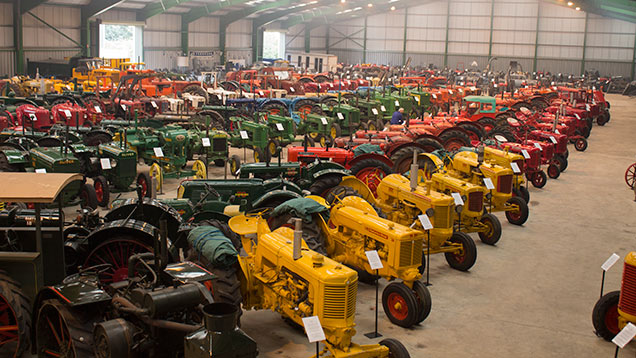 Paul Rackham caught the vintage-tractor-collecting bug in the early 1990s.

After buying a rundown International Farmall BM and restoring it to its former glory, he set himself the challenge of amassing one of the finest tractor collections in the world.

Twenty-five years later, he’s managed to pack a 50,000sq ft grain store with more than 200 rare and historic machines, some of which are the only surviving models of their kind.

Tractors in the collection range from one-offs such as the Holt 75 and British Wallis to better-known models including the Massey Ferguson 135, the Field Marshall and the American-built Minneapolis Moline.

But now that the mission has been completed, Mr Rackham has decided it is time for a new project.

“My aim was to fill the shed and, now that I’ve done it, it’s time to take on another challenge,” he says.

“I’m also not getting the kick out of it that I used to.”

The tractors in the collection are a mix of well-maintained originals and fully restored models, says Mr Rackham.

“Those that were in reasonable condition we tried to keep as genuine as possible, but a lot were too far gone for that.”

They have also been busy servicing, starting and prepping the models for sale, which is being jointly operated by Cambridgeshire-based auctioneers Cheffins and Suffolk-based Clarke & Simpson.

“This is a once-in-a-lifetime sale,” says Cheffins auctioneer Oliver Godfrey. “It is not just the monetary value, it is the historical value.

”What Mr Rackham has done is preserve these machines for future generations.”

“The nice thing about the collection is you can see a progression through the ages, from the linkages, pneumatic tyres, the move from petrol to diesel,” he says. “It gives you a snapshot of the history of agriculture.”

The sale is being held on 26 September at Mr Rackham’s Camp Farm, Roudham, Norfolk. More details, including a PDF of the full catalogue, can be found on Cheffins‘ and Clarke & Simpson’s websites.

Paul Rackham also owns the Hunday collection of Ferguson tractors, which is being sold separately.

This includes tractors from Harry Ferguson’s early collaborations with David Brown and Henry Ford, right through to his own T20 models and later Massey Ferguson tractors.

There are also several rare implements, including a replica tractor-mounted combine, a side-mounted baler and a “manless” bale-and-sack loading device.

Mr Rackham hopes the collection will remain compete and end up in Northern Ireland where Harry Ferguson was born.

Mr Rackham farms 2,000 acres of owned and tenanted land from his base at Manor Farm, Bridgham, Norfolk.

The farm grows a mix of arable crops, veg and maize for biogas and has a 1,000-head beef-finishing unit.

The lots to look out for…

Built in 1918 by the Holt Manufacturing Company in Peoria Illinois, this Holt 75 is thought to be the only tractor of its kind.

The British Army used it during the First World War for various jobs including hauling heavy Howitzers around the battlefield.

Another rare beast is this 1925 British Wallis. It’s fitted with a Ruston four-cylinder petrol/paraffin engine that develops about 28hp. It was built by Lincoln firm Ruston and Hornsby.

The Weeks-Dungey was the brainchild of Kent farmer, Mr Dungey, who wanted a compact tractor for operating in orchards.

William Weeks and Son began manufacturing the tractor in 1922 from its Perseverance Ironworks in Maidstone, Kent.

The Fordson Model F was introduced in 1917 at the request of the British government to help meet need to increase food production during the First World War.

It is fitted with a four-cylinder petrol engine and was built by Henry Ford in Dearborn, Michigan.

This rare pre-production Marshall MP6 was the third model to come out of Marshall’s Gainsborough factory in 1954. Its Leyland six-cylinder diesel engine develops 70hp and drives a six-speed transmission. Top speed is 13mph.

The Sauderson Universal G was built in 1916 by the Saunderson Tractor and Implement Company, based in Elstow Bedfordshire.

Other models that caught our eye…