The average horsepower of new tractors in the 1920s was just 25hp, but it’s now nearing 160hp. Michael Williams takes a look at the 11 most powerful tractors built over the last 100 years 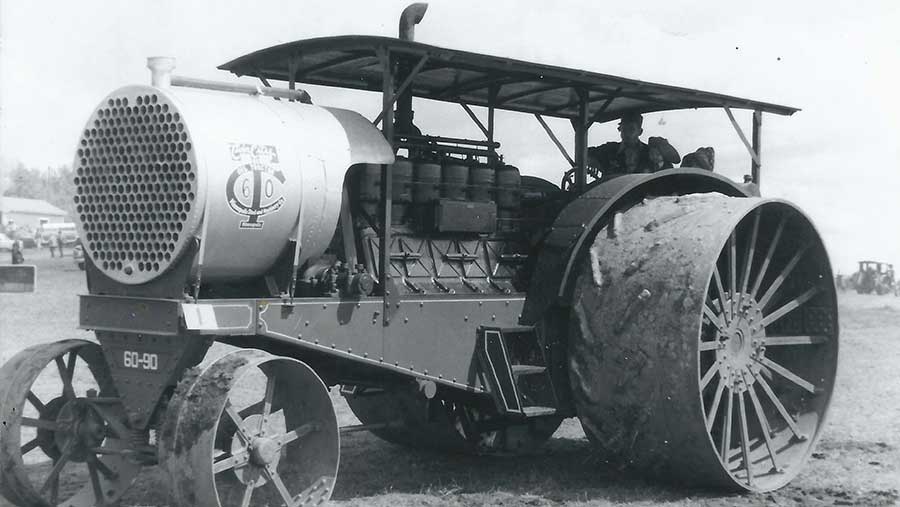 In the early 1900s, American and Canadian farmers were bringing large areas of prairie land into cultivation for the first time.

Big power was the fashion and the Twin City 60-90 model enjoyed a brief spell at the top of the league table.

See also: What tractors did farmers buy in 1949?

It was announced in 1913 by the Minneapolis Steel & Machinery Co and was powered by a six-cylinder engine running on paraffin.

This produced 90hp, with 60hp available at the drawbar. The tractor weighed 12.7t and its top speed on the road was less than 2mph. 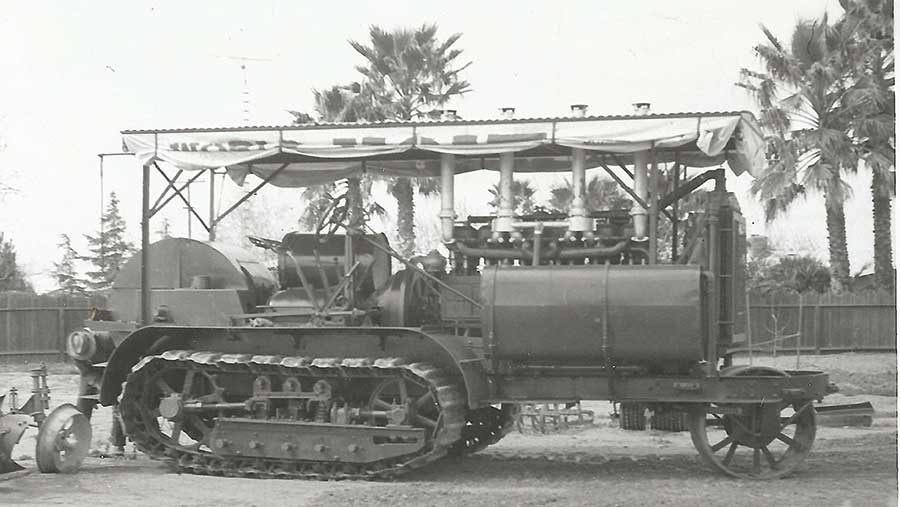 One of the tractors that ended the Twin City’s brief supremacy arrived in 1917 from California-based Holt Manufacturing.

This was the 70-120 model, using the American numbering system to identify maximum horsepower at the drawbar followed by the engine output.

The 120 was powered by a six-cylinder engine that contributed 2.5t to the tractor’s 13t total weight.

Holt was among the first companies to build successful tracklayers.

These scored a huge success during the First World War as army tractors, pulling field guns and other equipment through battlefield mud and large numbers were sold to the British, American, Russian and French armies.

Holt adopted the Caterpillar brand name and this became the company name in 1925 when Holt merged with Best, its biggest rival in the tracklayer market. 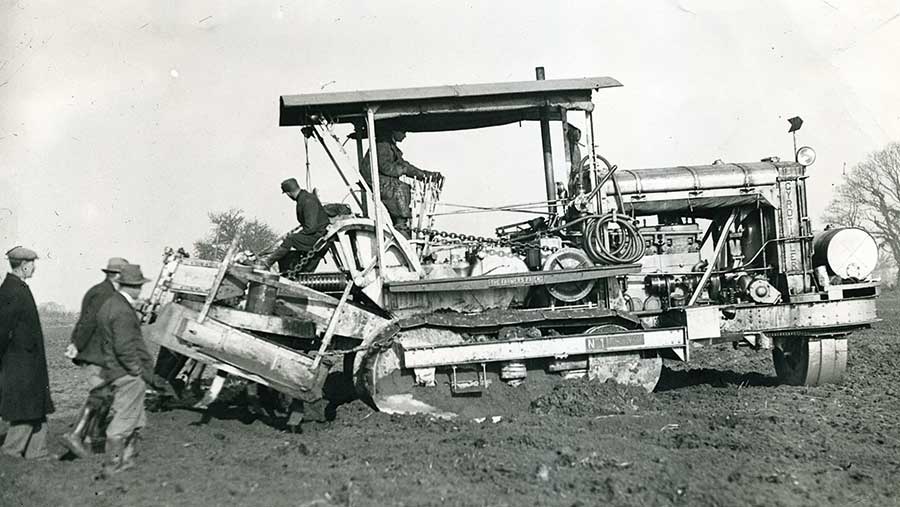 Britain’s first really big tractor arrived in 1927 when the Leeds-based Fowler company announced the first of its Gyrotiller models.

Fowler had been a world leader in agricultural steam power development, but it urgently needed a new product as tractors replaced steam and the Gyrotiller seemed ideal.

Based on a high-horsepower tractor unit driving a rear-mounted rotary cultivator, the first version weighed 22.5t.

The power unit was a 225hp Ricardo petrol engine originally developed for Britain’s First World War tanks, and the fuel consumption at full throttle was an extravagant 63 litres/hour.

Despite its thirst, the Gyrotiller achieved some export success for sugar cane cultivation, and sales increased as more economical diesel models arrived.

Claims that a Gyrotiller could turn untilled ground into a 20in-deep seedbed in one pass attracted some UK contractors, but production ended in about 1937.

One of the problems was a downturn in sugar cane profit margins, poor engine reliability (which resulted in high warranty costs) and using the cultivator tines at full depth was blamed by some customers for damaging the soil structure. 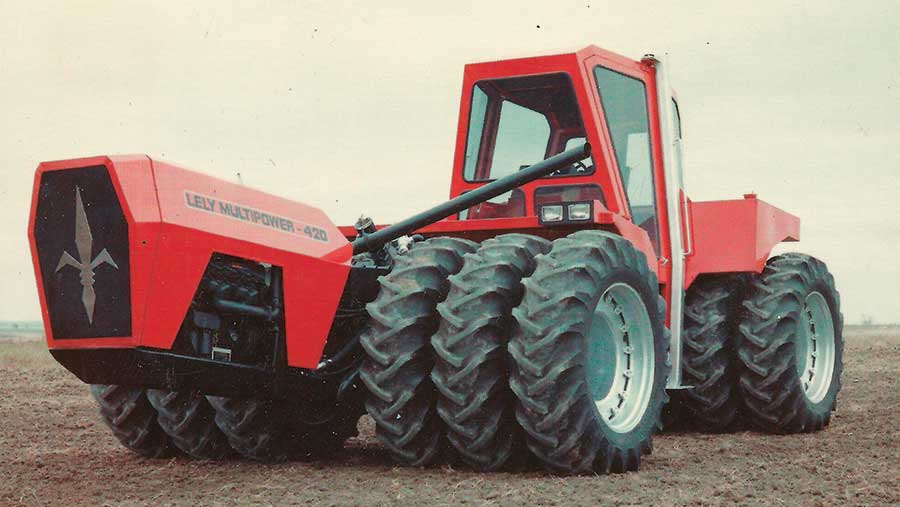 A surprise competitor in the big tractor sector in the 1970s was the Dutch machinery manufacturer, Lely.

Its Multipower 420 tractor was built in 1977 at its factory in Texas and was designed mainly for the North American market.

It used pivot steering and the 420hp output was produced by two 210hp Caterpillar V-8 engines, one driving the front wheels while the rear engine powered the back wheels and the pto.

Each engine had its own 10-speed gearbox and fuel tank, offering the option to use both engines for maximum power or just one engine for lighter work.

The cost and complexity of two engines and transmissions was a disadvantage and few, if any, of the twin-engined tractors were sold. 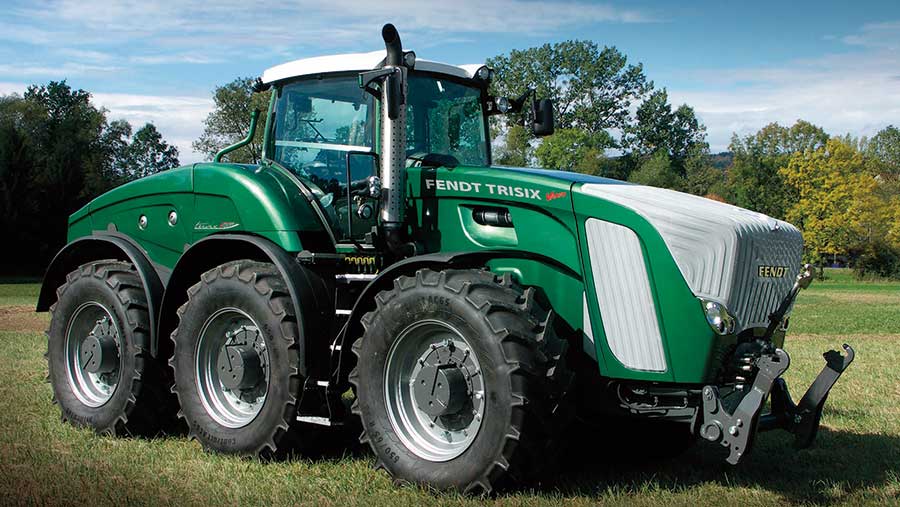 Germany is a more recent arrival in the big tractor category, starting with the six-wheel drive Fendt Trisix prototype arriving in 2007.

Based on the axles and frame from a truck, the Fendt tractor boasted a 540hp engine powering a pair of Vario transmissions with 60kph top speed capability and steering through the front and rear axles.

There is plenty of speculation about possible production plans, but at this stage the Trisix remains an experimental prototype. 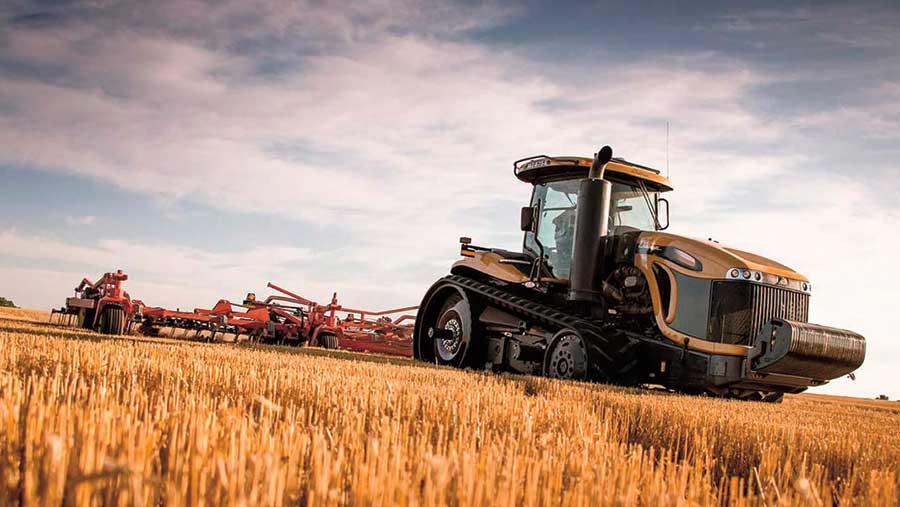 Current top-of-the-range options for those choosing big tractor power include three models with rated outputs of 600hp plus.

A fourth contender, the MT875E model in AGCO’s Challenger tracklayer series, is only slightly below the 600hp level at 598hp and up to 646hp maximum output. 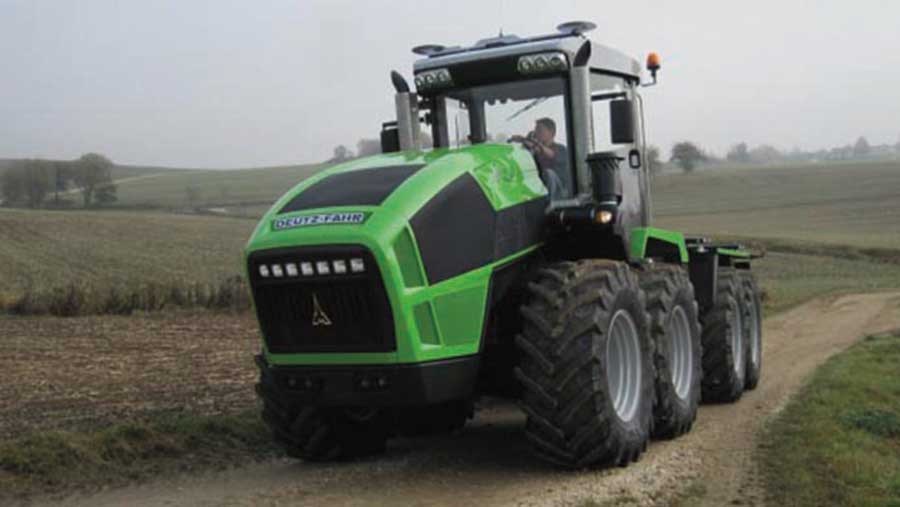 Not to be outdone, Deutz-Fahr announced its Agro XXL 1630 tractor in 2009 with four powered axles, pivot steering, and a 16-litre Deutz V8 power unit with 600hp.

The transmission is an 18F/6R powershift providing a 40kph top speed and including an electrically operated parking brake.

The hydraulic flow is 170 litres/min, but as the tractor is designed mainly for pulling, the specification doesn’t include a three-point linkage for mounted implements.

There are no plans to base a production tractor on the Agro XXL. 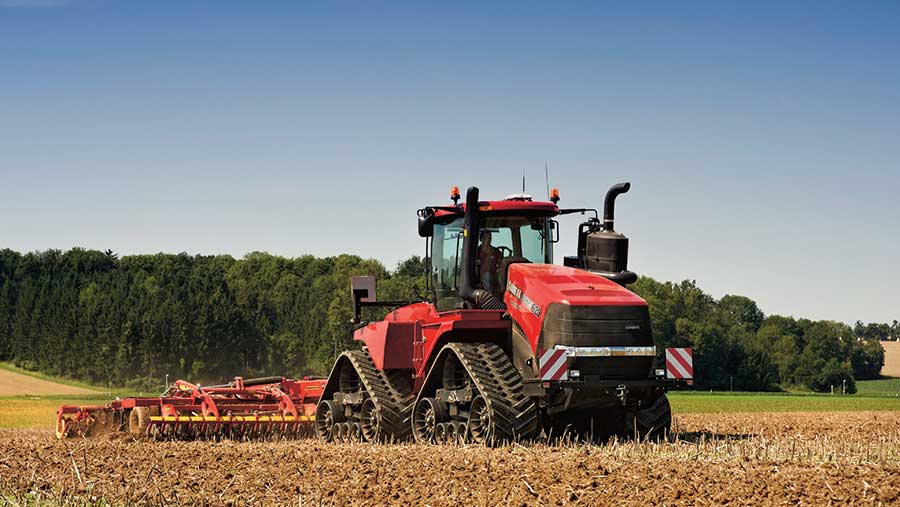 For those needing 600hp plus, the 620 model in the Quadtrac range from Case IH has a four-track layout. The model number indicates the rated power output and the maximum power is 682hp. 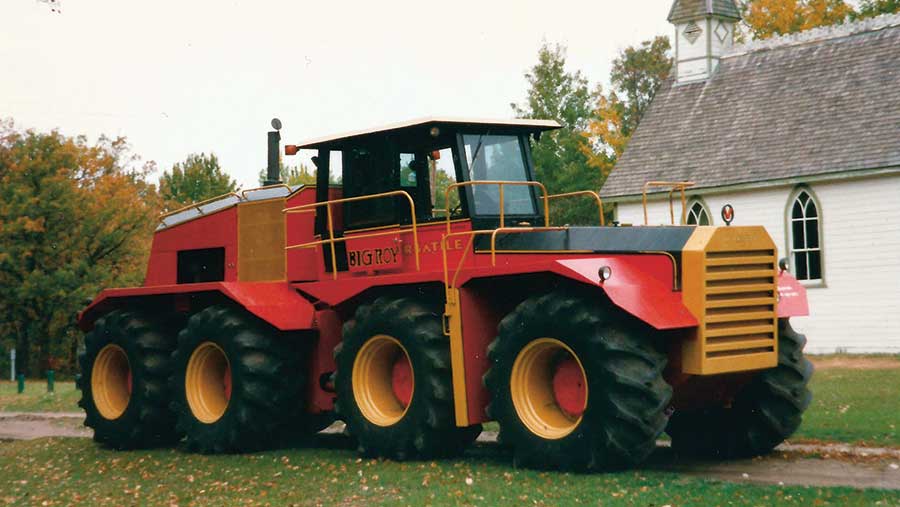 Competition in the high horsepower sector increased in the mid-1970s.

The top Steiger model was well over 300hp and a 500hp model was at an early stage of development at the Big Bud company.

The Versatile company in Canada responded with in 1977, with the Big Roy, named after Roy Robinson, Versatile’s dynamic managing director.

It had distinctive styling, with design features including eight-wheel drive, pivot steering and a rear-mounted 600hp Cummins engine.

But field tests exposed a number of major problems and only one Big Roy was built. 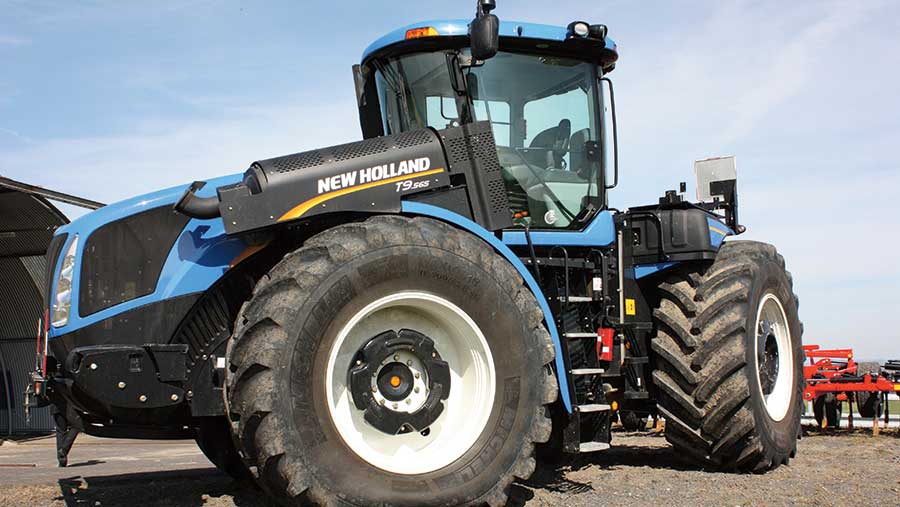 Rated outputs for the latest versions of New Holland’s T9 series are up to 628hp and the maximum output is 692hp, using Fiat Powertrain engines.

The 16F/2E  powershift transmission and the operator can use ground speed management to achieve a CVT-like automatic response to load changes.

The hydraulic output is 159litres/min, with 216 and 428 litre/min pumps on the options list, and a 9t capacity rear linkage is also available. 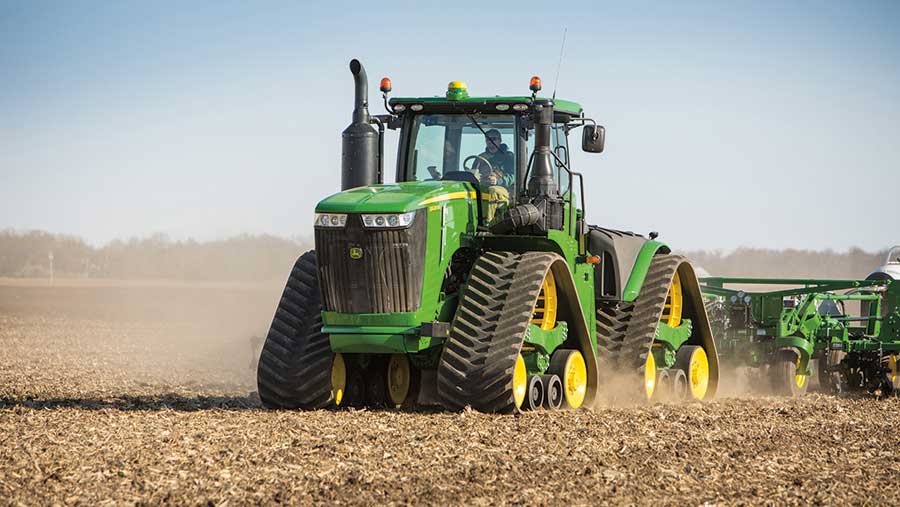 Deere’s 9R series comes in two versions, the 9R on wheels plus the recently introduced 9RX model on four tracks.

Both are powered by a 15-litre Cummins engine producing 620hp rated output and a maximum of 670hp, with the power delivered through an 18F/6R powershift with a 40kph top speed.

Both versions are equipped with a suspension system to give a smoother ride.