The Claas is all geared up for loader work, with brilliant views through the roof window, a clever speed steering system and clutch-pedal-free braking.

However, it was short of power compared with the rest, and its lightweight layout also hampered lift capacity and payload. 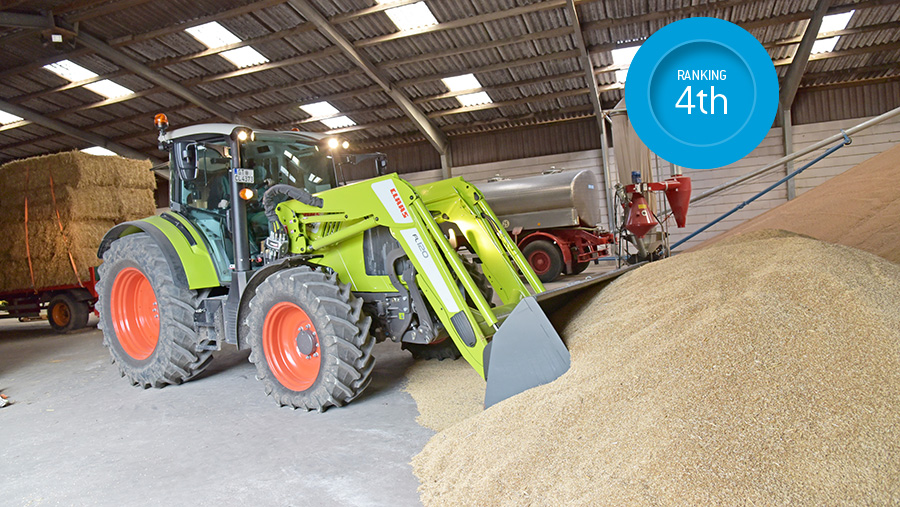 The standout feature of the Arion’s six-post joint is a panoramic roof that provides unrivalled views through the loader’s lift arc.

It also lets in stacks of light, although there’s no windscreen wiper up top so it’ll need an occasional clean if it’s to stay in good working order.

At 2.83m, the Arion sits lower than the other candidates, too, which gives it a better chance of nipping in and out of old livestock sheds without thumping any girders and cracking the plastic roof. 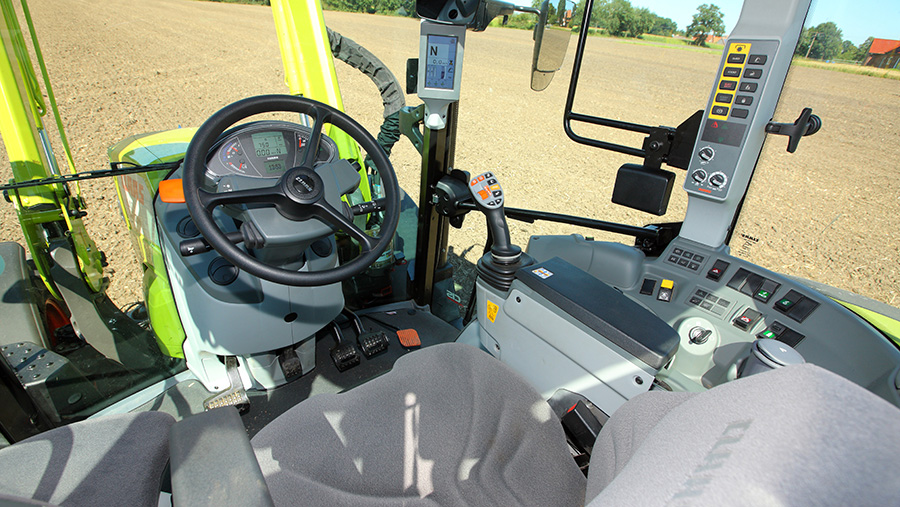 Narrow front pillars also aid the view forwards, although the small rear window and low roofline might cause trouble for taller operators.

Generally speaking, space isn’t abundant, but it’s well-finished and not too far off the standard traditionally set by Fendt.

In fact, it’s more sophisticated than you might expect.

An adjustable armrest carries a loader joystick that is home to all the key controls – linkage, gear shifts and a shuttle – but it’s refreshing to see dials kept for lift speed, draft and alike.

Control labelling is generally sound, although the gang of programmable F-keys can cause some confusion.

These can be set through the colour CIS+ terminal mounted on the A-pillar and navigated by a rotary push button, so there’s no touchscreen function.

The Arion’s engine is sourced from Fiat and delivers 113hp at the pto shaft.

That made it one of the less powerful tractors on test, though torque was almost bang on the group average. 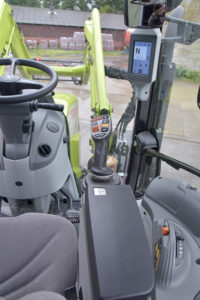 It’s a pretty economical set-up, with diesel thirst low and AdBlue average, and comes with a press-and-hold set-up for cruise speeds.

These settings remain stored even after the engine is stopped and restarted.

Shifts are controlled by a joystick roller, with a single click initiating a powershift step and a second to jump or drop a range.

The first of the auto modes is designed for the field and only shifts through the powershift speeds, while road mode leaps up and down the ranges, too.

It’s possible to tweak the revs at which the tractor makes the shift but, like most manual boxes, range changes can feel lumpy.

Keener operators can also fiddle with start-up gear settings and the harshness of shuttle shifts.

During the autumn, Claas added a brake-to-neutral type function that disconnects the drive without physically jumping on the clutch pedal, along with a steering system that can reduce lock-to-lock steering wheel turns to just one and a half.

It comes with three modes, the most popular of which increases steering speed the more the wheel is turned.

Lift capacity came in at a lowly 4.9t – 430kg below the group average – and the range of motion was also shorter than all but the low-scoring Massey Ferguson.

Two spools are managed by the joystick, with a button dictating whether it controls the rear or mid-mount valves, while a paddle on the console operates the third.