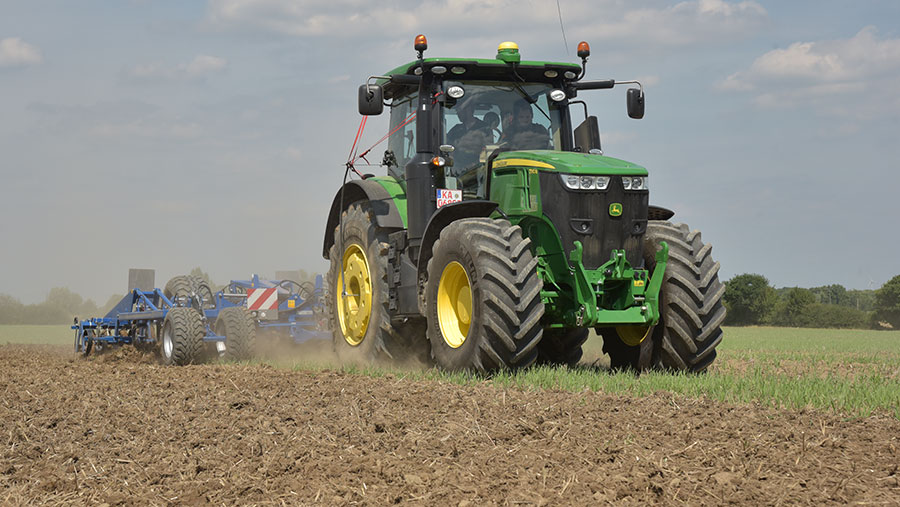 Adding ballast to a cultivation tractor is a time-honoured method of delivering maximum grip and making the most of the ponies it has to offer.

Traditionally this has come in the form of front-end weights, tyre ballasting or wheel weights. But the setback with all these options is that they’re fairly time-consuming to add and remove – a front linkage-mounted block is the only one on the list that’s vaguely convenient.

As a result, extra weight is often carried around when it’s not needed, which has a serious effect on tyre wear, fuel economy and ride comfort.

But in a bid to make the ballasting process easier, John Deere has teamed up with French implement maker LaForge to build the EZ Ballast system, which is now an option on 7R-series tractors built after 2011.

See also: How to fit a fertiliser kit to a John Deere drill

The system consists of a 370kg frame with hydraulic hook arm mounted on the tractor and the 1.7t weight itself.

To connect it, the operator starts by driving the tractor over the centre of the weight. Once the block is between the wheels, they lower the hydraulic hook arm and continue forward slowly until the hook slots into it. The block is then raised into the belly of the tractor, before hydraulic locks secure it in place.

With a little practice, the whole process can be completed in less than a minute, with removal involving a simple reverse of the procedure. Adding the system reduces ground clearance by about 2.5cm, although tyre pressures can alter this figure.

Clearly this convenience comes at a price, with the frame and weight combo costing €11,500 (£10,275), plus assembly. That’s roughly £6,275 for the frame and £4,000 for the weight. To make it more affordable for those running several 7Rs, Deere says each tractor can be equipped with the frame and the weight can be switched between them. 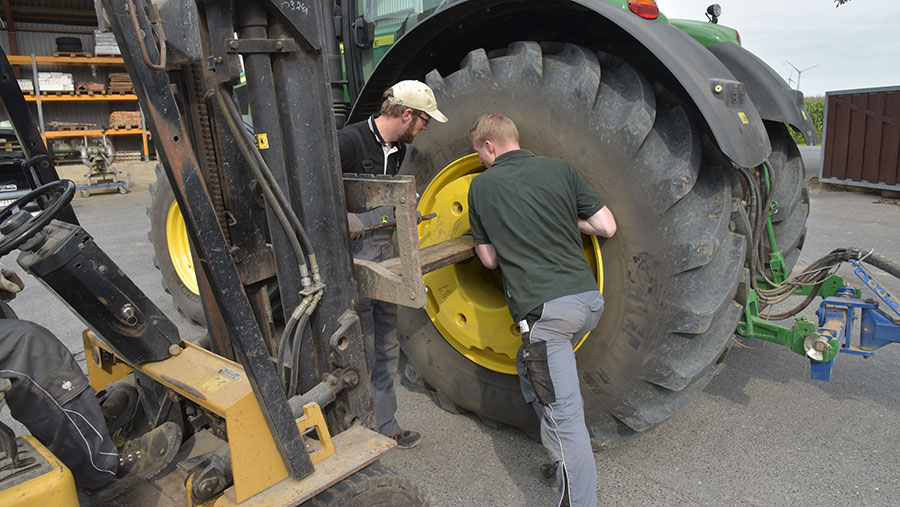 To find out if EZ Ballast is worth the extra outlay, our friends at German magazine Top Agrar put it to the test.

They took a John Deere 7310R and a 4.6m Kockerling Vector cultivator into a dry clay field and tried out eight different options, from no ballast at all to a full 5.3t loading of wheel weights, front-end weighs and the EZ Ballast system.

To measure the pulling power of each setup, the Vector cultivator was fitted with hydraulic pressure cylinders in the drawbar. Meanwhile, a GPS system was on hand to accurately measure tractor speed and wheel slip.

The 7310R was driven as close as possible to its power limit at all times, with the cultivator being pushed down to depths of up to 17cm.

Below we run through the results from each of the ballasting combinations tested:

The tractor on its own weighed 11,770kg. However, this included the basic supports for the wheel weights (140kg) and the 370kg mounting frame for the EZ Ballast system.

With this setup, the tractor’s weight distribution was split 42% to the front and 58% at the rear. Pull forces on the cultivator were the lowest and wheel slip was the highest of all the setups tested.

John Deere supplied its large 1.8t front weight and adding this increased the front axle load by 2.8t to 7.7t.

Consequently, rear weight distribution dropped from 58% to 43%, which improved traction and dropped wheel slip by 5%.

However, due to the bigger-than-normal front weight, the permissible front axle load was exceeded by 1.2t, which is less than ideal. 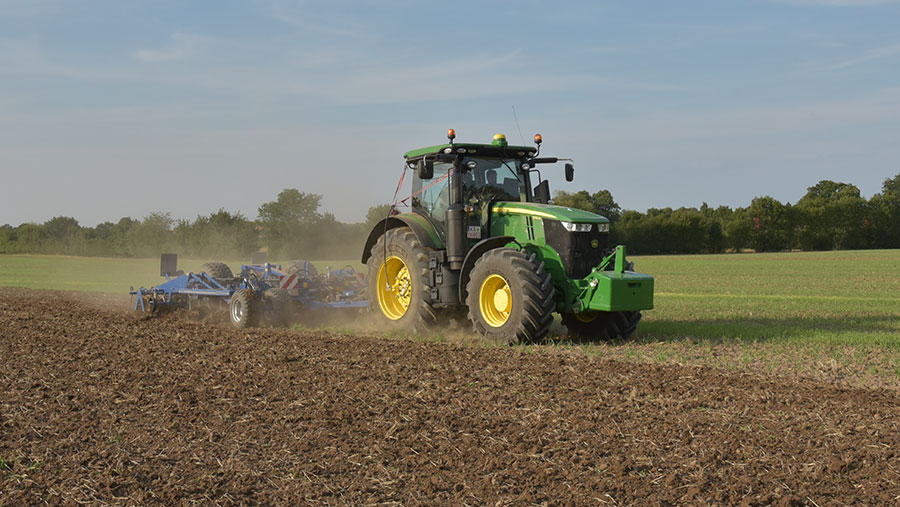 Adding wheel weights increased the total weight by 1.8t over the standard tractor.

This shifted the weight distribution to 37% at the front and 63% on the rear, and due to the load bearing point, they had no influence on the front axle load.

Of all the ballasting options they had the lowest effect on traction, partly due to the already high rear axle load of the tractor

With EZ Ballast, the weight increased to almost the same level as the wheel weights, but the central load point meant it had the same weight distribution as a tractor without any weights.

At slower speeds the tractor with EZ Ballast offered 2% less wheel slip than the wheel weights, but as the speed increased, the two variants were more evenly matched.

The tractor weight increased to 15.4t, with an almost 50/50 distribution. Performance was equal to the front weight-only option, with wheel slip only dropping by 1%. However, the wheel weights had no lifting effect, so the front axle was still overloaded.

The front axle load increased further and peaked at 8.5t due to the central attachment point of the EZ Ballast.

We reckon that with this setup, the front weight can be at least 1t lighter or dropped off completely during faster pulling work to protect the front axle and improve the ride. We found this combination was a better option than the wheel weight and front weight pairing.

This setup would rarely be used as there is no weight on the front axle to offer any grip. For this reason, wheel slip increased slightly.

The maximum ballast of 5.3t will be very uncommon. Although the slip dropped to the lowest value, it’s difficult to justify this as a viable option for ballasting a tractor.

The EZ Ballast can definitely replace the time-consuming wheel weight option as it offers similar traction (and a little more in places) and only takes a minute to hook on and drop off.

Although the front weight-only option performed well in traction terms, it considerably overloaded the front axle. Therefore, using a smaller version in combination with EZ Ballast would probably be the ideal, albeit expensive, setup.

After the traction tests, we cultivated more land with the EZ Ballast and front weight combination versus wheel weights and front ballast.

EZ Ballast came in slightly ahead, only having 8.6% wheel slip, drinking 15.8 litres/ha of fuel, and covering 3.3ha/hour. Meanwhile, the wheel weight option slipped a bit more at 9.3% and guzzled 16.7 litres/ha of diesel. It was similar in terms of area covered at 3.2ha/hour.

That said, we think the system could be more useful for the 6R-series tractors, which would undoubtedly benefit from a bit of extra belly weight to help get the power down.