Deere’s 6R-series has been around for a few years now, but regular updates have kept the tractors fresh along the way.

This latest version comes with a screen and control layout that, for the first time, eclipses Fendt’s offering.

It was missing a few settings, but a whisper-quiet cab and silky drive were enough to secure it top spot. 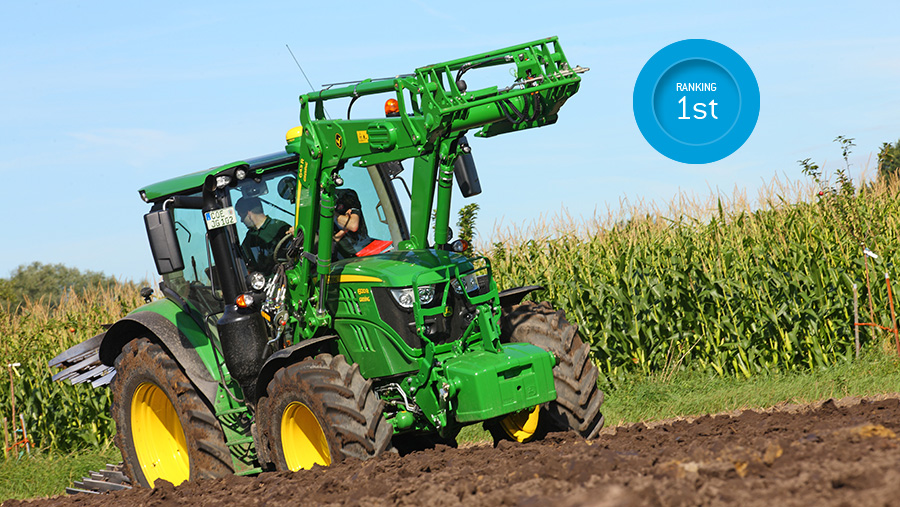 The 6120R’s four-pillar cabin is the same as the ones used on larger-frame 6R tractors and was one of the most comfortable on test.

For the time being, Deere is sticking with its four-pillar design, but apparently plans are afoot to offer a five-pillar version on some of the smaller-chassis models.

This will give a skinnier door on the left side, making it handier to hop on and off the seat.

Our tractor also came with a pair of optional roof windows, which made visibility great for loader work.

But the biggest change is the new screen, which has filtered down from the maker’s larger 7R machines.

This 10in armrest-mounted monitor controls everything from the engine and gearbox programming to the climate control, radio and your phone – if connected by Bluetooth.

This is now slicker and in many ways better integrated than Fendt’s offering, which hasn’t really changed for the past few years.

Deere has also added a series of quick-access buttons on the CommandArm for the most commonly used functions. Unfortunately, the screen isn’t available on the simpler semi-powershift tractors though.

The 6120R’s 4.5-litre four-pot wasn’t the top performer, recording the lowest power output without its 12hp boost engaged. However, for transport and pto tasks its output of 123hp managed to nudge it ahead of the Claas, Massey and Fendt.

Max torque was below the test average both with and without boost, but we’re looking at small differences here, so it won’t necessarily feel underpowered in the field. 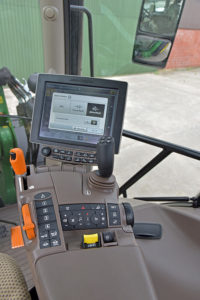 In the fuel consumption test the Deere was also the highest diesel burner, but its frugal use of AdBlue – thanks to the addition of exhaust gas recirculation and a diesel particulate filter – brought its overall running costs closer to the test average.

Our test tractor came with John Deere’s well-known AutoPowr transmission, which is built by ZF.

For various reasons, this isn’t a hugely popular option on UK tractors, particularly at the smaller end of the market.

However, it’s got a much bigger following in Europe.

To drive, it couldn’t be much simpler.

For this latest generation, Deere has added a car-style cruise control, which can be activated using a button on the side of the hand throttle.

We found this particularly useful for ploughing as you can set off on the foot pedal and then press the button when you get to a speed you’re happy with, before stepping back on the pedal or brake to take control again. 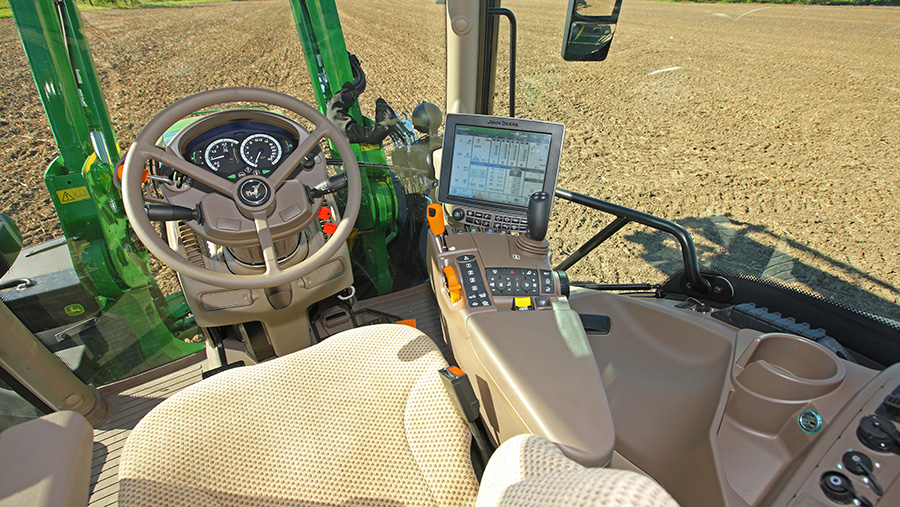 The 6120R’s slick linkage control is well thought out, simple to use and we particularly liked the depth stop, which is set using a button on the side of the dial.

Simple controls in the screen adjust drop speed and lift height, but there are also dials for the technophobes.

Its lifting capacity of 5.2t put it just below the group average, but its slick operation helped make up for its lack of out-and-out lifting power.

The Deere’s hydraulic performance was a stong point, with it managing to record 121-litre/min flow at one valve. That means it will be dynamite for tipping a trailer.

Massey Ferguson offers four models in its drop-nose SL-series from 100 to 130hp, and the 5713 we tested is the most powerful of the bunch.

The 5700 range was launched at Agritechnica in 2015 and comes in two different spec options – Essential and Efficient.

Buyers can also choose from two semi-powershift gearboxes including the entry-level Dyna-4 gearbox or the slightly more sophisticated Dyna-6 we tested.

The 5713 is by no means a bad tractor, but a fairly uninspiring set of results across the board meant it slid into last place.

The Dyna-6 gearbox was probably its finest component and it has to rank as one of the best semi-powershift gearboxes out there, with slick auto-shifting, impressively accurate speed matching and a great shuttle. However, when you start playing around with the settings it can send your head into a spin.

But the biggest thorns in the Massey’s side were its sluggish hydraulic performance, weak rear lift capacity and a slightly old-school six-pillar cab. Now Valtra has brought its cabin up to scratch this is the most dated in the test, and it can feel a little cramped.

Massey’s Datatronic screen is also a black mark for us. On the one hand it offers plenty of functions, but its clunky and confusing operation means its one of our least favourite systems on the market.