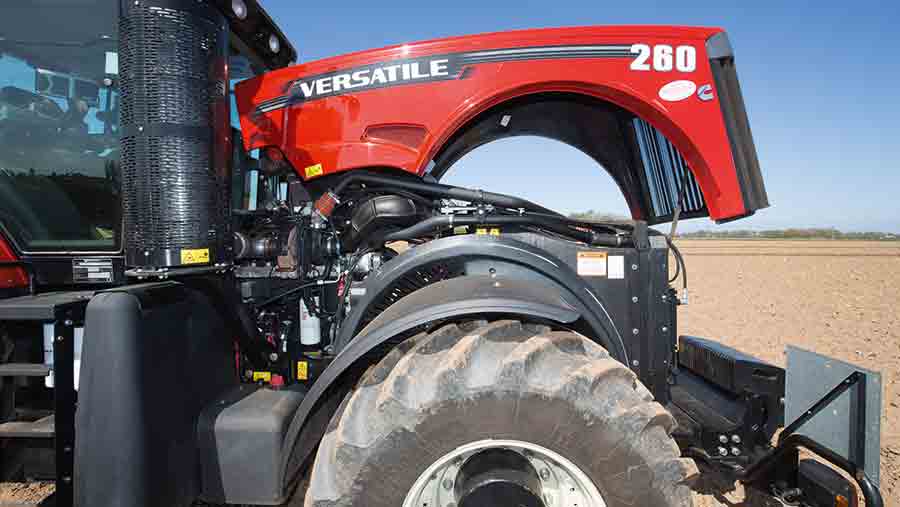 Farmers in the market for a modern, high-horsepower tractor are increasingly getting lumbered with bundles of expensive, techy equipment, whether they want it or not.

But while most makers obsess with adding extra buttons, switches and screens to Europe-bound tractors, the North Americans seem committed to keeping raw grunt and simplicity their number one priority.

So for shoppers in search of power without complication, the arrival of Versatile’s no-nonsense, 260-310hp range on UK shores will be welcome news.

And as an added bonus, the Canadians’ combination of low-revving block and basic powershift transmission comes in a good bit cheaper than rival machines from the likes of John Deere and Case.

We got behind the wheel of the entry-level 260, teamed to a 3m version of TWB’s Terminator, to see how it measures up. 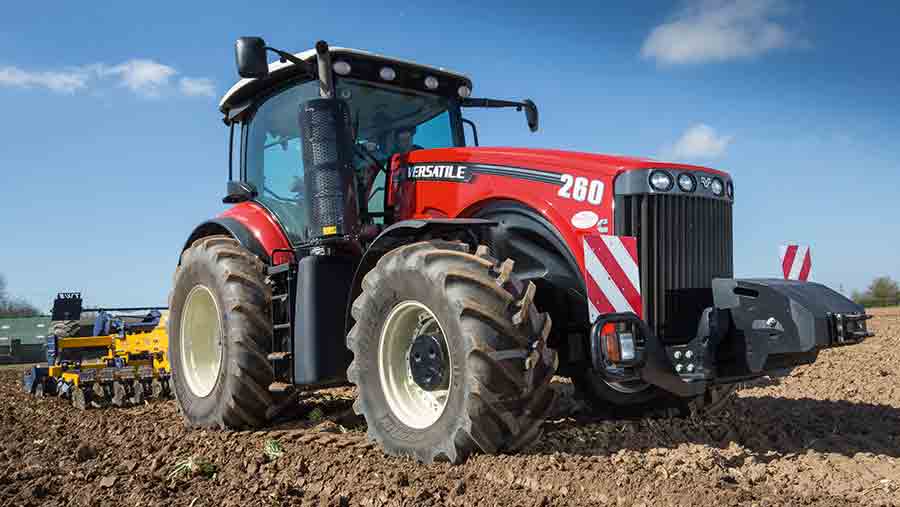 The 260 is an ungainly-looking thing, as most high-horsepower American tractors tend to be. There are striking similarities between it and John Deere’s old 8030 series in particular, with a long, wide droopy bonnet that hangs well over the front axle.

Most of that is the result of a cavernous gap between the radiator and the front of the engine, which is fitted well behind the front wheels.

It means the wheelbase is a good bit longer than a John Deere 8R and it can be a clumsy customer when it’s not in the field, but deep cut-outs in the front chassis castings make the turning circle look surprisingly good on paper.

Unlike many of the mainstream tractor-makers that are forcing more and more power out of modestly sized blocks, Versatile says it is committed to keeping higher-displacement, torquey engines.

The maker has also vowed not to stray from Cummins powerplants, which will be good news for fans of the American-built oil-burners.

The result is a stubborn, gutsy motor. We had it teamed to the same TWB cultivator featured in our September test of the more powerful Deutz 9340 and it showed no signs of waning.

Admittedly the sandy soil was a little more forgiving this time around, but it was still determined to plod on down at 1,200rpm and in eighth gear.

The engine also has a cruise mode. It’s pretty unsophisticated, but basically pours more juice into each cylinder to maintain revs as the going gets tough. Ideally there would be a second speed setting to drop revs and noise down a notch around the headland.

There’s something reassuring about the meaty roar of the six-pot, but it would probably wear thin after a day in the cab. The rattles and graunches that come with turning the tractor off are less satisfying, and hint at the slightly crude nature of the Versatile’s build.

While we are on the subject of engines, it’s worth mentioning that emissions are currently sorted by gas recirculation and a filter housed in the exhaust, but AdBlue is expected to be added by the end of the year.

The combination of the big engine and simple powershift box is a match made in cultivator-pulling heaven.

The 16-speeder is Japanese-built and connected to Versatile’s own differential, brakes and back-end.

However, there’s no shuttle. Usually we would have a good moan about the lack of a left-hand shifter, but because the 260 is destined to spend its days in the field and almost nowhere else, we’ll let it off.

If you do want to change direction, you just nudge the joystick forwards or backwards, making sure you press a safety button on the back first.

Powershift steps are also selected by buttons on the joystick’s flank. There’s an auto mode too, but with no way of setting any speed limits or how much it revs in each gear it’s only really of use on the road.

How does it pull?

Total weight comes in a smidge under 12t, meaning it carries just as much timber as some tractors packing an extra 100hp or so.

The long wheelbase sees weight spread pretty evenly across the two axles, much like an old, long-nosed Valtra. There’s no front linkage option, but there’s still space to cram a load of wafer weights up front and the small-for-its-size 710/70 R38 boots never seemed to struggle for grip.

Fans of larger-diameter tyres will be pleased that 42in rims can also fit under the rear arches.

The back-end is a pretty basic affair. There are two pto speeds – 540 and 1,000 – but it’s an old-school swap-the-shaft job to switch from one to the other.

There’s also currently no pick-up hitch, but UK importer JPM Agri is working on sourcing one to fit to future tractors, so it shouldn’t be a problem. 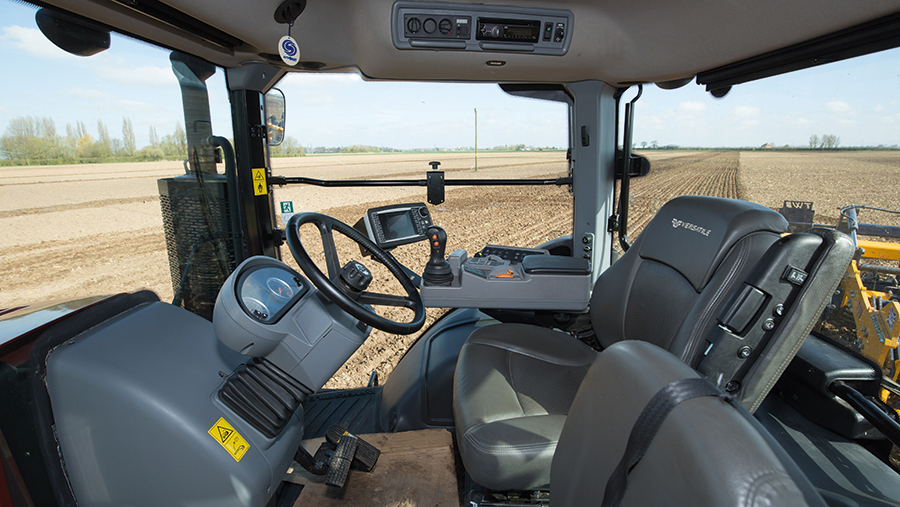 The four-pillar glasshouse is almost identical to the version used on the monster Delta Track.

It’s plenty big enough, but there’s very little storage space to stash all the bits and bobs found in the average tractor cab.

The driver’s seat is comfortable and the passenger gets a tidy leather number. There’s no cab suspension yet, but Versatile is working on a system that should be sorted in the next year or so.

Our test tractor had no axle suspension either, but we are told this will be available on later models and will possibly be introduced alongside a 50kph transmission.

The fixtures and fittings have a fairly low-end finish and the dials on the dash could do with being slightly bigger and clearer. The armrest is also littered with blister buttons of identical size and shape, which can make it hard to find what you’re looking for by feel alone. 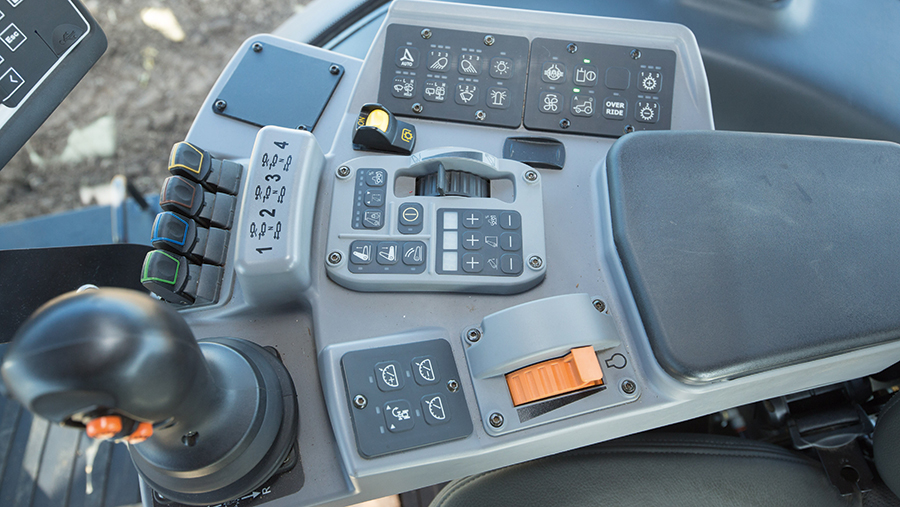 The big armrest also carries a fairly sizeable screen, which makes it look a good bit cleverer than it actually is. At the moment its sole duty is to adjust the flows and timers for each spool, though the Versatile geeks are beavering away building new software to include more-sophisticated monitors and Raven-based guidance.

The 260 is a huge tractor for its horsepower rating and from the seat you would be forgiven for thinking you were sitting on something of well over 400hp.

With that in mind, the gutsier 310hp version is probably a better match for the hefty chassis. However, as most components look the same throughout the range, a tune-up would probably get the 260 churning out similar power.

The lack of front suspension and a lumbering 40kph transport speed is a downer, though, and means it’s really only suitable for raw tillage jobs and the occasional short hop between fields.

Niggles aside, the 260 offers plenty of power for its price tag, is simple to use and is likely still to be running when some of its CVT rivals have given up the ghost.

Versatile in the UK

Versatile announced its return to UK shores with a bang two years ago with the launch of the Delta Track.

Since then it has sold eight of the Quadtrac-rivalling crawlers across the eastern counties through Lincolnshire dealer JPM Agri.

With the big boy now firmly established, JPM has added smaller conventional tractors to its line-up. Currently there are three models from 260hp to 310hp, but there are 340hp and 360hp models in the pipeline.

Versatile also has plans to add a handful of smaller, multi-purpose tractors starting at 170hp. These will have a 6.7-litre Cummins six-cylinder engine and the option of a stepless or powershift transmission, and will no doubt broaden the appeal of the traditionally high-powered brand.