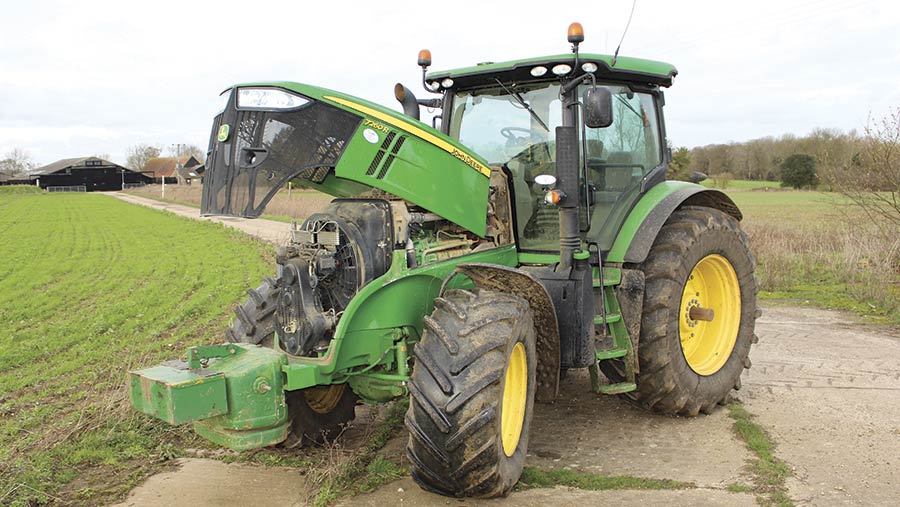 The John Deere 7260R we inspected with Ryan Fletcher

Most farmers would back themselves to spot a dodgy tractor a mile off, but a burgeoning agricultural business is offering an impartial inspection service that goes a bit further than lifting the bonnet and giving it a quick run down the farm track.

Ryan Fletcher’s new venture, Elite Associates, involves a thorough tractor inspection to produce a dossier for the buyer that outlines its exact condition.

The negotiations remain the buyer’s responsibility – Mr Fletcher purely arms them with a bit more information – and nor does he offer a warranty.

The idea for the business came from his work in various service roles with Agco, CNH and John Deere over the past decade, where he regularly watched buyers part with thousands of pounds for machinery they had never seen.

Although Mr Fletcher is aware that his service won’t appeal to everyone, one of the main benefits is his ability to make an impartial decision, with no emotional attachment, on the suitability of the machine.

Searching for a specific machine online can be the ultimate thief of time. For most buyers, the second stage involves viewing the tractor in the flesh, but Mr Fletcher says farmers’ keenness to get a deal over the line often means they turn a blind eye to potential problems.

“By employing someone who doesn’t have an involvement in the purchase, the inspection can become more matter-of-fact,” he says.

“Sometimes condition and faults can be overlooked, fuelled by the desire to own a vehicle you’ll be spending a lot of time in. My job is to provide an honest, factual report on the condition and spec of the machine and check it is as advertised.”

Inspections can take place on any tractor, regardless of age and warranty cover. However, the reality is that lower-value vehicles carry less risk to the buyer, so it’s more difficult to justify the expense of an inspection.

What does the inspection involve?

Mr Fletcher will arrange to see the machine, usually within three days of being notified.

“Inspections usually take around three hours, but I will be with the machine until the job is done. The logbook and service history are both required and if they aren’t available, we’ll insist that copies are sent after the visit, or go to the dealer to get them.”

These are studied to make sure they are legitimate and that there’s nothing of concern.

HPI checks are also carried out. Tractors, like most vehicles, will transfer with any outstanding finance so it becomes the new owner’s problem once the sale is completed. 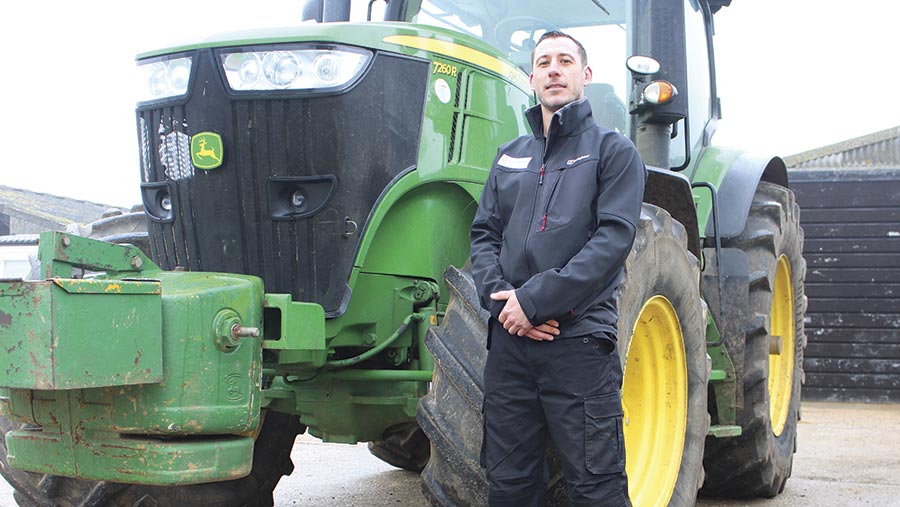 Mr Fletcher says he is surprised at how rarely this is checked, given the amount of finance taken out on new tractors.

Everything is digitally documented, with pictures and close-up shots of specific defects – a typical report may contain more than 250 photos.

A visual check looks in-depth at the usual weak spots. These vary, but common issues include worn mudguard pivots and broken grease nipples, which Mr Fletcher says highlight a “telltale sign of a maintenance – or lack of, in some cases”.

Damaged engine catches and elongated holes around pins, especially on front linkages, are often revealed, while little things such as drawbar condition and the inclusion of weights, drawbar and link balls will all contribute to extra expense after the sale if not clarified.

Tyres are checked for bulges and cracks, and the date of manufacture is noted down. This is particularly handy for spotting if rubbers are older than the machine, which could indicate that it has had a hard life.

Carrying out a pressure test on the hydraulic system will give a good idea as to the health of the pump.

“This is a job that most farmers won’t do when looking at a second-hand machine and it does add a big value to our service,” Mr Fletcher says.

Spools can be checked to make sure the flow reflects the size of pump and this is a quick way to establish if the pump advertised is actually the unit on the machine.

It is also possible to up the pressure and check how the flow reacts – if it falls away rapidly then a failing pump is the likely culprit.

The tractor’s air and hydraulic trailer brakes are also subject to a pressure test and the results compared with the manufacturer’s guidelines. 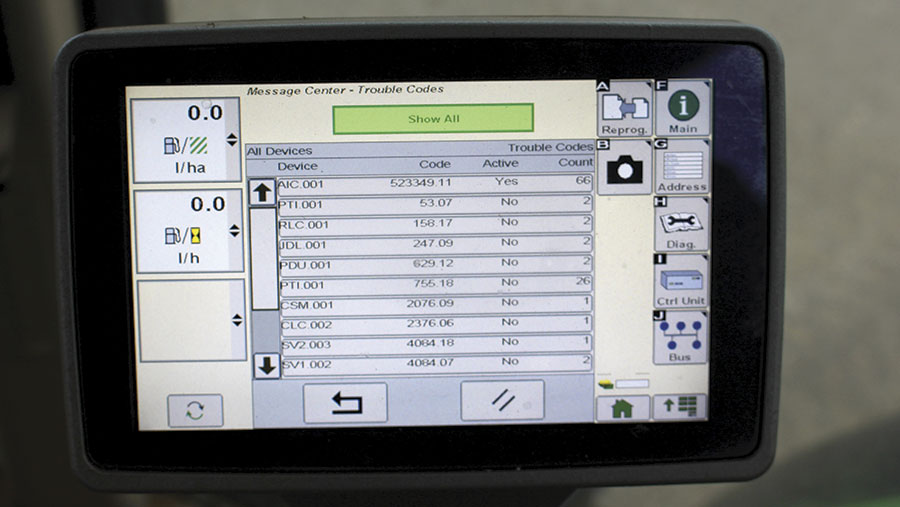 “Another potentially missed area is how the front linkage receives its oil flow,” Mr Fletcher says.

“If the feed has been tapped into one of the rear spools rather than being fed by a dedicated supply, it won’t be possible to use both front and rear valves at the same time. For those running triple mowers, this could be a deal breaker.”

On request there is the option of a dyno to test power output at the pto. Mr Fletcher also carries refractometers and battery testers to every inspection.

Even if the machine’s warranty is still intact, there are key areas this may not cover, such a lights and stabilising arms, or any damage caused by the owner or operator. 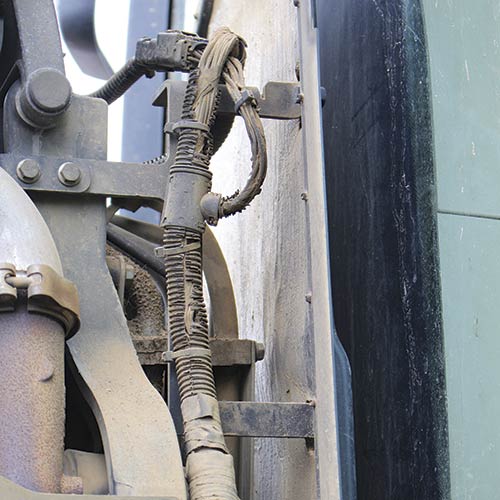 Missing conduit on this wiring could potentially lead to a fire

Farmers Weekly looked around a John Deere 7260R with Mr Fletcher and he pointed out some exposed wires at the back of the engine that had lost their protective conduit.

This left the wires exposed to the searing heat of the engine and meant they could already be damaged internally and could potentially present a fire risk.

Mr Fletcher says: “Although it’s an upfront fee, this service shouldn’t cost the buyer money as any defects found should influence further negotiations for a better price or repairs to be sorted pre-delivery.

In most cases, I anticipate a far bigger saving than the price of an inspection.”

The service is being pitched in the region of £850 for a tractor with a value of £50,000. Each inspection is tailored to the customer’s requirements and this is reflected in the price.

While there is no warranty offered on the tractor by Mr Fletcher, he has insurance to cover any claims if his reporting is found to be inaccurate. 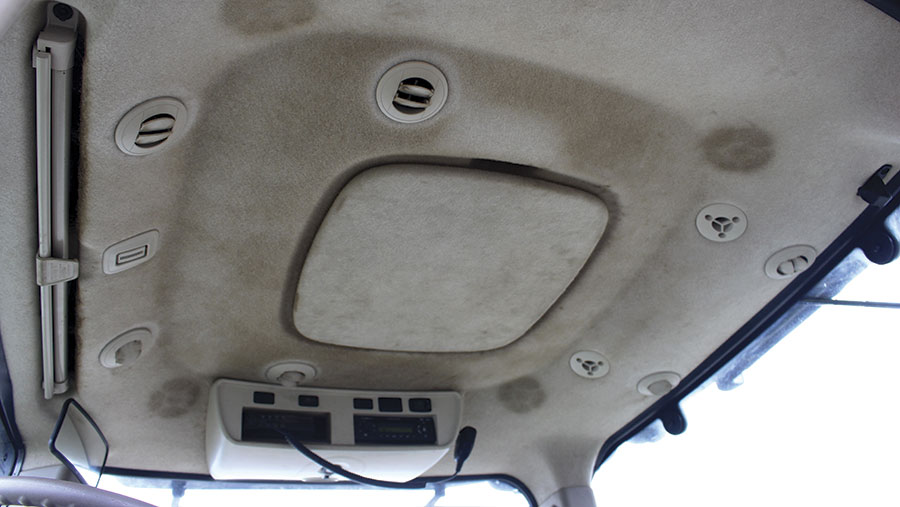 While it might sound expensive, it takes only a few minor defects to have the inspection fee almost paid for, he says. It’s also worth factoring in the potential costs in fuel, accommodation and time if you carry out a viewing yourself.

Verbal feedback takes place immediately after the inspection, with a detailed report and accompanying images usually sent over within 48 hours of the visit. It is then up to the buyer to make the decision.

The business is in the early stages but there are big plans for the future, with inspections of combines and cultivators both possibilities.