Major updates for the Case-IH Magnum, Fendt 900 Vario, John Deere 6 and 8 families, and New Holland T5 and T8 lines are among the changes for this year’s Ultimate Guide to Tractors.

In several cases, feature and specification upgrades have been timed to coincide with the introduction of engines to meet European Stage 5 emissions rules.

In others, the focus is on connectivity – the ability of the tractor to communicate with implements, other tractors and farm management software via cloud-based platforms.

That certainly applies to the Case Magnum line-up, now referred to as the “AFS Connect” range with fresh styling, a new seat-mounted console for the main controls and info terminal, and new electronics infrastructure for data collection and sharing.

In terms of models, the range has been cropped somewhat, with the 315/351hp Magnum 280 being dropped, along with the powershift version of the 417/435hp Magnum 380, which remains available with the CVXDrive stepless transmission and is the sole Rowtrac machine with rear tracks.

Claas has dropped the 75-103hp Elios 200 range and the 250hp Axion 840, but introduced its first half-track option with 355hp and 445hp versions of the Axion 900 Terra Trac. These use the familiar parallel belt track design, rather than the triangular configuration favoured by others.

The four-track version of the Xerion revealed by Claas at Agritechnica is not currently in the UK range, but there is a new “entry-level” model which, at 462hp, has 27hp more than its predecessor.

Along with more torque, the tractor has a lower idling speed and the latest seat-mounted control console with Cebis display – features that also apply to the other Xerion models.

SDF has dropped the Agrokid compact and 65hp version of the 5D Keyline series from the Deutz-Fahr line-up – along with equivalent Same models – and also the 312hp version of the 9-series, leaving just 295hp and 336hp versions.

Fendt’s new 142hp 314 Vario with its Dynamic Performance feature provides up to 10hp of extra power when the lights or air conditioning are switched on, or when the tractor is engaged with static or on-the-move pto-driven equipment or there are high demands on the hydraulics systems. 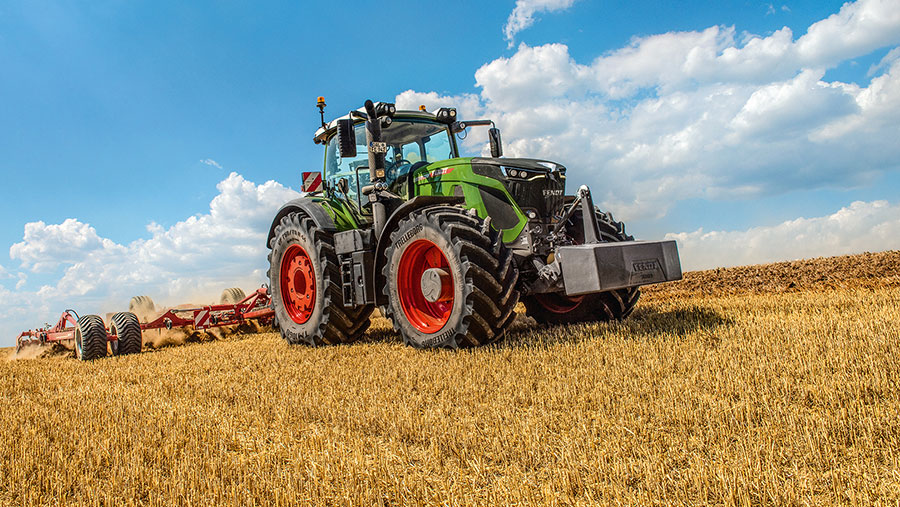 There is also the Generation 6 transformation of the 900 Vario into a down-scaled version of the 1000 Vario, with top model power output exceeding 400hp for the first time.

A new cab and features such as the stepless powertrain that can regulate drive and torque distribution to the front and rear axles individually are part of the package.

At JCB, a Stage 5 engine switch has been made alongside upgraded axles for the Fastrac 4000-series tractors and active front suspension for the bigger 8000-series machines for the first time, with both designs getting increased load- or implement-carrying capacity. 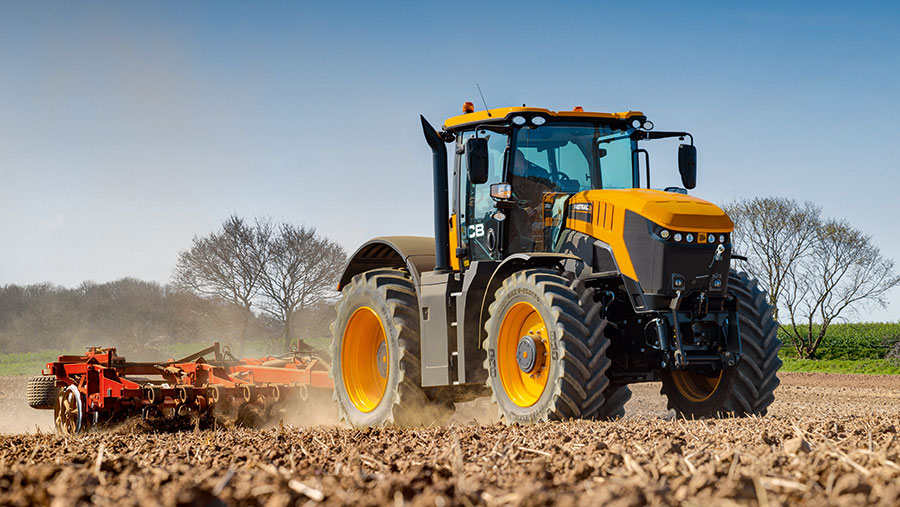 Numerous changes to the John Deere line-up see the 6MC and 6RC models being dropped in favour of a revamped 6M-series of four- and six-cylinder tractors, plus a new 7R-series shifting upwards in power outputs.

Likewise, the 8R-series has a new look and model identity, as well as a more powerful model, with the e23 powershift transmission developing 443hp for draft work and 458hp when Intelligent Power Management engages. 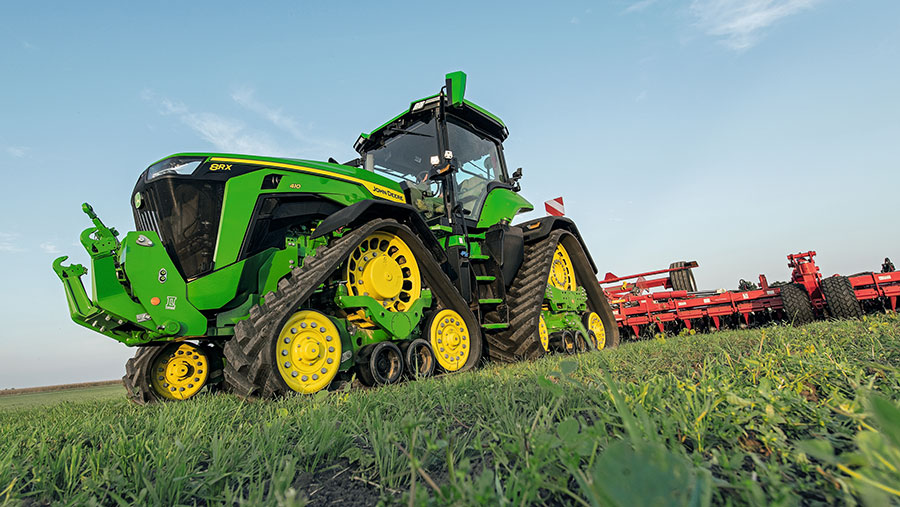 The 410 is available in wheeled 8R, twin track 8RT and new four-track 8RX formats, the latter being the first factory-produced quad track tractor at this power level.

Along with its three siblings starting at 341/357hp, these are available with AutoPowr stepless drive in addition to the e23 powershift.

For high-clearance applications, the Landini 5-D HC tractors have given way to the 5-series with a little more power (now from Deutz with simpler emissions control hardware), and increased hydraulic pump output and lift linkage capacity.

Massey Ferguson has dropped its 75hp model from the range entry MF 4700-series and the Dyna-4 powershift option from the six-cylinder MF 7700 S line-up.

New McCormick X7 VT-Drive stepless tractors revealed at Lamma with 180-240hp are not yet listed and the bigger X8 models have quietly adapted to Stage 5 rules with a new cab roof and LED lighting installations.

In the New Holland line-up, Dynamic Command versions of the 110-140hp T5 models are listed for the first time, featuring a new 24×24 transmission with eight powershift steps.

Also, the latest T8-series marks the introduction of a much more comprehensive connectivity infrastructure for collecting data, saving it to farm management records, and communicating effectively with implements. 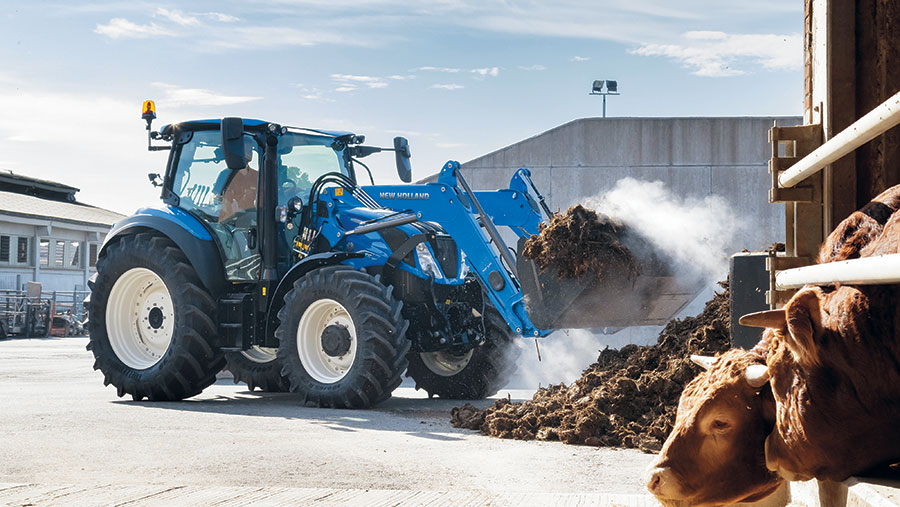 The line-up is slimmed down by dropping the 284/320hp model, but there is now a version of the T8.435 Genesis with a 21×5 powershift transmission and 435hp for both draft work and pto applications, whereas the Auto Command gets that engine performance for pto work only.

Solis has a revamped line-up in the listing with just 50hp and 75hp models surviving, while the Valtra range remains largely unchanged save for a 57kph top speed option for selected N and T Series models.

In the Zetor range, only the most powerful 171hp version of the six-cylinder Deutz-engined Crystal remains available in the UK.