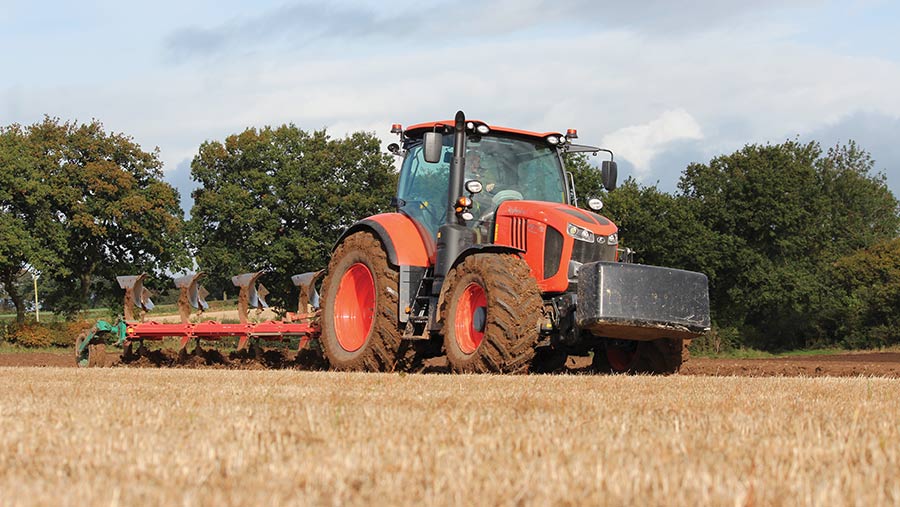 Kubota’s battle to become part of the 150hp-plus conversation took a new twist last month after HRN, one of Scotland’s biggest machinery dealers, penned a deal to sell and service its equipment.

The move is a major coup for the Japanese manufacturer, with the six ex-John Deere depots offering unrivalled access to a huge tractor market.

However, it will draw sharp focus on the thinness of Kubota’s high-horsepower line-up and the lack of a six-cylinder equivalent to compete with the likes of Deere’s big-selling 6155R and 6215R – leaving HRN’s loyal customers in a bit of a quandary when it comes to replacements.

It’s a hole that both the manufacturer and its growing list of dealers will be keen to fill, and the groundwork is already under way, with the company unveiling its first ever inline-six block in the US earlier this year.

This may well form the centrepiece of its own 200hp M8 range that, when finished, will break new ground for a company that has traditionally specialised in ride-ons and paddock tractors.

Curiously, there are already several machines with that moniker on sale in North America, where Versatile’s 175-210hp Nemesis has been dressed in Kubota’s trademark tangerine livery.

However, its 6.7-litre Cummins engine, powershift transmission, basic cab and unimpressive rear lift apparently mean it’s not fit for the European market in its current guise.

Instead, the company intends to ramp up production at its own assembly plant in Dunkirk, France, and, for now, focus on the three-model, 130-150hp M7 range, which has remained largely unchanged since its launch five years ago.

Watch the video of the Kubota M7173 on test and read the full report below.

The flagship M7 model – the M7173 – is tuned to a heady 175hp with boost and its vast 6.1-litre displacement should, on paper at least, offer a decent match to equivalent six-cylinder tractors in terms of power, torque and, more broadly, rear lift and hydraulic output.

It has plenty of high-powered four-potters for company, with tractor makers shifting to smaller engines that they can work harder and hotter to overcome the strangling grip of emissions regulations. 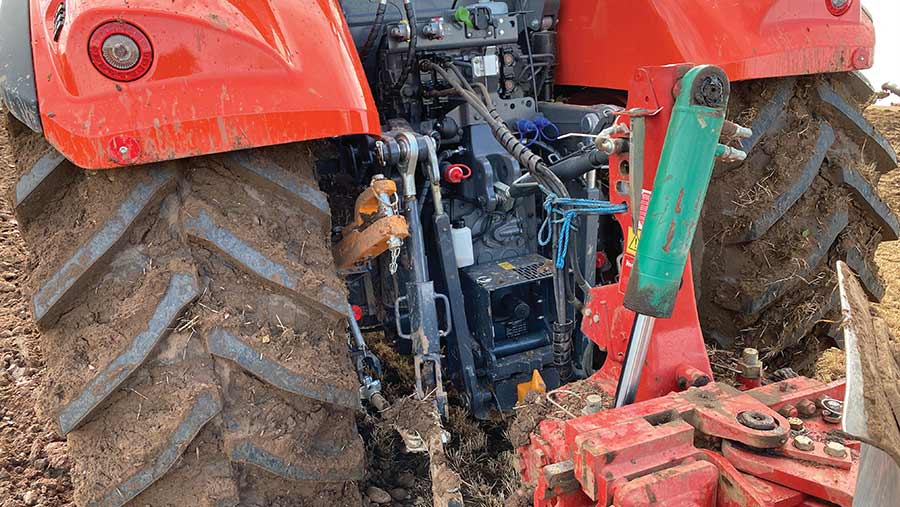 Fortunately, this step change offers a handful of potential benefits to customers, too. For starters, the engines are thousands of pounds cheaper, allow plenty of poke to be shoehorned into a modest frame and, as a result, are more manoeuvrable.

They’re also considerably lighter, which has its benefits where haulage, spraying and secondary cultivations are concerned.

And while the likes of Valtra and Massey Ferguson use a comparatively diddy 4.9-litre engine to produce over 200hp in their N174 and 6718 four-potters respectively, Kubota reckons its choice of big-bored block comes under considerably less stress and should be good for 50,000 hours if it’s looked after.

The large displacement also delivers a high constant torque level from 1,200-1,600rpm (the peak comes at 1,500rpm), which means revs can be kept relatively subdued while still delivering the pulling power.

As well as muffling cab noise, in theory this should keep diesel consumption low and, in our short stint in the seat, we averaged a very respectable 22 litres/hour pulling a five-furrow plough. It relies on good ballast, though – we had a 1,450kg block to keep the front wheels biting into terra firma.

It means there’s very little to split the two bigger models, but they’re also priced within a few hundred pounds of one another, so there’s little to gain from picking the 150.

Other manufacturers only make this extra poke available at high speeds or with the pto under load, but M7s dish it up all the time the tractor is moving above 2kph, to the benefit of pretty much all fieldwork tasks.

Engine-mapping tweaks forced by the move to Stage 5 emissions standards have also made maximum power available at 1,900rpm, down from 2,000rpm on the old models.

The company has traditionally relied on a particulate filter (DPF) to manage exhaust nasties – following the same path as John Deere – with AdBlue added to its tractors five years ago to hurdle the more stringent limits.

However, these latest M7s no longer need the old low-pressure EGR system and Kubota has managed to double the DPF cleaning interval to 6,000 hours. It also now offers an exchange service for old filters in conjunction with Volvo’s trucking department.

At a cost of £650, customers are given a second-hand reconditioned unit in return for their old one, which is claimed to last up to 50,000 hours if owners keep on top of the ash build-up.

Most 150hp M7153s are ordered with ZF’s Terrapower five-range, six-speed gearbox, which (finally) offers an Xpress stop/start function on the brake pedal to save constant declutching.

Those wanting a slicker driving experience can have the ZF-sourced KVT stepless Terramatic transmission, which accounts for the lion’s share of 170hp sales.

The Terramatic setup is also used by the likes of Deutz-Fahr and has four auto-shifting ranges with a hydrostatic element to deliver butter-smooth and largely imperceptible range changes that happen at 7kph, 14kph and 29kph.

However, it’s one of the less sophisticated and slick CVTs on the market and we found that engine revs tended to wander as the tractor drifted between the four mechanical ranges.

To keep this behaviour to a minimum, it’s best to try and settle at the fully mechanical point roughly in the middle of each range, where the driveline will also be working at maximum efficiency.

The downside, obviously, is that a lot of fieldwork takes place around 8kph. It means the hydrostatic element is in play, albeit never transmitting more than 40% of total power, and there’s plenty of whizzing and whirring in the cab as the transmission jumps around.

Keen operators can tweak the droop – how much the tractor favours power over economy – and acceleration. The latter can be dialled right up for full-speed trailer towing, or calmed down to deliver a smoother, less tetchy driving style in the field.

There are also two virtual speed range settings. But unlike on Fendt’s Vario, these have nothing to do with the mechanical workings of the transmission, so there’s no risk of cooking things by running in the higher range on heavy tillage tasks.

Instead, one simply limits forward speed to 20kph, reducing the sensitivity of the pedal and joystick to give the operator more precise control.

The other gearbox settings are pretty standard fare, including a forward cruise speed that is engaged by a button on the joystick. Irritatingly, it has to be disengaged the same way – a quick jab of the throttle does nothing to stop the tractor barrelling towards the hedge at the end of a bout.

M7s come kitted out with the same four-post cab frame as the smaller stockman-spec MGX range. Wafer-thin pillars and acres of glass serve up good views and let loads of light in, but the major downside is the relentless glare on the Tellus touchscreen (not helped by its dark background) that makes it hard to see.

The KV-sourced Tellus – one of the gems that came from Kubota’s investment in the cultivation maker – is standard on KVT models.

It’s mounted to the armrest and there’s no disputing its ease of use, allowing operators to quickly shunt spools to different controls and view tractor guidance, work monitors and linkage position all at the same time. 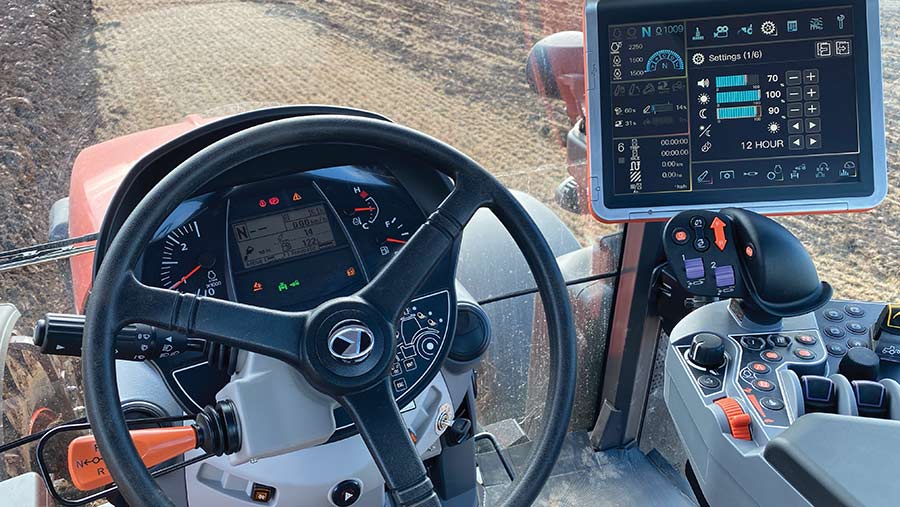 Anyone wanting one of the smaller models and shopping on a tighter budget can have the 7in ‘Go’ version, which is still Isobus-compatible.

Controls are neatly arranged on the armrest and the lack of clutter makes everything easy to identify.

However, joystick ergonomics aren’t a strong point and nothing seems to fall quite to hand, there’s no detent on the linkage depth control wheel and the radio is liable to get covered in dust in its position at the base of the B-pillar. 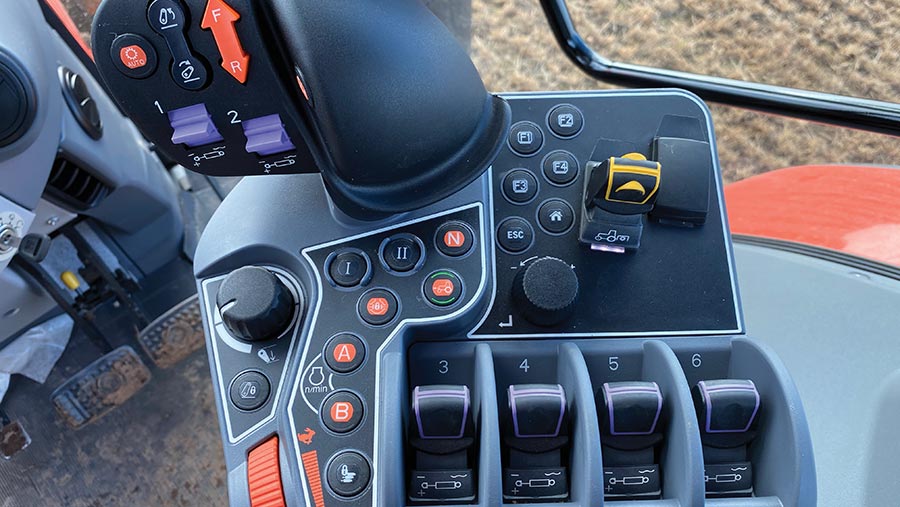 It’s symptomatic of Kubota’s decision to repurpose the MGX cab – and experienced drivers of high horsepower tractors will probably be underwhelmed by the standard of the finish.

Cladding and controls are distinctly cheap and plasticky, but some minor fettling at the Kubota R&D department would soon have most of these shortcomings solved. Its saving grace is its quietness, though it has more to do with the low-revving engine than any high-tech sound deadening.

Speccing the £2,800 auto-steer package adds four-stage steering ratio adjustment, which can reduce the number of turns from lock to lock to just 1.5 at speeds below 18kph.

It’s handy in principle, particularly if you’re pirouetting around a yard with a loader on the front, but it can’t be included in a headland turn sequence.

This makes it all but redundant for non-guidance arable work such as ploughing, unless operators can be bothered to go to the trouble of switching it on at the end of each bout.

It’s also worth noting that the tractors have a Dana front axle, so don’t get the nifty bi-speed steering system that delivers a 9m turning circle on the M6 and MGX.

One higher-tech addition that may be more useful is Tractor Implement Management, which allows implements to control tractor speed to ease baling jobs.

Keen deals and extended warranty options have put Kubota on the 150hp map, but arable demand will always be limited by the lack of a six-cylinder option.

That said, the M7173 still offers the torque, lifting capacity and versatility to compete.

The cab is bright and airy, too, but would really benefit from some improvements if it is to convince a bigger number of tractor drivers to make the switch from another brand – particularly when, in most cases, they’re more expensive than an equivalent Case or New Holland.

Ever since Kubota splurged billions of pounds on Kverneland in 2012, and Great Plains four years later, it has been incessantly linked with the purchase of a tractor maker with an established high-horsepower range.

However, it is yet to open its cheque book, instead focusing on the development of its own big tractor portfolio that will eventually allow it to make the most of the 3,000 tractors/year capacity at its assembly plant in northern France.

The site is currently charged with producing the three-model M7 range, which runs from 130hp to 170hp and includes powershift and CVT gearbox options. There are now 650 of these tractors on UK farms – a respectable figure considering the company is selling to a new customer base.

Below that comes the Japanese-built M6002 series, which was unveiled earlier this year and offers the same engine, cab and similar spec levels to the M7s.There are 121hp, 131hp and 141hp variants, each with a 20hp boost. There’s no CVT option, though – only a three-range, eight-speed powershift.

Buyers wanting the simpler things in life can go for the long-serving MGX range, which runs from the 104hp M95 to the 143hp M135. The two smallest models carry four-cylinder, 3.8-litre engines, while the trio at the top get the same 6.1-litre engine as used in the top spec M7, making it the largest capacity engine in the sector – albeit heavily derated. There’s also an M5 range, which tops out with the 113hp M5111.