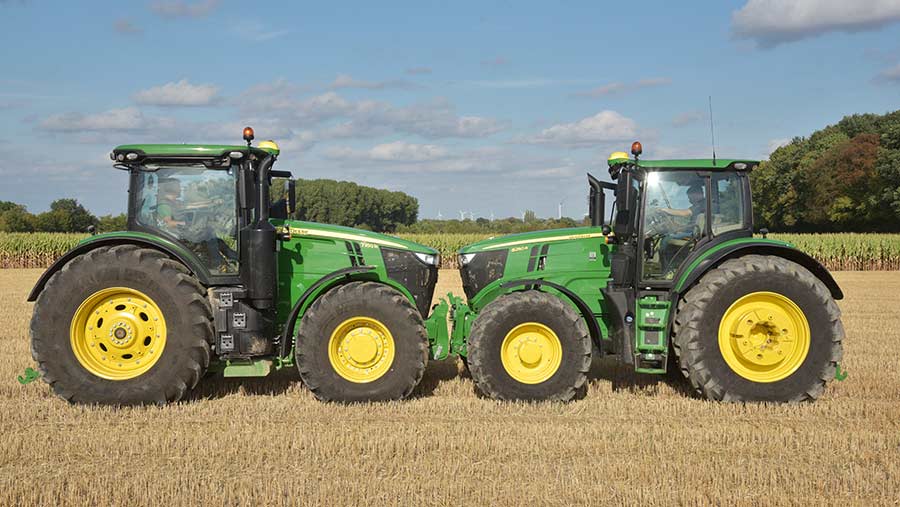 The 250hp tractor market is bulging at the seams, so picking the model that provides the best balance of power, chassis size, transmission and fuel consumption requires careful consideration.

In the case of John Deere, the decision is more difficult as the company offers two tractors that overlap closely – the 6250R and larger-framed, US-built 7250R.

When the 6-series range-topper was introduced at the end of 2016, it plugged a void between the smaller German-made tractors and the tail of its all-American 7-series.

With boosted power touching the heady heights of 300hp, the big 6-series offers serious poke in a relatively small frame and also has the option of what Deere hopes to be a Fendt-slayer – a multi-function programmable joystick (more on that later).

However, peek into the next range and you will see the same horsepower printed on the side of the entry-level 7R.

And with the computing power of a Russian chess master, its e23 powershift gearbox is reckoned to bring CVT-style functionality to the world of proper mechanical drivetrains.

To find out where these two fit, we brought them together in northern Germany for a shoot-out, with the help of our European counterparts and a few techno-boffins from the University of Southern Westphalia.

See the tractors being put through their paces and read the full report below.

How do they differ? 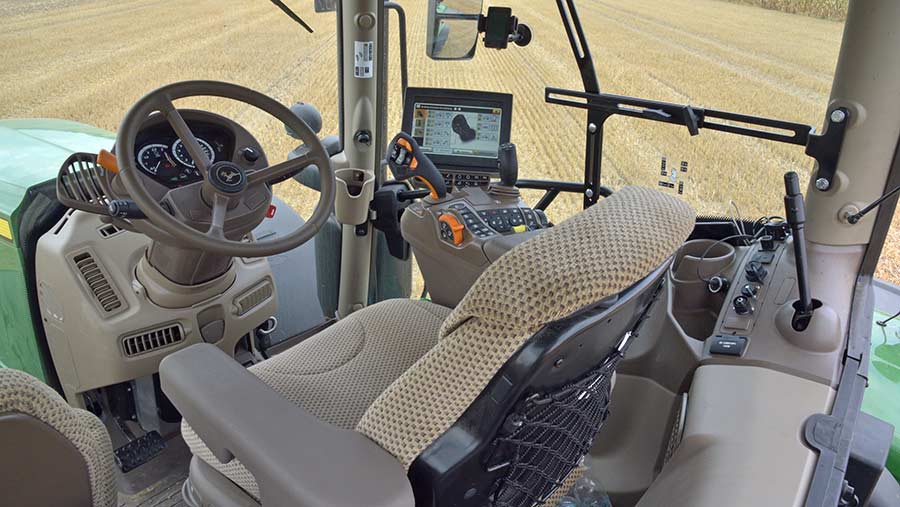 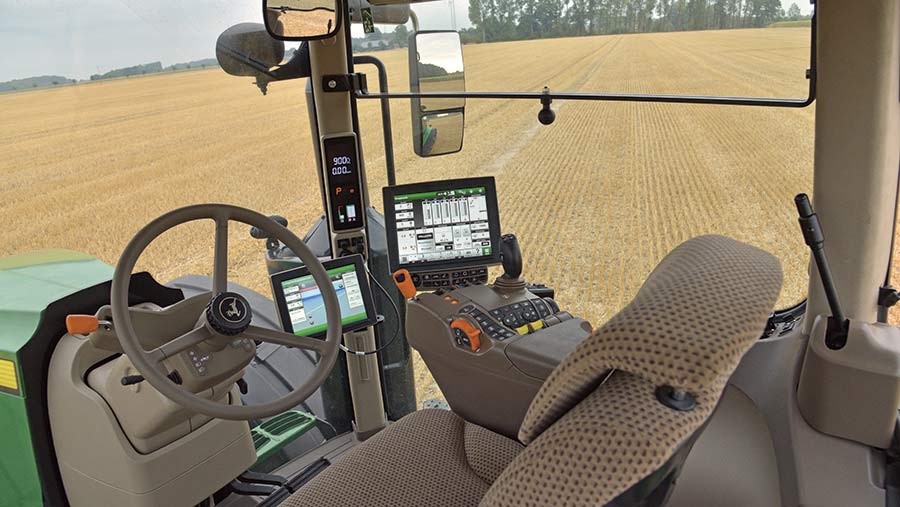 Engine: Both tractors have the same 6.8-litre engine. Peak power for the 6-series reached 252hp (measured at the pto shaft) and torque hit 1,077Nm.

The 7-series’ headline output was 248hp and torque was marginally lower too at 1,050Nm.

Transmission: The 6250R was fitted with a stepless AutoPowr CVT from ZF, which runs to a maximum of 50kph and has a new control setup with active standstill that holds the tractor in place on a slope until a dab of the right boot sets things going.

Jerk-free, it’s a much more biddable beast than previous AutoPowrs.

The 7250R has Deere’s trademark e23 powershift box. Our model was limited to 40kph, but there is the option of a 50kph variant.

There are eight gently graduated gears in the 4-12kph range (15% steps) and an auto-clutch function for the brakes that disengages drive and progressively re-engages once the pedal is lifted.

In manual mode, shifts are made with a stubby orange lever, but select auto and the simple thumbwheel sets the maximum speed, with the gearbox and engine left to work out the best way to reach the target.

“Custom” mode means the operator can bias the tractor more towards draft or pto work, while still relying on auto shifting from the computer. 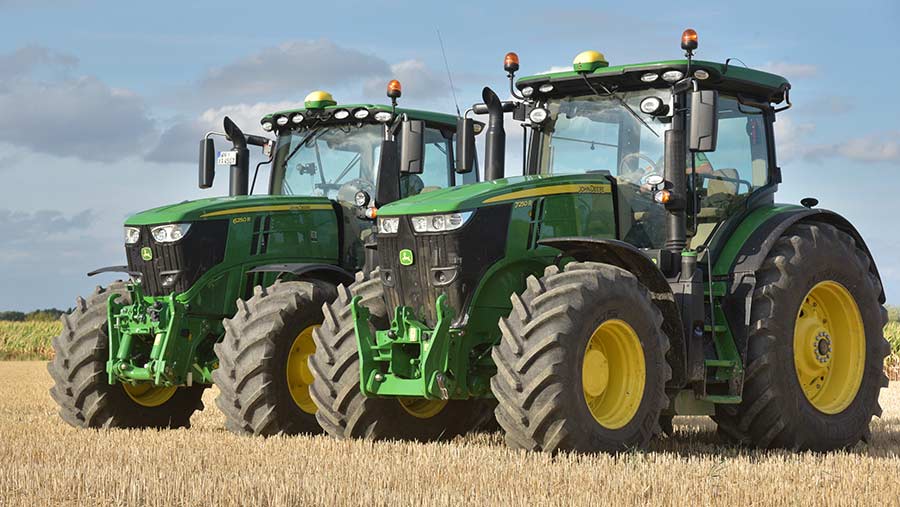 PTO: Both tractors came with 540E, 1000 and 1000E pto speeds, though other options are available. Unfortunately, neither has an auto pto function outside of Deere’s somewhat complicated iTec headland management system. However, both do have a useful pto speed limit function.

Linkage and hydraulics: The 6250R comes with Cat 3 link arms, will lift 6.9t and serves up hydraulic oil at a rate of 160 litres/min.

Its bigger brother has the option of Cat 3 or Cat 4 lifts 6.8t (though Deere offers a 7.7t lift option) and 223-litre/min pump, although in standard spec it’s usually a 162-litres/min unit.

Weights and measures: The 6-series weighed 9.7t, has a maximum payload of 5.3t and a turning circle of 13.45m. Comparatively, the 7R weighs 11.8t and swings round in a clumsy sounding 16.05m. Wheelbase-wise there is very little difference between the two.

Cab: The 6250R’s cockpit is quieter at maximum power (70dBa versus 72dBa). The German-built machine has a five-post suspended cabin with a four-step climb, while it’s five rungs up to the 7R’s spacious-feeling four-poster.

The latter doesn’t have any suspension (although it is available), but we found its “Active” seat provided a better quality of ride over the 6250R’s standard air armchair and cab damping, and we also preferred its pedal-operated swing-down steering column.

The seat and cab suspension tend to work against each other when bought together, so its advisable to stick with just one of these options. 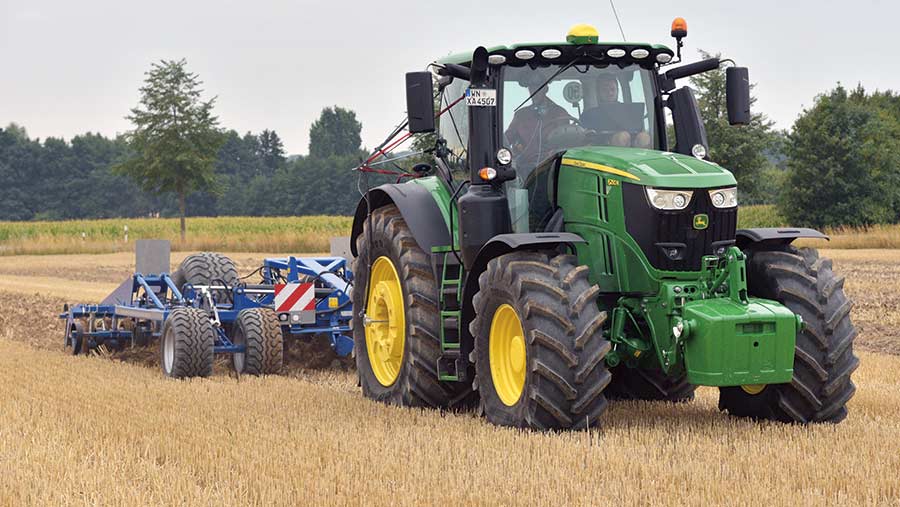 CommandPro: The 6250R is Deere’s first tractor to be equipped with the much-vaunted CommandPro joystick, which can manage all sorts of functions.

e23: Although the 7250R lacks a bells-and-whistles joystick, we didn’t feel that it was handicapped by its absence.

Regular Deere operators will be familiar with the layout of the Command Arm – its stubby black cross lever operates a pair of spool-valves and is topped by five programmable buttons that can be assigned to gearbox, steering, headland or Isobus functions.

With its AutoLearn facility, the iTec headland management system has great potential (learning the ideal sequence of operating steps over a number of runs) and is now standard on all tractors from 6R upwards.

However, editing and building sequences from scratch isn’t intuitive and it is a bit clunky trying to find the right icon at times.

One clever feature is that operators can now add a second screen linked simply by a cable to the first. Much like running twin screens on a computer, pages can then be swiped from one to the other, doing away with the issues of split screens for GPS, implement and tractor functions. 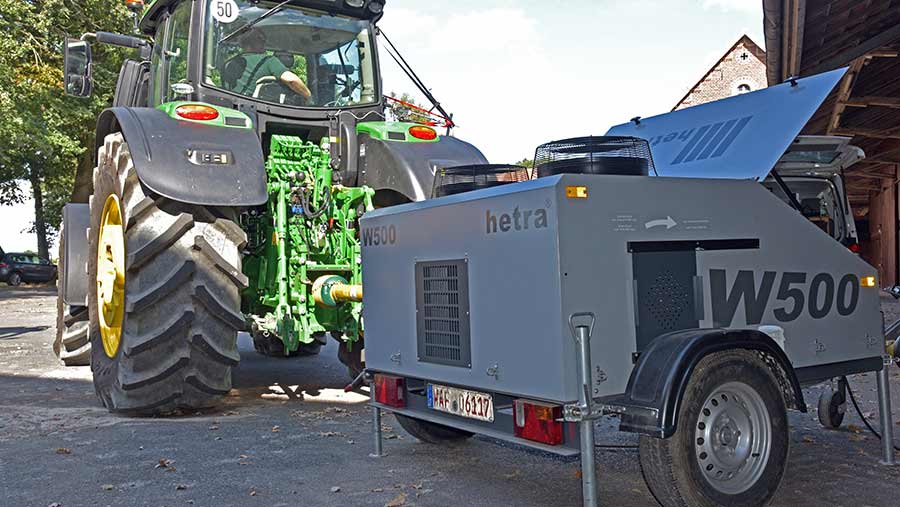 Deere says its custom mode should always be used for field work. This allows the user to tweak settings such as engine droop and gear changes (only for e23, obviously).

Cleverly, the engine also increases speed as soon as the operator hits the spool function to lower the cultivator in, which helps prevent it stalling.

The manual mode on the 7R worked better when hitting harder patches during work as it gave the user control of the situation. In certain cases, we heard the tractor’s engine note drop and the e23 box struggled to adjust quick enough and stalled.

In Custom, the gearbox allows rpm to drop depending on load and sometimes this doesn’t leave enough reserve in the back pocket to pull it back out when you hit a hard patch, although Deere maintains that if correctly set up, this would seldom happen.

We found the joystick on the 6R unnecessary when using implements that don’t have Isobus functions. Assignable buttons are ideal for things such as boom raise and lower or tilt on sprayers, but for a cultivator, standard spools work just fine.

That said, it’s not a hardship to alter settings in the screen accessed via a hotkey on the bottom bank of buttons.

To see how the two performed in the field, we hooked up a 4.6m Kockerling Vector cultivator and attacked some dry, sandy loams at different depths and with varying quantities of ballast to find out the best balance for both tractors.

We measured wheel slip and draft pull via a clever strain gauge integrated into the implement drawbar. On top of that, wheel rotations were recorded against GPS speed to give a true picture of performance.

The ballast options we had available for the 6R were a 1,150kg front weight and four 250kg wheel weights, plus two adapter plates at 50kg each. This all took more than 40 minutes to assemble.

The 7R was equipped with Laforge’s lazy-boy EZ-ballast – a 1,700kg block hoisted under the belly of the tractor by a hydraulic ram that takes less than two minutes to connect. JD has only sold one into the UK and it costs roughly £11,000 extra.

In the unballasted test runs, both tractors dragged the cultivator 10-12cm deep at a speed of 13kph. Here the 6R used 9 litres/ha, while the 7R delivered stats of 8.7 litres/ha.

Then, with all the extra heavy metal in place, we went deeper and slower – 18-20cm at about 8kph. The results were 14.4 litres/ha for the 6R, while the 7R used slightly less at 14 litres/ha.

With its Autopower CVT box, we found the lighter 6R was marginally less efficient than the 7R’s mechanical e23 powershift. The extra 2t on the 7250R frame meant it transferred power more efficiently and it was able to save fuel in the process.

To find out which gearbox is king on the road, we set out a 50km test route taking in smaller B-roads, as well as faster dual carriageways with some long, slow hill climbs.

We completed the route three times, once with the tractor flying solo and twice towing a 24t slurry tanker. The gross train weight with the tanker for the 50kph 6250R came up to 33.8t, while the 40kph 7250R sat at 36t.

With the trailer in tow, the 7R’s gearbox can’t compete with the efficiency of the CVT. Its higher weight was partly to blame for diesel consumption hitting a whopping 67.3 litres/100km – considerably higher than the 6250’s 56.6 litres/100km.

JD say this isn’t unsurprising, not least due to the weight difference, but also a 50kph transmission has a longer top gear, so once at the peak, the engine is at 200rpm or so in order to keep it there.

In contrast, a 40kph doesn’t have the extended ratio, so is sitting near the top end of the rev range, drinking more fuel and going 10kph slower.

The 6250R is probably as close as it gets to a true one-machine-fits-all tractor in green and yellow colours and can probably go head-to-head with the Fendt 828 as a true all-rounder.

Ballasted correctly, it gets pretty close to matching the 2t-heavier 7250R in the field, though it does fall a little short when traction starts to become an issue.

Being lighter is a major advantage on the road – the 7R burns 14% more diesel and, when hooked up to a 24t tanker (which we appreciate is illegal and pretty unusual for the UK) the difference stretches to more like 20%.

We were surprised that there wasn’t more of an efficiency benefit to be had from the 7R’s all-mechanical e23 powershift driveline, which requires more operator input than the set-and-forget CVT.

Despite working well in auto mode on the road, it can’t react quick enough to heavy fieldwork, so it best flicked to manual mode.

Plus points for the 7R include a more comfortable ride (despite lacking cab suspension) and the standard Deere armrest, which is laid out well and packed with enough programmable buttons to satisfy most operators. The fancy joystick on the 6-series is good, but not vital.

Our view? We’d opt for the Big 6 for anything other than pure field work. If it’s a straightforward 250hp cultivations tug you’re after, then go for the 7250R.