Farmers buying a tractor with more than 500hp on tap have traditionally had to settle for a hulking great machine that will have its cylinders firing for only four months of the year.

But when Fendt pulled the wraps off its 1000-series back in the summer of 2014, it reckoned it had come up with a high-horsepower draft tractor that could happily be used all year round.

The reason for the Germans’ confidence is that they had managed, for the first time, to shoehorn a 500hp engine into a conventional tractor layout.

That means it has large wheels at the back, small(er) ones at the front and a steering front axle.

Up until that point, this sort of power could be found only in North American artic-steer bruisers, twin-track crawlers and Claas’s four-wheel-steer Xerion, all of which look a little clumsy in anything other than a 50-acre field.

Don’t be mistaken that the Fendt is a compact tractor, though. To give you a rough idea of its stature, the front 710/65 R38 tyres would look chunky on the back of a typical 160hp tractor, and the rears are custom-made 46in monsters.

Also, when you spec the optional 900mm rear tyres it’s a midge’s member under the 3m width limit for driving on the road without an escort.

So where does it fit in? With just over 500hp on offer, it still can’t match the biggest Quadtracs and Challengers for out-and-out power.

So if you’ve got a 12m drill or a 9m Vaderstad Topdown, you will probably be looking elsewhere.

But for farmers running 8m kit, or those getting into lower-disturbance drilling, Fendt reckons it should fit the bill nicely.

It can also pile on or shed the pounds faster than a Hollywood celebrity. In peak pig-out mode – with its front block and wheel weights attached – it will tip the scales at 21t.

This should give it half a chance of putting that 500hp and 2,400Nm of torque to the ground.

But shed the ballast and it slims down to a shade under 15t.

This is still very heavy, but it means it will tread a good bit more lightly than its counterparts, particularly for lower-draft jobs and top work.

It also has a top speed of 60kph and a pickup hitch so it can do haulage work if required, although it will frequently find itself perilously close to maximum gross train weights.

This all sounds impressive on paper, but to find out what it’s really like we headed north of the Lincolnshire Wolds, where the UK’s sole 1050 was working with a 6.6m set of Great Plains/Simba 2B discs teamed to a 6.6m Cultipress.

Once you’ve shinned up the ladder to get into the cab it’s easy to forget you’re in such a big, powerful machine.

The 1050’s proportions are nearly identical to any other conventional tractor, so when you stick it in the middle of a massive field with no other points of reference it actually seems quite normal. 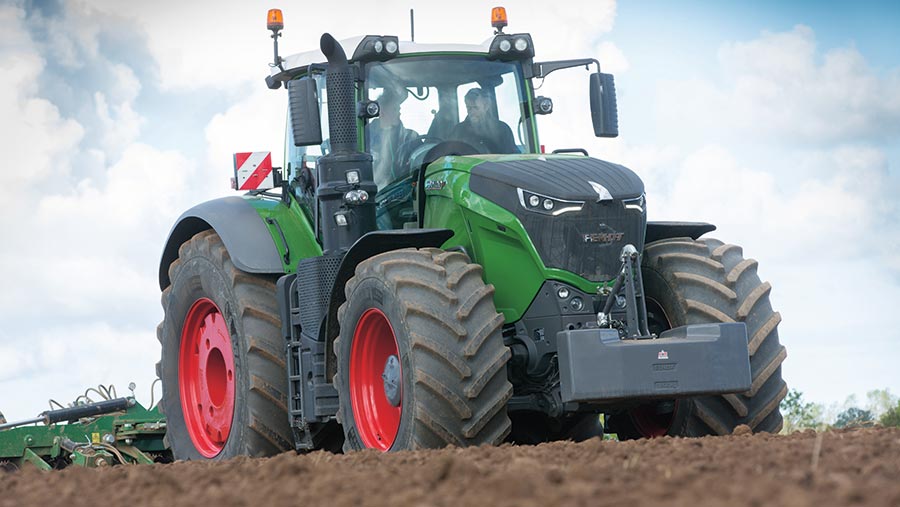 Controls are also pretty much the same as any other Fendt from the 300-series upwards, so anyone who is familiar with the German maker’s way of doing things will be able to hop on and drive it.

It’s also surprisingly manoeuvrable and has a considerably tighter turning circle than we expected. This is particularly impressive given the lack of clearance between the front wheels and the ridiculously wide bonnet.

Power is clearly plentiful, but the fact that we were pulling the 6.6m Simba rig through previously worked ground meant we didn’t get to see it operating anywhere near its limit.

However, in this loose ground we noticed that wheel slip was at times getting close to 25%, so we would still question exactly how well it can transfer its 500hp to terra firma when the going gets really tough.

Those that like the bark and raw grunt of an old-school powershift might also be a shade disappointed with the 1050’s sedate approach to putting down the power.

The 12.4-litre MAN block is tuned to deliver its peak torque between 1,100 and 1,500rpm and when you turn on the TMS (Tractor Management System) it will do its best to reach your target speed within that range.

This can make it feel like it’s chugging along and those that aren’t used to this might think it’s struggling.

However, once you realise that you don’t need high-revs to get the power, it makes the job seem a lot less frantic and creates a pleasant hush in the cabin.

Has it got the same transmission as a 939?

In a word, no. Unlike most other Fendt Vario gearboxes, the version in the 1000-series has only one range.

The way power is delivered to the front axle is also different. Unlike the transmission in the 939 (which uses a drop box off the main gearbox), the 1000-series drives the front axle directly and has separate hydraulic motors for the front and rear.

As well as making the driveline more efficient, this removes the need for a four-wheel drive switch. Instead, the tractor senses where the torque is required and sends it there automatically by adjusting the electronic four-wheel-drive clutch.

How complicated is it?

Fendt tractors are always at the upper end when it comes to technical prowess and the 1000-series has upped the ante once again. 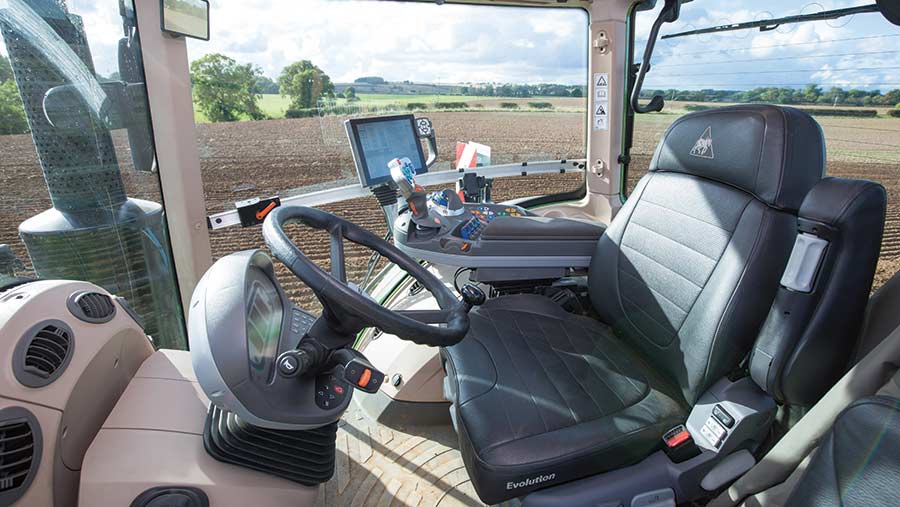 As well as its techy new transmission, the tractor comes with a new feature called Grip Assistant.

This works with the built-in Vario Grip central tyre inflation system to make sure the tyres are always running at the correct pressure for the job in hand.

In the terminal, the driver selects the task being carried out, the coupling type, the tractor’s tyre sizes and the desired speed of travel, and it will automatically work out the ideal tyre pressures.

Once you have confirmed that you are happy with the suggestion, it will make the changes, too.

Now that testing of the pre-production models is complete, Fendt has started to make full-production models. A total of 10 machines are set to land on UK soils before the end of the year, but apparently they have all been snapped up already.

Some are going straight to work with large contract-farming businesses and the rest will be joining dealers’ demo fleets.

So if you are hoping to get your mitts on one, it will probably be early 2017 before you can.

However, once production gets up to full swing Fendt is planning to sell between 20 and 50 machines a year.

If it manages to achieve its goal, it will further bolster Agco’s market share of 220hp-plus tractors, which already sits at a healthy 35-40%.

There’s no doubt the 1000-series will ruffle a few feathers in the high-horsepower tractor camp.

It is relatively manoeuvrable and versatile compared with the competition and the fact it can shed a lot of its bulk means it can genuinely be used as more than just a tillage tractor.

But it’s going to need a fairly specific customer to make the most of its power and complexity all year round and justify the additional outlay over simpler 500hp tugs.

We also still don’t know how it will put down its power compared with an equal-wheeled artic or crawler. But anyone who is interested in buying one will no doubt get to test it out thoroughly on their farm before committing to parting with the cash.

However, all these tractors will be sold on a finance deal with an eight-year warranty, so affordability will come down to whether you can give it enough work to justify the monthly outlay.

For those looking to fork out a little less cash, there will be lower-powered versions of the 1000-series, starting at 396hp. However, a 939 can deliver this sort of power in a more compact package so they are unlikely to be a popular option.