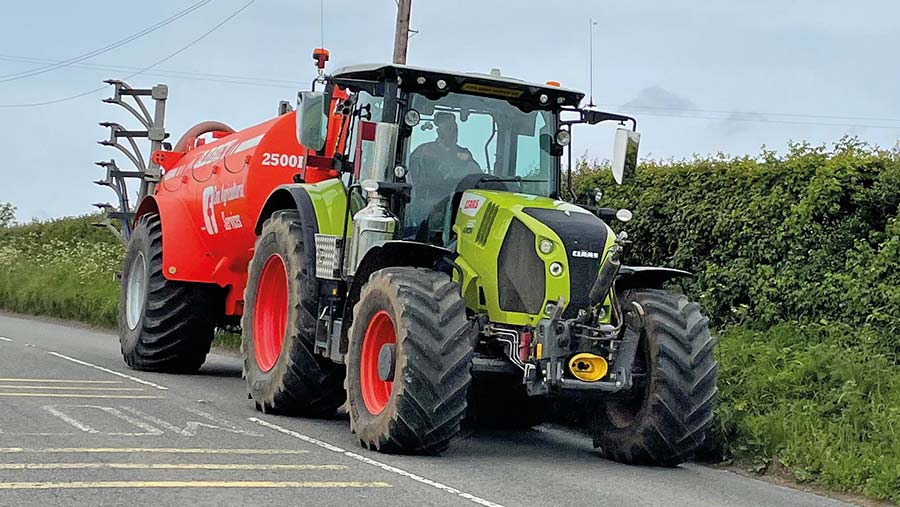 Drive a tractor on the road for any length of time and you are bound to see some form of reckless manoeuvre from an impatient motorist.

Most of the time, these risk-takers get away with their rash behaviour and feel emboldened to do it again. However, if they have been caught on a dashcam, they could find themselves in court with a series of points added to their licence.

Plus, if they do cause an accident, this footage can be used to prove their wrongdoing and clear other innocent road users.

For farmers and contractors that spend a lot of time on busy roads, a dashcam is a worthwhile investment. And with decent-quality models available for £100-£150, it’s an added insurance policy that doesn’t cost the earth.

To help find out what they are all about, we have enlisted the help of Yorkshire-based specialist Will Jackson, of Jackson Vehicle Solutions, who has been fitting dashcams and vehicle CCTV systems for almost a decade.

What are the benefits of a dashcam?

The key thing about having a dashcam is that it provides proof of what happened if you’re involved in an accident, or if someone damages your vehicle or equipment.

They also allow you to submit footage of dangerous driving to the police, which could lead to the perpetrator being prosecuted for their actions.

Most models now record in high-definition and work well at night so they will capture good-quality footage of what’s going on, whatever the conditions.

For farmers who employ staff, dashcam footage can also help protect them if their employee does something wrong.

More expensive cameras come with other useful features, such as speed limit and camera warnings, or the ability to send notifications if the vehicle is tampered with when parked. Some also have the option to automatically alert the police if you have an accident and don’t respond to messages from the system.

Are there any downsides?

If you’re at fault in an incident, the footage from a dashcam won’t work in your favour. However, as you’re the owner of the footage, you can decide if you want to submit it to the police.

Occasionally, those submitting dashcam footage have been prosecuted, but this is rare, and good drivers should have nothing to fear.

If you’re involved in a more serious accident that the police need to investigate, they can seize the vehicle and its dashcam to be used as evidence.

What types of dashcam are there?

The most common type of dashcam has one forward-facing camera that gives a wide-angle view of what’s happening ahead of you.

They cover a lot of eventualities, but don’t help when there’s an incident at the side or rear of the vehicle.

More expensive models will come with the option of an additional rear-facing camera, or a camera on a length of cable that can be positioned at another location of the purchaser’s choosing.

Buying a pair of twin-camera setups also gives the option of creating a 360deg view with four cameras to record all angles – effectively creating a budget vehicle CCTV system.

Some cameras will also come with an internal-facing camera built in, or the option to attach one.

These record what the driver is doing and are mostly used by taxis or fitted in fleet vehicles.

Those that want even more angles covered can look to a vehicle CCTV system, as used on HGVs.

These can have several cameras positioned around the vehicle, all feeding back to a central recorder.

Simpler models will require the SIM card to be removed and slotted into a computer, but most modern dashcams come with a dedicated app that allows you to view and save footage, or transfer it to a computer via wi-fi or Bluetooth.

Some top-spec models will also have a SIM card, allowing footage to be live streamed to a cloud-based platform.

These bring other benefits, such as acting as a mobile internet hotspot that you can connect other devices to.

How do I send footage to the police?

Most police forces encourage road users to submit dashcam footage and will have a simple online platform for uploading the video files, along with a short statement.

The process varies across the country, but a quick search on your local force’s website should reveal what you need to do.

Do they record what I’m saying?

Almost all dashcams have a voice recorder built in, but users can usually disable this in the app.

If you’re dead against voice recording, it’s worth checking this function in the specs before you buy.

Do they show how fast I’m travelling?

Time, date, location and speed stamps are generally placed on the footage. However, most systems will give users the option of disabling this function.

As an aside, minor speeding indiscretions on the part of the person submitting footage are likely to be overlooked by the police. This is because dashcam speedometers aren’t officially calibrated and can’t be proven to be accurate.

More serious speeding might be looked into and it is possible for police to use the footage to work out how fast you are going.

How do I install one?

The best installation method is to hardwire the camera into an ignition-switched live, so that it records whenever the vehicle is running. When doing this, it’s a good idea to add an in-line fuse to protect the device.

A simpler method is to plug into a 12V socket or USB, but this runs the risk of it being unplugged at the time you really need it. Plus, the wires look untidy.

It’s also worth taking some time to work out the best placement for the camera. It should be mounted on the wiped portion of the screen and be positioned so that it gives a good field of view.

Most attach with a sticky pad, but a few have suction mounts. Some makers also offer magnetic attachment from the window bracket so that it’s easy to remove the unit.

When do they record?

Cameras can be set to record in different ways, but it makes most sense to have them recording whenever the ignition is switched on.

This creates a large amount of footage to sift through but, cleverly, most models have an on-board G-sensor that will sense a crash and save this footage, along with the 10-20sec before and after the incident, in a separate file.

The sensitivity of the sensor can be adjusted, so that it won’t trigger every time a tractor bounces down a rough track.

Some models will also have a manual button to trigger the same recording.

Built-in super capacitors or batteries allow some cameras to record footage for a set time after the vehicle has been turned off.

How much footage can they save?

This varies according to the recording quality of the camera and the size of the memory card. However, most will come with a card that can store at least a day’s worth of footage.

This gives the user plenty of time to save videos after an incident, before the files are overwritten. Some cameras will have a lock button that can be pressed to prevent precious footage from being wiped.

There is a huge range of dashcam models on offer from less than £50 to £500-plus. Whichever you choose, it is worth sifting through the specs to make sure you have all the features you need.

Upping the budget usually means you get sharper image quality, image stabilisation to take out wobbles, and add-ons such as cloud storage and Alexa integration.

Below, we’ve picked out a couple of examples from popular manufacturers. 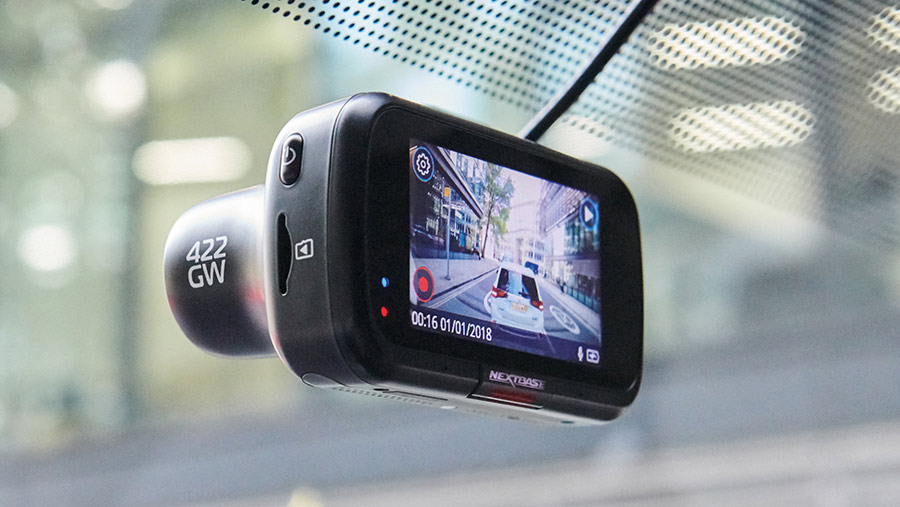 UK dashcam brand Nextbase offers models to suit most budgets, from the entry-level 122 to the flagship 622GW with 4K HD video and What-3-Words integration.

The 422GW is a popular mid-spec model with 1,440p high-res video, a 2.5in touchscreen, and wi-fi connection to the firm’s mobile app for viewing and downloading footage, or sending it to someone else.

There is also Alexa voice control and an SOS function that will automatically contact the police if you’re involved in a serious accident. 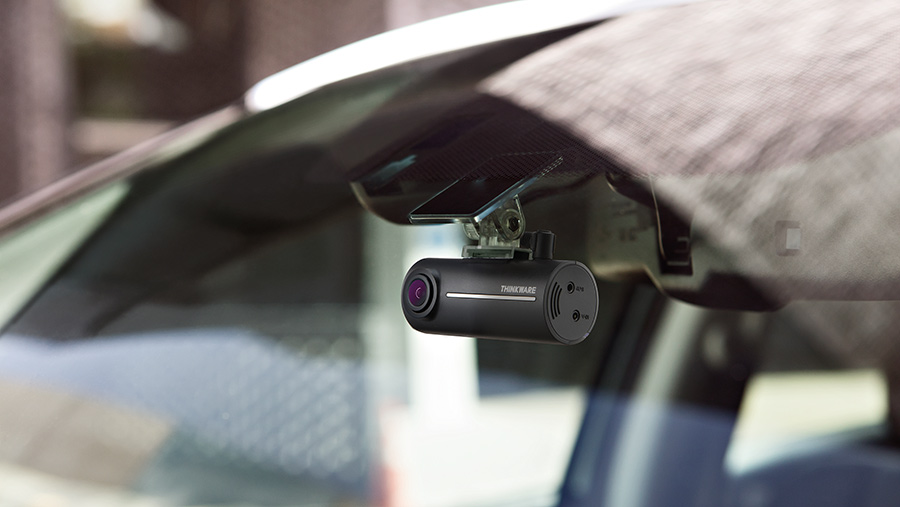 The F100 from Thinkware is a simple device with a Sony camera on board that produces 1080p full HD video from its 135deg lens.

It is fitted with a G-sensor to detect accidents and save the footage in a separate file, plus a motion detector that triggers filming if the vehicle is tampered with when parked.

Additional features include rear-facing and external cameras, plus a speed-limit and speed-camera warning function.

It doesn’t have a built-in GPS receiver for recording your location, but a separate unit can be plugged in. There is also no wi-fi capability, but buyers can get this facility by upgrading to the F200.

What the police say

The police are big fans of dashcams as they provide accurate accounts of incidents that can be used to prosecute dangerous drivers.

PC Dan Cox, road safety officer for Avon and Somerset Police, says they are “game changing” for road safety in the UK.

He reports an explosion in the amount of footage being received from dashcam owners in his area, which the force has been able to use to take offenders to court.

About 50% of the footage submitted leads to a prosecution and 40% results in a strongly worded warning letter being sent out, leaving just 10% where no further action is taken.

He is encouraging farmers and contractors to fit cameras in their tractors and submit footage of traffic offences that they capture.

“We want to stop unnecessary and dangerous overtaking, and dashcams help us get to the heart of the problem,” he says.

“Once drivers have been warned or prosecuted for their actions, we see a marked improvement in the way they drive.”

Like most forces, Avon and Somerset Police have a simple online page where footage can be uploaded along with a short statement.

Concerned about the dangerous driving from other motorists when taking their tractors on the road, Somerset contractors Michael and Rob Cox decided to invest in dashcams. 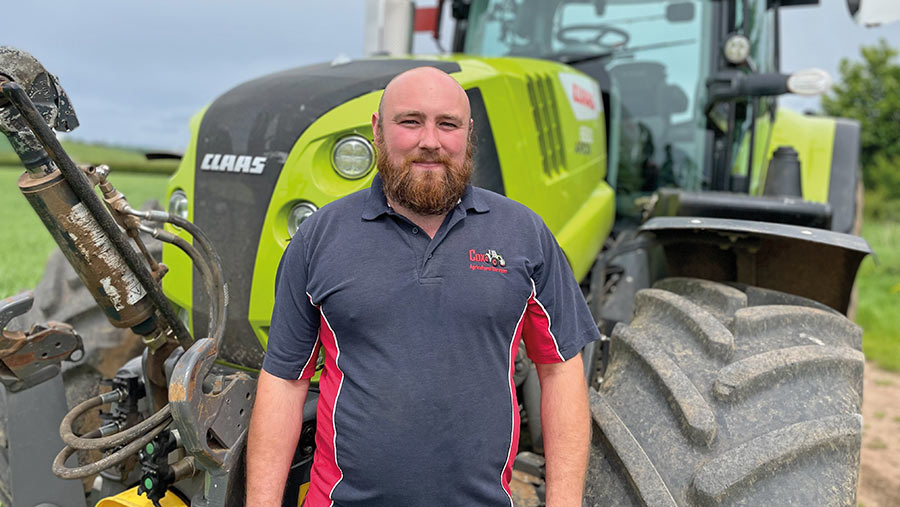 After shopping around, they settled on Roadhawk DC-3 cameras, which were approved by their insurance company.

These film 1080p full HD, use 64GB SD cards that can store a couple of days’ worth of footage and have a G-force sensor that starts the camera rolling when a bump is detected.

This feature has adjustable sensitivity, which they’ve turned down to prevent it triggering as the tractor bounces around.

To make sure the cameras are always working, the pair decided to have them hard-wired into their Class Arion 650 and 550 tractors. 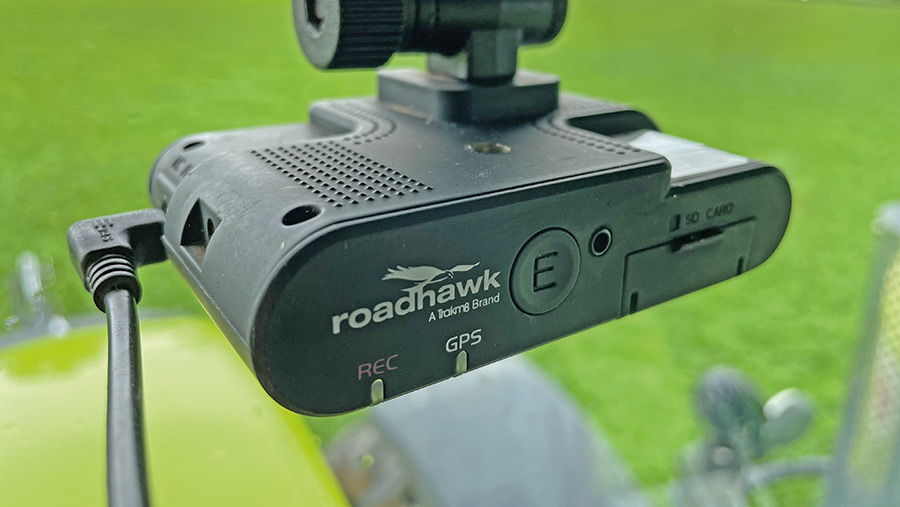 The Roadhawk cameras don’t have wi-fi or Bluetooth for downloading footage, so when they have footage they want to save, they take out the cards and upload it to a computer.

Over the years they have captured a huge catalogue of appalling driving, including dangerous overtaking manoeuvres, vehicles pulling out in front of tractors and cutting them up when turning into fields.

They have not been involved in any serious accidents, but the footage did help them get payment for a replacement mirror from a haulage company whose driver knocked it off.