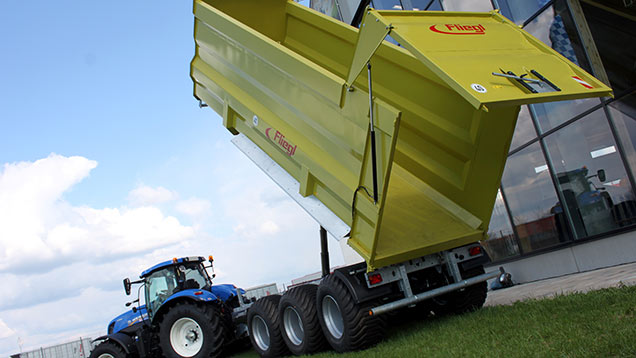 German trailer maker Fliegl has announced it is to establish a new UK headquarters in Boston, Lincolnshire.

The firm, which is best known in the UK for selling muck and slurry equipment and top-end push-off trailers, will also use the site to base its design and assembly operation as it seeks to gain a share of the conventional monocoque tipper market here.

Until now, the firm has backed a small group of UK dealers via direct support from its farm equipment factory in Germany.

But Fliegl now plans to expand its dealer numbers, and open the new premises to serve not only as a service and parts base, but also become a product research, component manufacturing and assembly operation.

“With UK weight limits having increased and tractors travelling further and faster, we believe now is the right time to enter the market with a product not only designed with UK farmers in mind, but that also makes extensive use of aluminium to maximise lightness, strength and payload,” says commercial director Jose Viedma.

See also: What’s In Your Shed? We visit a Cambridgeshire arable farmer

“It costs at least €2,000 [£1,400] to send a tipping trailer to the UK, and our new operation will help overcome this by combining components from Germany with parts made on the premises.”

To begin with, Fliegl plans to focus on high-capacity conventional monocoque tipping trailers up to 16t, said Mr Viedma.

“We recognise that European trailer design is often too tall and too short for many UK operations, and these trailers will be designed with UK farmers in mind.

“Along with components from our German factories, they will make use of materials from local suppliers.

“But further on we will also be looking to manufacture components for and assemble manure spreaders at the Boston facility, as well as woodchip machinery, for which we see a strong future as the biomass energy sector grows.”