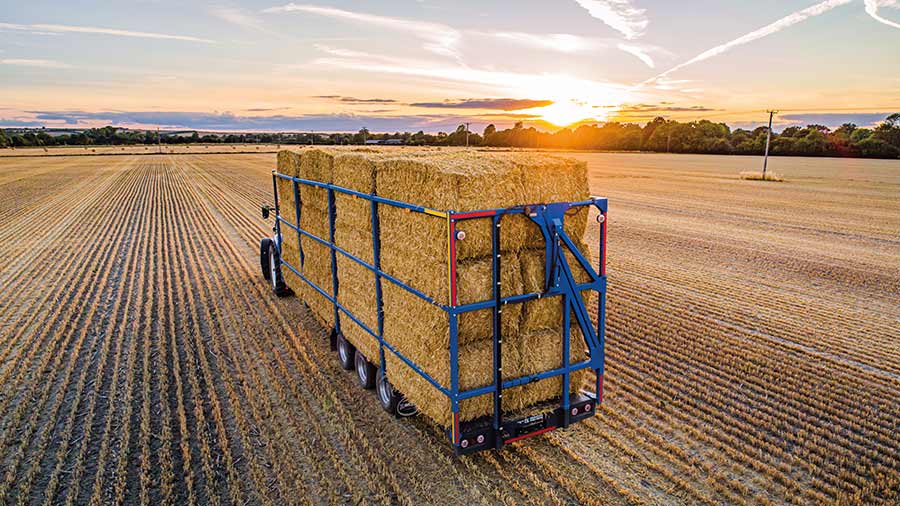 The new generation of bale-hauling trailers makes the job far more easy and quicker than it used to be when strapping and unstrapping a big consignment of bales.

More importantly, operators are not required to work close to unsecured bales, either in the field or back at the yard, nor is it possible to accidentally push a bale or two off the far side of the trailer when loading or unloading.

Operators are less likely to be stopped in transit over concerns about an improperly secured load, too.

We look at some of the options for updating your bale trailer.

In the majority of cases, manufacturers have opted for a mechanism that lifts and lowers full-length frames on parallel linkage arms, with pressure-open check valves ensuring the frames can’t come down from their raised position unexpectedly.

The Birnie Bale Safe from SIB Services and the SlurryKat design have a telescopic side frame extension to hold three layers, while Stewart opts for a third rail that can pivot upwards from the side frame to achieve the same result.

In all cases, being able to operate each bale-securing frame independently means trailers can be filled and emptied from either the left or the right.

As an alternative approach, the Fliegl and PK Sales formats feature an all-encompassing bale cage, with one side opening upwards.

This eliminates the risk of the loading vehicle hitting the frame on those that lower to the ground.

Marshall Trailers opts for something a bit different – a net made from webbing straps lowered for loading and off-loading and raised for transport using single hydraulic arms front and back for each side of the trailer.

Apart from avoiding potential damage from a loader tractor or telehandler (since the “net” folds in on itself), this solution is reckoned to offer a – literally – more flexible solution for loads other than bales.

Hydraulically operated load-securing frames can be specced on all eight models of Bailey Bale and Pallet flatbed trailers, which range from 5.7m to 12m long and run on single, tandem or triple axles.

An optional sprung drawbar is available on all models except the smallest to complement the sprung axles.

The 2.5m-wide beds are fitted with 4.5mm chequer plate flooring and a choice of three hydraulically operated bale-securing frame configurations.

It has a single each side for load heights of 1.7m or 2.38m, and a double-frame version enabling big, rectangular bales to be stacked three high or 3.6m overall. 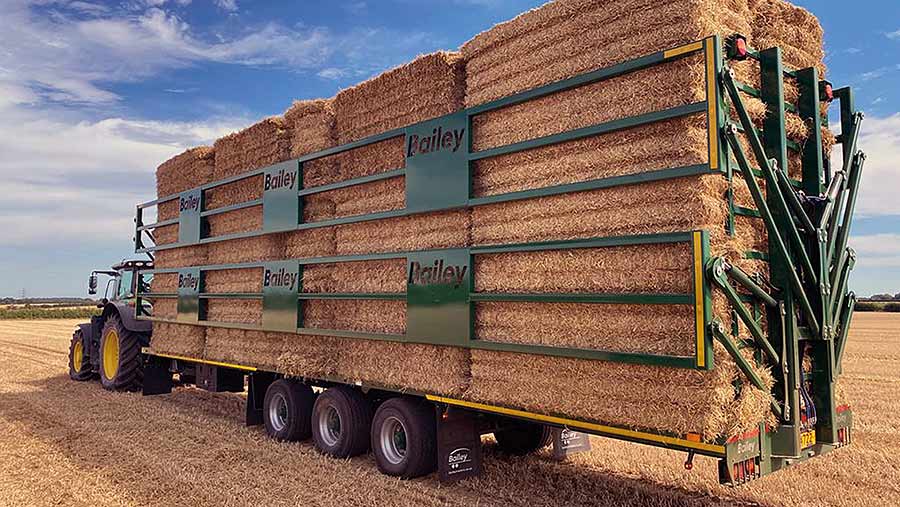 The triple-bar frames are mounted on parallel linkages with one hydraulic cylinder at each end; each side can be lowered and raised separately with a single button press, so operators can load from either side.

A lock-out valve in the hydraulic circuits keeps the side frames in place for transport.

All are equipped with parabolic leaf spring suspension and an air-braking system as standard, and the tandem-axle model can have a sprung drawbar.

The 2.48m-wide deck in each case is constructed from 3.5mm galvanised steel plate, as is the bale-securing frame.

This can be fixed on one side, opening on the other, or both opening to give a choice of loading direction. 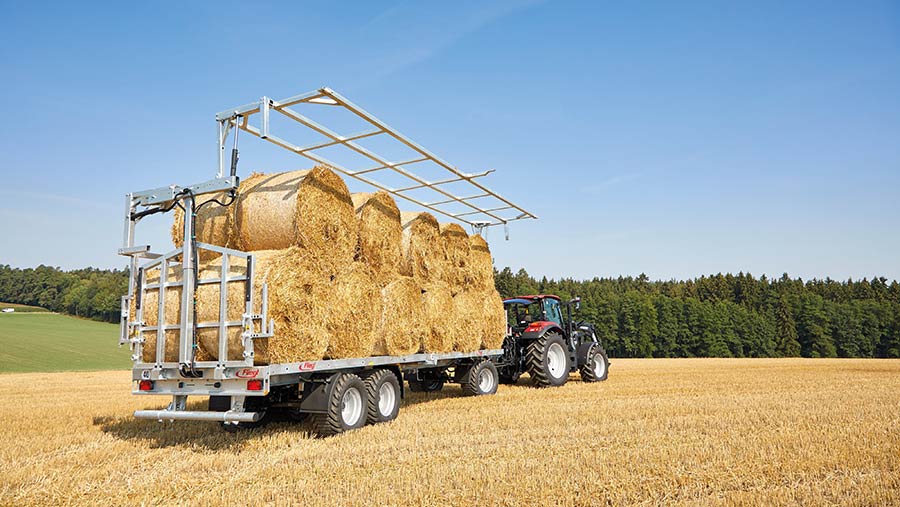 To load, the entire frame structure lifts vertically to clear transport lock slots; the opening side then rotates outwards and upwards around pivots on top of the front and rear supports.

The reverse of this procedure secures the triple-bar frame by lowering it into the end lock slots once more.

A third hydraulic service is used to adjust side frames horizontally in and out for different load widths, with the locking mechanism assemblies positioned manually using pin-and-hole adjustments for the same purpose.

With single-side opening, the trailers are priced ex-factory in Germany at approximately £32,100 for the tandem rigid drawbar, £31,257 for the three-axle turntable model, and £25,666 as a two-axle turntable version.

Hydraulically operated side frames mounted at each end on parallel linkage arms of fixed length are available as an option for 8m and 10m Joskin Wago bale trailers in both semi-mounted and turntable drawbar formats.

Both types are constructed from high-tensile steel, with either an electrostatic two-pack paint finish.

The 2.5m-wide floor is built from chequer plate – or the fully galvanised with the deck formed from smooth plate with V-shaped drainage slots laser-cut into it. 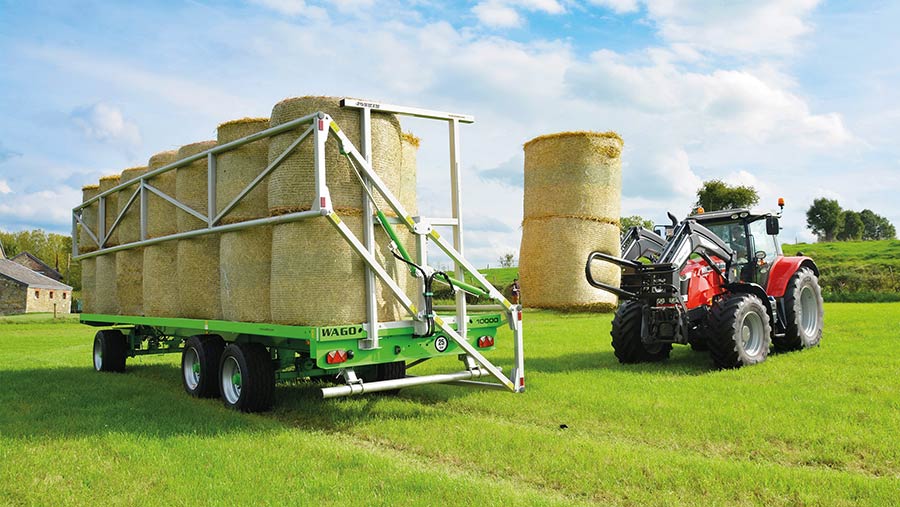 The two-bar bale-securing frames with vertical and diagonal reinforcing sections are operated independently, so the trailer can be loaded from either side.

It has an isolation valve in the hydraulic circuit holding them in place during transport.

The Red Heavy commercial axle flatbed bale trailers produced by Keith Rose Engineering at Huntly, Aberdeenshire, can be equipped with a bale-retaining frame.

The frame comprises a fixed end and one fixed side section, and an opening frame carried on parallel linkage arms front and rear.

Lowered to the ground for loading and then raised into position by two hydraulic cylinders to secure round or square bales, the opening side frame is constructed with box section uprights between two tubular steel horizontal beams running the full length of the trailer bed. 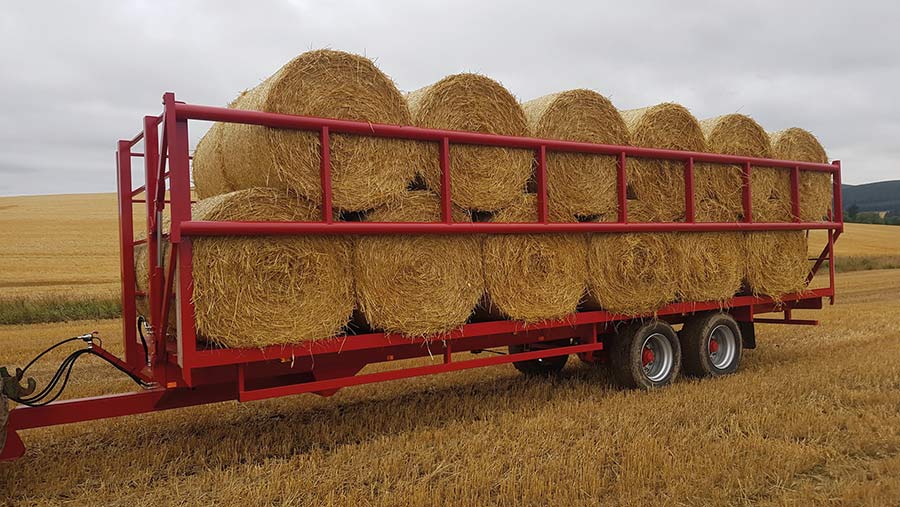 Chequer steel plate is used for the deck on 60x40mm bearers for the 10t-capacity models available in lengths up to 6.85m and with a 2.7m-wide floor.

All run on commercial overspring axles, but otherwise come with a selection of running gear options, including air-actuated brakes.

A different approach to securing bales has been taken for the Easy Secure System from Marshall Trailers.

On each side it features one heavy-duty bar stretching the length of the deck attached via pivots to a straight, tapered arm at each end, raised and lowered by hydraulic cylinders.

To the bar is attached a webbing strap “net” with thicker, closer-spaced horizontal straps in the bottom section to contain the load – whether bales, bulk bags of seed or fertiliser, vegetable boxes or other items. 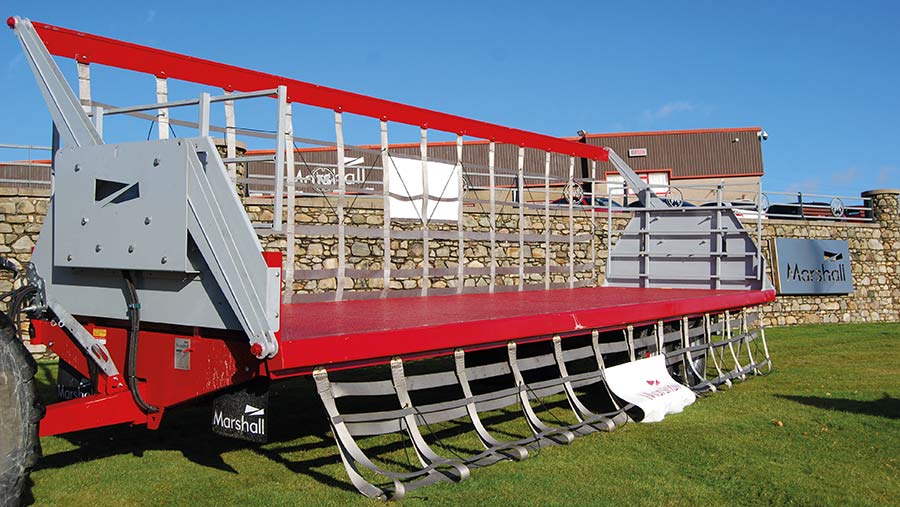 As the beam is lowered, the net folds in on itself to leave the way clear for loading and offloading, which can be carried out from either side as the two mechanisms are operated independently.

Moreover, because of the flexibility of the net, the trailer can be disconnected in the loading/unloading configuration, something that is unlikely to be possible with side frames that lower to the ground.

These run on commercial axles as standard along with parabolic leaf suspension and a sprung drawbar. 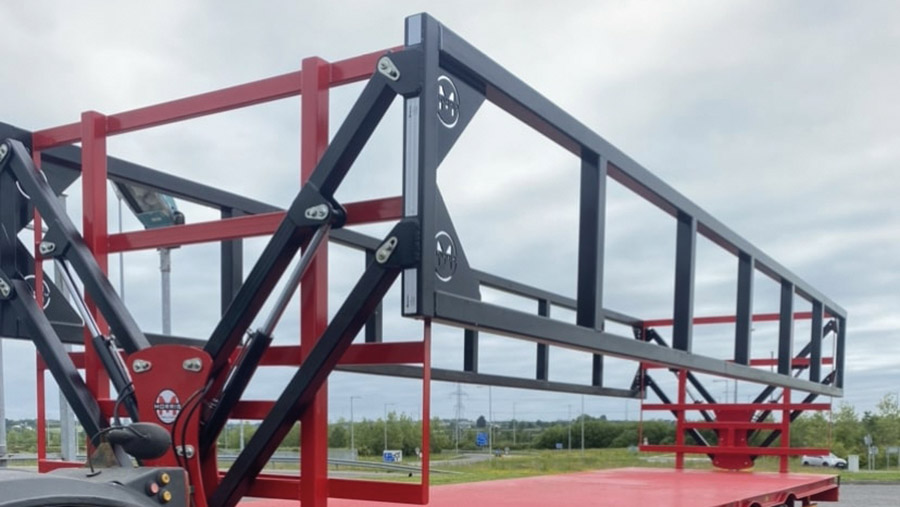 The side frames, which are operated individually for either-side loading are constructed with box-section beams and uprights, with steel plate fillets providing additional strength.

The twin parallel arms that lift and lower the side frames are of fixed length and there are check valves in the hydraulic circuit for safety. Prices start at about £16,000.

The Load & Go bale-securing frame is a bolt-on structure that PK Sales says can be fabricated to fit any bale trailer.

Load & Go, priced from £7,500, comprises fixed front, rear and side sections – plus a centre frame on long versions such as the 10.9m tri-axle model pictured on the previous page – for added strength and stability. 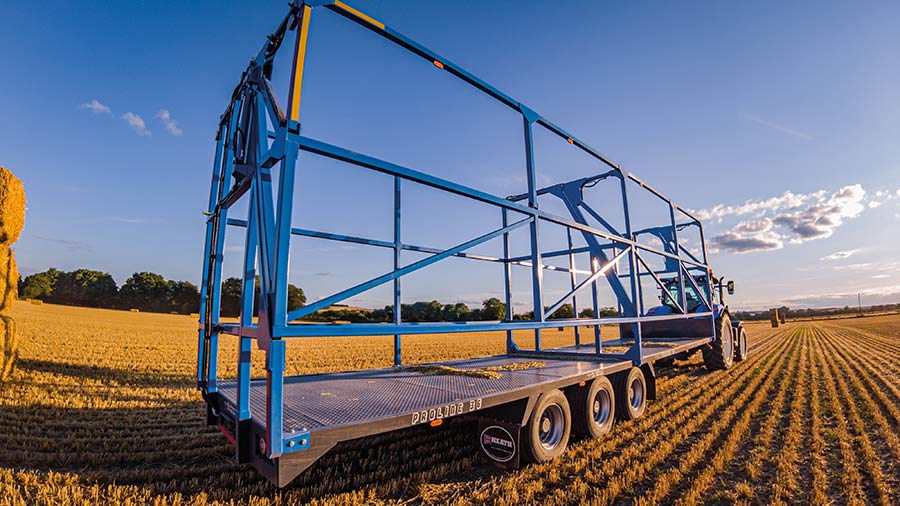 steel with the horizontal rails spaced to suit any bale size. In operation, the opening side unit rotates outwards and upwards around pivots at the top of the front, centre and rear sections to leave a clear approach to the trailer.

Proline bale trailers have 4mm chequer plate for the 2.55m-wide deck, a sprung drawbar and commercial axles with multi-leaf springs.

Twin- and triple-layer Birnie Bale Safe trailers with hydraulically operated load-securing frames are offered by Aberdeenshire-based SIB Services, based on the original design of farmers Stephen and Iain Birnie.

On both models, parallel linkage arms at each end of the trailer raise and lower the load-clamping panels individually, and pilot-operated check valves enable the panels to be locked in the raised position. 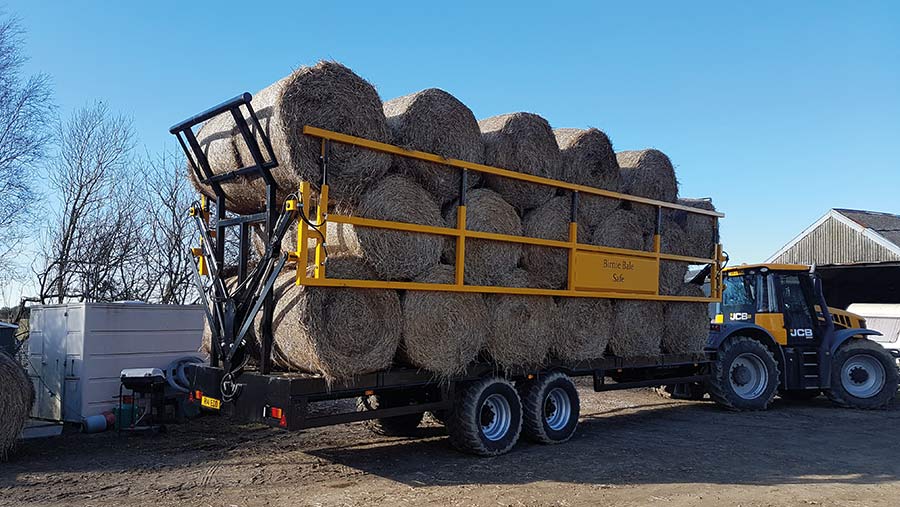 The two-layer model is said to be designed as a lightweight but strong bale trailer, with dirt-shedding measures on the chassis to minimise corrosion.

Side frames are constructed from two lengths of box-section steel, with uprights reinforced by triangular fillets of steel plate, and a smooth finish to the trailer deck is said to make it easier to pull in and clamp a load of bales.

The triple-layer version has two unique features – the top rail of the three-rail side structures can be extended to carry a full load or retracted to reduce overall height; and the entire panel can be inverted to secure loads such as potato boxes, pallets and bulk bags.

Four sizes of 14t capacity bale trailers – 7.3m, 8.5m, 9.1m and 9.7m – are produced by SlurryKat, with side gates and hydraulically operated vertical extensions to secure two or three layers of bales.

The structures are fabricated with galvanised tubular steel rails and box-section uprights, and the box-section parallel lifting and lowering arms are also galvanised.

Independent operation means loading/unloading can be performed on either side of the trailer, with a pressure-release lock valve holding the side frames in place when in the raised transport position. 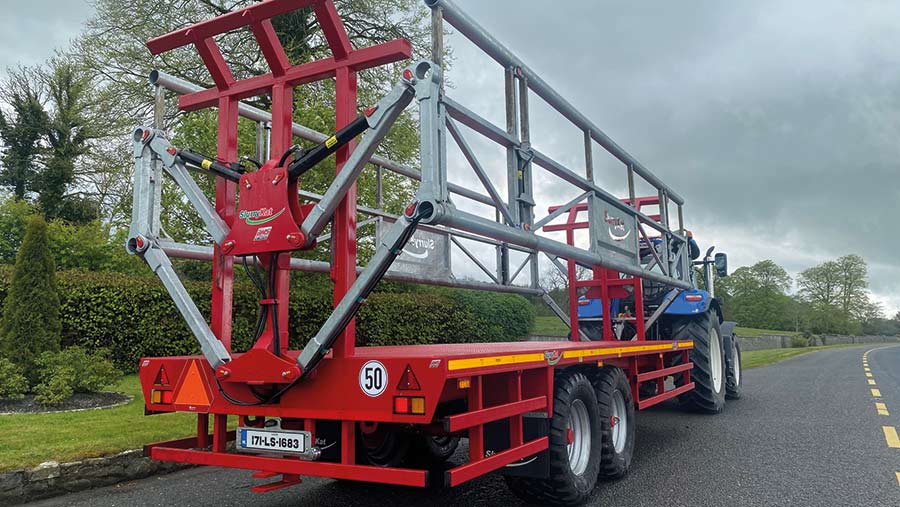 A chequer plate deck has 1.8m-high vertical racks at each end and there is a galvanised storage box beneath, while crash rails are fitted down both sides and across the rear.

Tandem-axle flatbeds with bale-securing side frames are built by Staines Trailers in sizes from 7.3m to 11m, with prices starting at £13,721 for a 7.3m model to base specification. 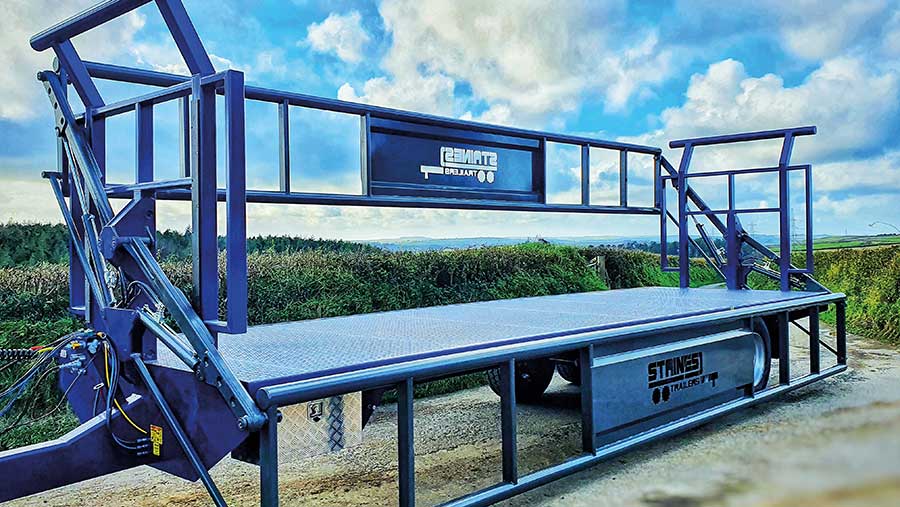 The individually operated side gates are built with two full-length tubular steel rails and uprights, lowered for loading by hydraulic cylinders at both ends of the trailer acting on parallel arms of fixed length.

There are forward- and rearward-canted front and rear bale ladders for extra support.

Based on Stewart’s GX range of 7.9m to 11m flatbed trailers, the BH bale transport models are available in two-layer and three-layer configurations, with either an all-over two-pack flexi-paint finish or with the chassis, drawbar and deck galvanised.

Two sets of parallel linkage arms – one for each side of the trailer – are used for both versions; on the three-layer model, a third tubular steel rail pivots out and upwards from its “parked” position alongside the main bale-securing frame when needed. 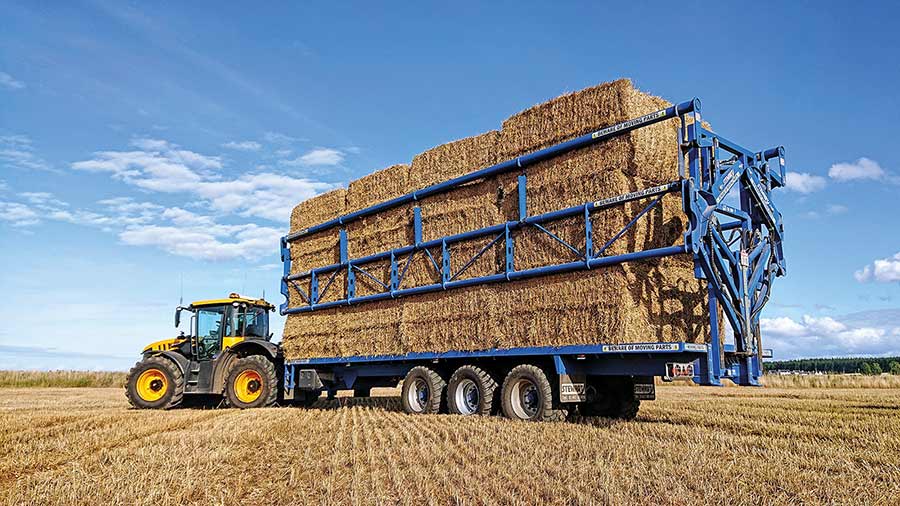 All bale-retaining structures are built with laser-cut plate steel uprights between the full-length steel tube rails, and there are ladder frames front and rear of the chequer plate deck.

While the Stewart GX 18 FT with 18t carrying capacity in 9.7-10.9m sizes has triple high-speed commercial axles, the 15t-capacity GX 15 FT in 7.9-9.7m lengths runs on a tandem-axle set-up, both with four-leaf spring or air suspension.