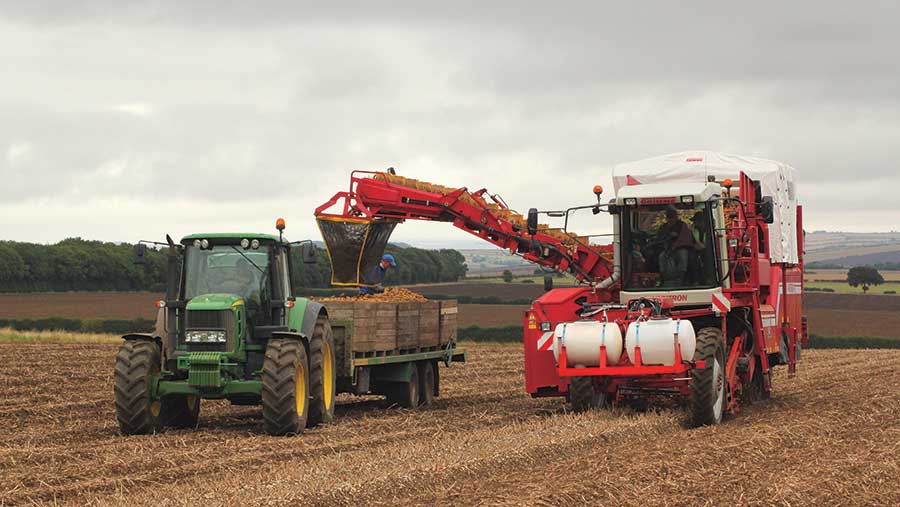 Better soil structure has rightly become a top priority for farmers, and contractors can do their bit to help minimise compaction.

Adam Clarke visited two large-scale operators to see what steps they were taking to tread more gently during the maize and spud harvests.

It’s not just its tweaks to large kit that is minimising Robert Tuckwell Contractors’ footprint.

The firm chops in excess of 1,500ha of forage maize each year on predominantly heavy Bucks clay, so getting the crop off the fields without making a mess requires careful planning before the forager even leaves the yard at Mursley, south-west of Milton Keynes.

Partner (with his father Robert) Daniel Tuckwell says he identifies potential sticky spots that may prove problematic later in the season and drills early-maturing varieties through April in an attempt to bring the harvest forward.

“With maize, it is likely you are going to be working in some adverse conditions, but you can reduce the risk.

“We have just increased drill capacity and ran a 16-row Horsch Maestro for the first time this spring. If you can get the crop in the ground in good time, hopefully we’ll get in earlier in the autumn before conditions deteriorate,” he explains.

The business has invested heavily in machinery in recent years to increase efficiency and that inevitably means bigger kit, so Mr Tuckwell has looked hard into how tyre technology can help minimise soil damage.

From a handful of 12t K-Two Roadeo trailers on Super Singles a few years ago, there is now a fleet of nine 16t haulers and one 18t tri-axle version, four 20t dump trailers with greedy boards and two 50cu m pusher trailers, all running on low ground pressure tyres.

He says the tyres aren’t ideal when clocking up road miles on long-haul jobs because they get hot and absorb sharp objects more readily, but perform very well at reducing deep ruts in the field. 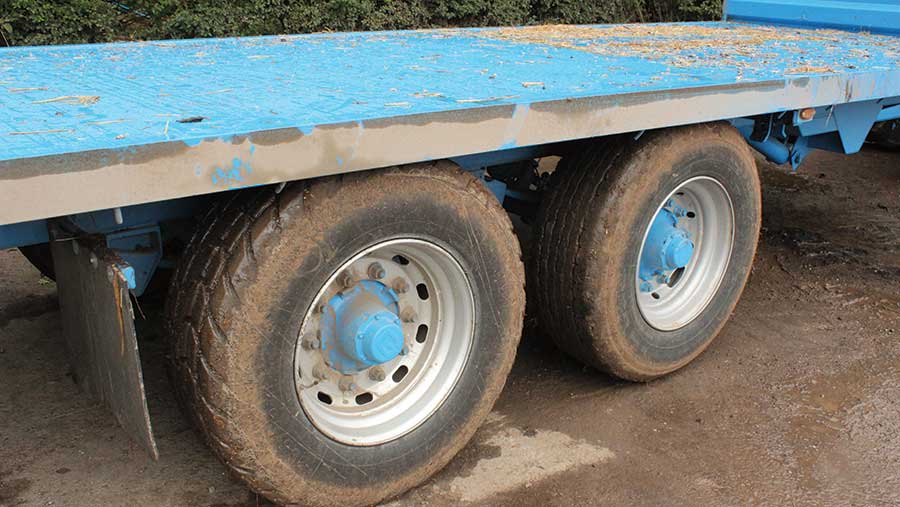 “We are trying out a few, including the new Michelin CargoXbib with easy-clean cleats and the Nokian ELS Radial. The Michelins are more expensive and I don’t think they justify the extra cost,” adds Mr Tuckwell.

Instead, the majority are fitted with BKT Ridemax FL 693 M inflated to 58psi. At £550 each they’re a bit cheaper, but Mr Tuckwell has seen little difference in terms of wear compared with more expensive options.

“We have 68 tyres plus six spares, so it is a big cost that we try to keep down. It is 100% worth it though, as we are able to work in most conditions with minimum impact.”

As well as trailers, tractor boots have also had an overhaul and standard spec 650s have been swapped for Michelin Ultraflex or Trelleborg 1050 710s on the Fendt and Claas workhorses.

Run at 16psi in the back and 12psi in the front depending on load, they set the business back about £3,000 per tractor, but again it’s a price Mr Tuckwell is prepared to pay. 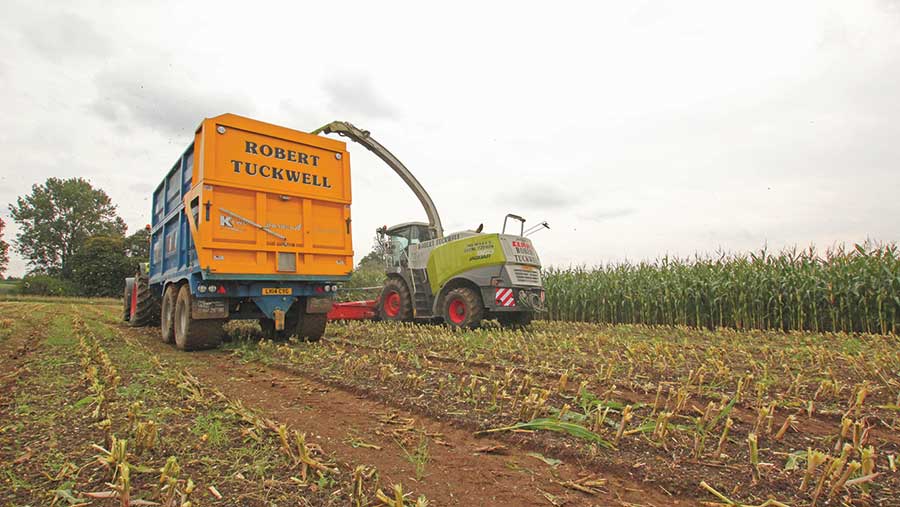 “They have a big footprint to spread weight and run at low pressures on the road and in the field, so there is no inflation or deflation needed when changing between jobs,” he adds.

As well as tyres, the tractors are also slimmed down as much as possible ahead of hitching up a maize trailer to decrease gross weight and reduce axle loads.

Two Jaguar 950 foragers have the useful addition of on-board tyre inflation controlled from the cab, so tyre pressures are dropped from 1.8-2.2bar on the road to a minimum of 1.2bar in the field.

One is equipped with a new 12-row Kemper 390 Plus header this season that tips the scales at about 4t, so easy tyre pressure adjustment is a useful tool to spread the weight exerted on the front tyres with the flick of a switch.

Mr Tuckwell reckons the increased working width of the Kemper will also give the added benefit of reducing trailer traffic – another area he is trying to optimise.

“With no tramlines in maize, I ask my trailer men to spread traffic across the headland if possible, rather than smash one lane to bits and end up with ruts a foot deep.

“There are differing opinions on that, but I believe lighter compaction across a greater area is less damaging and easier to lift out,” he explains.

While compaction can be minimised, it is almost impossible to avoid altogether, so light compaction will be lifted out with a trailed 3m Sumo Trio and more serious damage is tackled with a five-leg Simba Flatliner.

“We’ll try to cultivate in the autumn to get some structure back and reduce erosion if conditions allow. We are also looking into cover crops.

“Where ground hasn’t been touched, the compaction is certainly noticeable in the next maize or wheat crop,” says Mr Tuckwell.

He adds that the business is doing as much as it can to minimise soil structure damage, but is open to looking at new ways to keep both his own and his customers’ soils in good shape.

“We could look at chaser bins on tracks to reduce traffic, but in the region of £250,000, it would be an expensive investment and I’m not sure we would see enough benefit.”

Based at Cowlam, near Driffield, East Yorkshire, contractor Philip Clappison, former Farmers Weekly Contractor of the Year, harvests 1,200ha of potatoes each year and is taking steps to minimise compaction while lifting.

Damage isn’t a huge issue over a large proportion of his crop grown on the Wolds in shallow, free-draining soils, but some of his lifting is on heavier, low-lying ground where soil structure issues can occur. 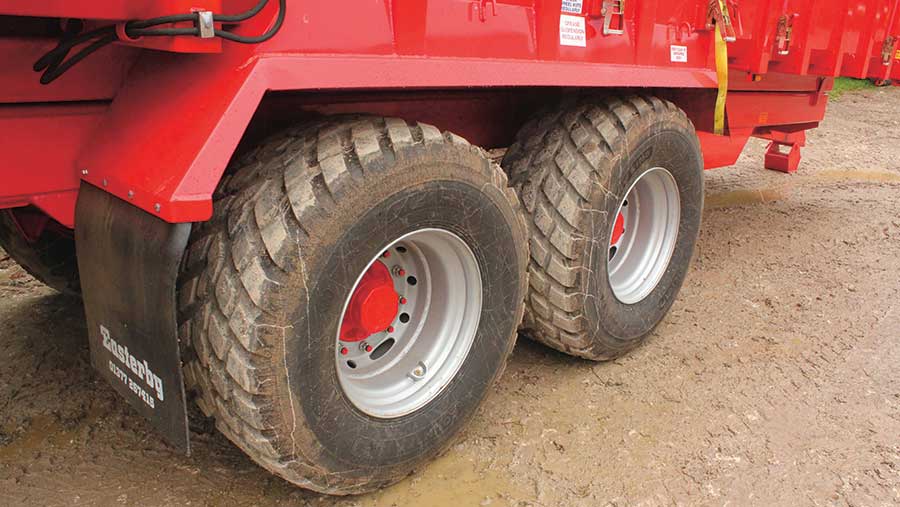 He says new investment in drainage is the most critical factor on the heavier dirt, reducing wet spots and avoiding mess when running heavy machinery through them.

“Near Routh, east of Beverley, a lot was re-drained last year. The wet spots have disappeared where there was previously standing water and crops look much better.

The improvements are solely down to the drains working again.

“We do our best to manage compaction, but if you were too focused on it you wouldn’t get the crop out the ground in some years. Even so, farmers don’t want their land looking like a battlefield when we come out of it,” adds Mr Clappison.

Unfortunately, potato bed preparation, planting and harvesting all require tractors and a proportion of trailers to run in 17in rows, so most of his tractors are fitted with 16in wheels year round and trailers on Super Singles to avoid damaging beds.

“They are as big as they can be and we don’t want our men spending too much time changing wheels, so you have to try and find a balance,” he says.

All tractors have compressors and carry air lines so operators can adjust tyre pressures to suit conditions and Mr Clappison works on the principle of having three cleats on the ground at the rear.

With trailers, the firm is going through a transition period at present, with three 16t Easterby bulk trailers on low ground pressure tyres and some recently acquired Stewart flat-beds for lugging boxes following suit.

“Every machine we change from now, we are looking at switching to lower ground pressure tyres where we can. However, on some of the existing flat-beds the axles just aren’t suitable.”

On trailers where flotations aren’t an option, Mr Clappison has been trying some 405/60 22.5 Super Single Low Riders, which are slightly wider than the standard version, to try and find a happy medium.

Where any soil structure damage needs to be rectified, Mr Clappison brings in a neighbour with a 600hp Quadtrac and 6m Sumo Ripper rigid tine cultivator after harvest if conditions allow.

“We find that is better than a sub-soiler if the ground needs sorting after spuds.”