Tractor and trailer braking performance was in the spotlight again last week (15 November).

“It’s important to achieve a balanced distribution of braking effort from the tractor and trailer combination, with each making an appropriate contribution relative to their weight,” emphasised independent researcher, Andy Scarlett.

“If the trailer doesn’t make its due contribution, the tractor brakes have to work harder to slow the outfit, which results in additional wear, higher service costs and a less stable outfit potentially prone to jack-knifing.” 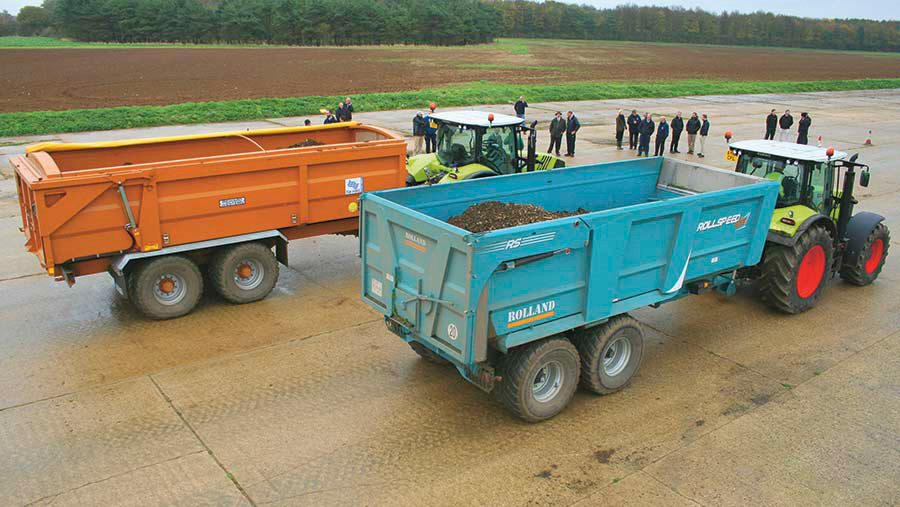 The accepted norm for any vehicle capable of exceeding 40kph is that it should generate 45-50% braking effort and that is the standard the 200 or so dealers equipped with Bagma’s Brake Safe test equipment aim for.

“A typical 16t tandem-axle trailer, fitted with suspension, flotation tyres and a roll-over sheet, will weigh about 6t unladen and when fully laden imposes about 3t on the tractor via the drawbar, leaving 19t on the axles,” says Dr Scarlett.

“The force generated by the four brakes must equal 45-50% of that weight on the axles to achieve balanced braking; if it doesn’t, you have the trailer pushing the tractor with a significant force.”

The Brake Safe unit enables the braking efficiency of a trailer – and other trailed equipment such as slurry tankers, muckspreaders and big drills – to be measured in isolation during a live test.

“With an air-operated braking system, the standard is for 50% braking efficiency to be achieved with 6.5 bar pressure delivered to the brakes via the tractor-trailer brake valve,” notes Dr Scarlett.

“There is some concern among machinery manufacturers and suppliers that the Department for Transport is considering proposals for new rules that would permit many existing trailers to operate at faster speeds and heavier weights by achieving that braking efficiency at a higher pressure.

“In that scenario, the tractor is braking harder than the trailer and the effect would therefore be to condone an unbalanced distribution of braking effort,” says Andy Scarlett.

“In my view, that is neither desirable nor safe.”

Besides, shortcomings in trailer braking performance can be rectified by upgrading to larger actuators for about £400 at most – a minuscule proportion of a trailer’s value to a farming business, he argues – and often by simply adjusting existing equipment.

This was amply demonstrated on a two-year-old trailer at the joint AEA/Bagma event, which recorded an average braking efficiency of 36% over a couple of runs.

This improved to 40% after the actuator rods were relocated one hole higher on the brake operating lever arm to get greater leverage, with two more settings available to extract further performance.