There’s no disguising the colossal capacity of Cross Agricultural Engineering’s tri-axle chaser bin, but with size comes cost and paying out £100,000 for a one-month-a-year item is a difficult decision to justify.

However, Simon and Gary Cross, the father and son team at Cross Agricultural, claim their new bin can fill a variety of different roles throughout the year – and that will help it to pay its way. 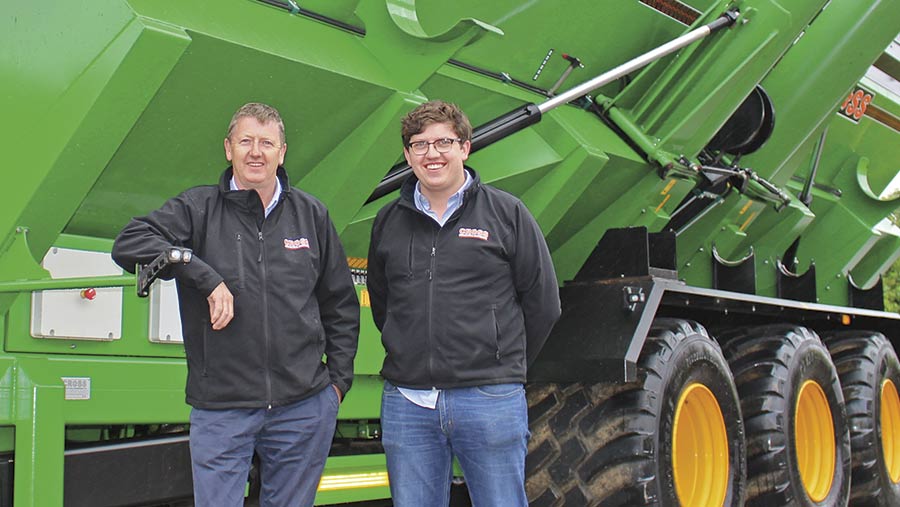 “Unloading grain from the combine at harvest, filling the drill with seed, fertiliser carting in the spring and it has the option of both fertiliser and seed being transferred by separate augers into the drill.”

Gary Cross, who graduated from university last year, devoted his thesis to the research and design of the multi-purpose chaser bin after sketching out initial plans four years ago.

Strip it back to its chunky bones and there are eight V-shaped angled supports welded along the chassis length to give the bin its strength. The axles are HGV spec and the chassis has been reinforced to make sure it can cope with the full 46cu m capacity.

The augers are driven from a 1000-speed shaft at the back of the tractor, which is reduced to 540rpm on the trailer.

Splitting the bin with a fixed internal wall gives a 55:45 divide to keep the drill running with near-equal amounts of seed and fertiliser. Both sides can run independently or together, with a dog clutch employed to separately engage each discharge auger as required.

“If we used hydraulic pumps to run the augers we would compromise on either speed or power,” says Gary.

“Instead, the pto provides direct power and speed is dictated by the tractor’s engine, so we have no worries about the hydraulic pumps overheating.”

Powered by a chain drive at either end, the two 150mm horizontal augers run the length of the V-shaped trailer and carry the material to the two centrally-mounted, 400mm diameter out-loading augers.

“A front- or rear-mounted auger can be too power sapping and grain is damaged on the journey by bouncing around in the augers. In those situations, some grain can end up travelling the full length of the bin,” says Simon.

The horizontal augers have been given triangle-shaped hats to provide some protection from the weight of the material above.

These protective bars can be raised and lowered to control the feed of material to the auger, and so the rate of unloading.

Locking the variable-position hat open at its widest position of 300mm across the full 4m internal length allows an unloading speed of 3min 30sec through both augers.

The fully extended augers reach 2.8m from the edge of the trailer to the tip of the spout.

To try to manage the strain of that overhanging metal, the augers fold out and rest directly onto a V-shaped frame, which transfers the weight down to the chassis. The bottom half of the auger is built into the frame, so only the fold-out section needs supporting.

“The frame is the strongest part of the machine and mounting the augers in this way means we don’t have to add any ballast weight to the opposite side,” says Gary.

“Both auger outlets also swivel, which gives an extra 900mm throwing distance each side to save time repositioning.”

A 200mm PVC pipe clips onto both auger spouts to improve unloading accuracy, too. 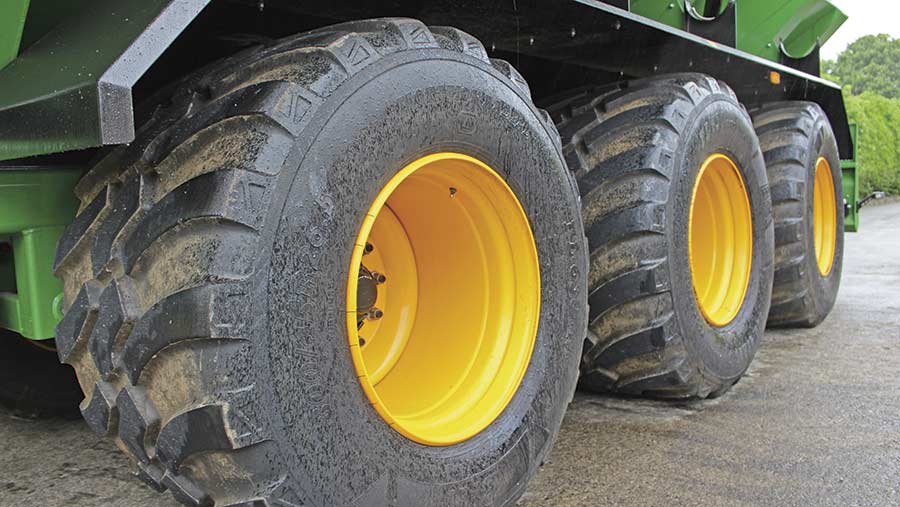 “If you can bulk fill a lorry on the headland in one visit then it keeps field compaction to a minimum, reduces the time spent travelling to and from the grainstore and slots into a CTF system perfectly,” says Gary.

Farms that have already adopted a CTF system will know the benefits of keeping tractors and trailers out of the field, and to spread the near 15t empty weight it is fitted with 800/45/26.5 BKT flotation tyres. A steering rear axle should also help negotiate tight gateways.

A Fendt 724 was paired with the bin on the test farm and had plenty of power for the unloading job, but realistically it will need closer to 300hp to make sure it’s the boss on steeper slopes.

Once the drill hopper is lined up under the spouts and the tractor’s pto is running, the augers are engaged and flow rate altered through a small remote that connects via Bluetooth to the control unit.

It’s a fairly basic looking kit, but works fine and can be replaced for £11 if it gets lost.

It also means the operator can fill the drill without working underneath a swinging bag or wrestle to tie it off. 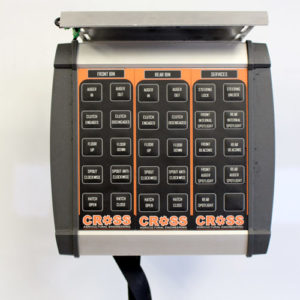 “The first bin had a yellow roll-over sheet, but once it had been filled with urea the plastic started to melt in the heat and sunlight, so we now fit a black lid to keep it dark,” says Gary.

The control panel was designed in-house but the buttons weren’t backlit so it was hard to know which one to press in the dark.

A small hood that carries LEDs has now been fitted on top of the control box to light the controls.

Cross has identified the USA, Australia and Russia as its main target markets.

However, three have been sold in Ireland to farmers who run them alongside artic lorries to reduce tractor and trailers numbers.

Realistically, such a high cost set-up will appeal only to large farmers or contractors running two or more combines each churning out over 100t/hour.

The ticket price will also be a natural deterrent – expect to pay around £100,000 before you look at an options list that includes weigh cells and tracks.