Some form of cover for agricultural trailers is becoming commonplace to secure loads or protect them from the elements and contamination.

They range from cut-to-size covers with elastic securing straps and manually-operated roll-over sheets to powered designs that provide rapid, delay-free covering of loads.

Sourcing options include the trailer manufacturers themselves or specialist suppliers which offer standard kits or a made-to-measure service that can also include installation.

Read about the options below and watch the videos of how different covers work.

Side-to-side roll-over sheets enable members of the Red Tractor Assurance scheme to comply with the requirement for trailers making off-farm deliveries to protect the crop from potential contamination.

This mirrors the Trade Assurance Scheme for Combinable Crops (TASCC) rules for commercial hauliers and forms part of the Red Tractor OT (off-farm transport) regulations, which have recently been revised to require the membership number and individual trailer identity number to be displayed on the rear and sides of the trailer.

In terms of hardware on the trailer, arches front and back – and also in the middle on longer trailers – should ensure the heavy plastic covers shed rain water.

The main sheet cover options are: 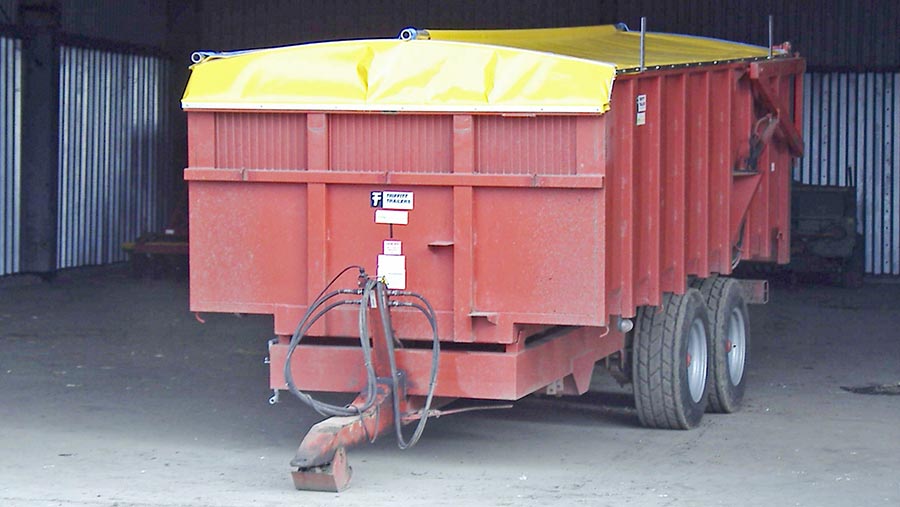 Covertec supplies kits for self-fitting or will measure, make and install a manually-operated roll-over sheet

Covertec Structures at Lutterworth can supply a kit for £1,200 based on the buyers’ measurements, but the full service is not much more at £1,575 to have the trailer measured and the cover made and fitted.

In common with a number of designs, once the trailer is loaded, the sheet is deployed either by pulling it across using a rope previously attached to a securing strap before the cover is opened or by activating an electric or hydraulic motor. 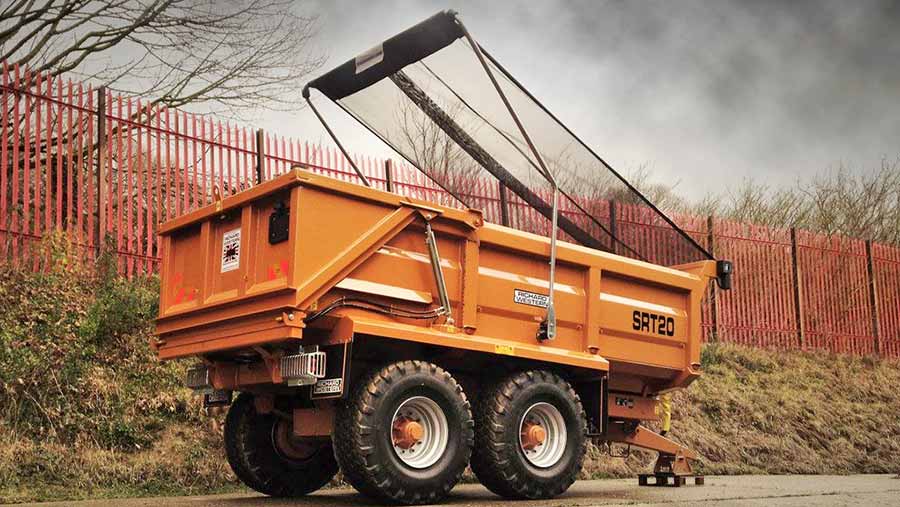 Richard Western offers a fitted bulker sheet for £591, a manually-operated side-to-side roll-over sheet for £2,012 and a powered version for £3,695. An arched front window adds £800 to a Richard Western SF trailer but is standard on RC and SWT models. 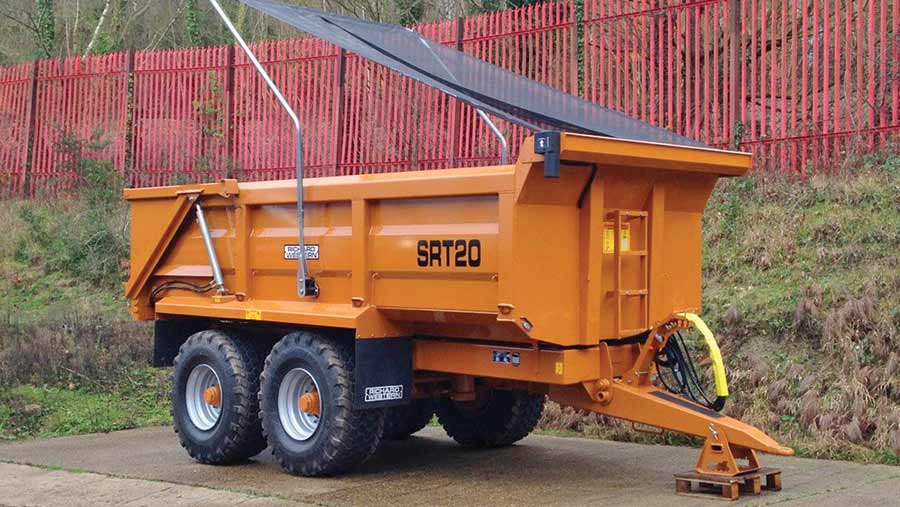 With flip-over covers, the mesh or PVC sheet is pulled off the roll by powerful steel springs and reeled back in again by an electric or hydraulic motor

There’s also a version that mounts on and rises with the tailgate. A hydraulically-operated end-to-end net cover costs around £2,000. 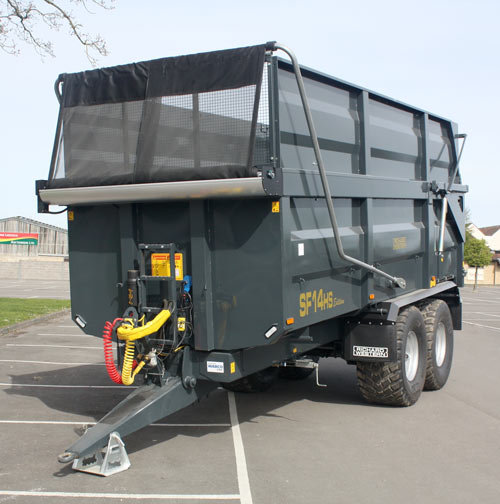 Harry West and Marston trailers manufacturer Mallinson Fabrications has roll-over sheet options that are fixed along one side and secured by ratchet straps on the other.

A long winding handle stored on the side of the body slots into the central pole so that the sheet can be wound in and out from ground level.

Harry West charges £1,400-£1,600 for this installation on trailers of different sizes. 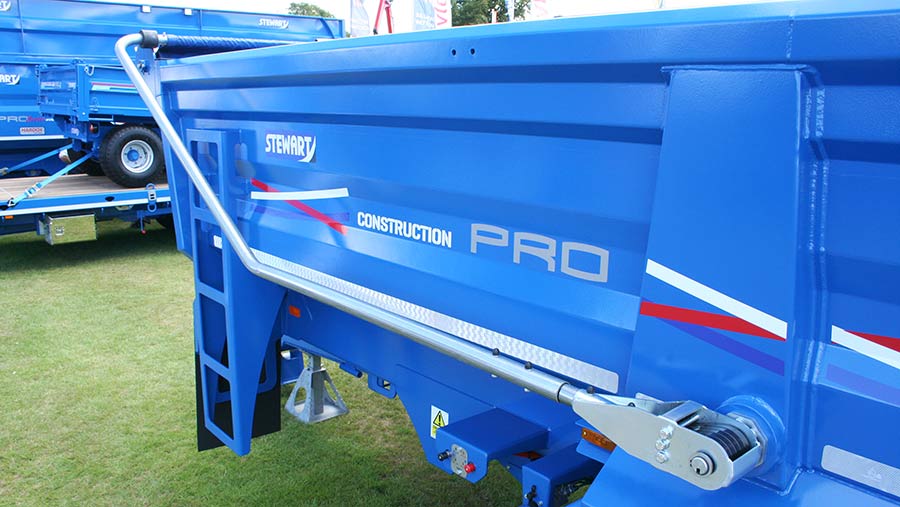 Frame and spring unit used for the AgriCover by manufacturer Transcover

Unless the hydraulic version is fitted, Stewart Trailers provides a length of nylon rope stored on hooks alongside the central ratchet strap to pull the sheet closed after it has been opened using a winding handle.

To avoid the front and rear side straps falling into the body, they are held in stiff covers to the trailer sides and hooked on to the sheet once it is in place. 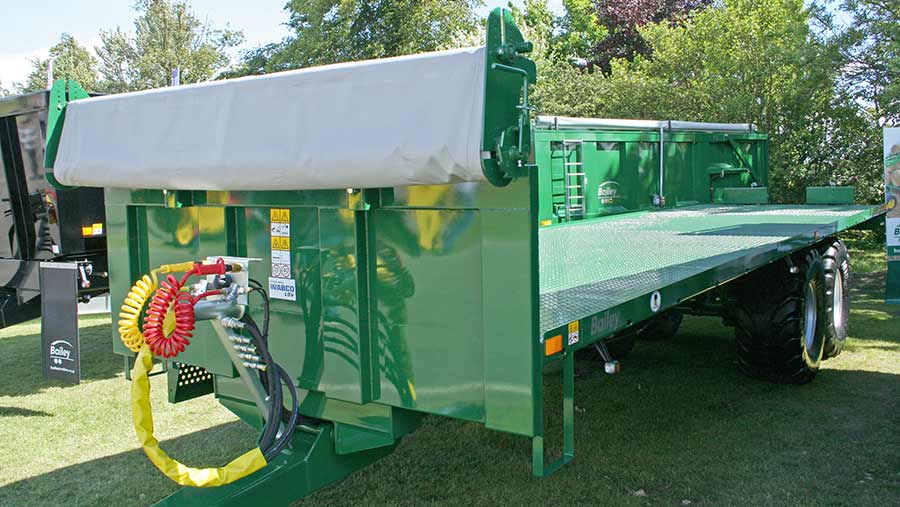 An extending dog lead stored in the same position is the Bailey Trailers solution for its £1,400 EasySheet, which can have hydraulic drive to the winding pole.

The same device is used to pull out the headboard-mounted sheet available on the Lincolnshire-based company’s potato box flatbed trailer.

It keeps potatoes dry when harvesting in wet weather and free of road salt and other contamination thrown up by the tractor wheels in wet or especially dusty conditions.

A ratchet winding mechanism pulls the sheet tight once it has been secured to the rear end of the trailer and to wind in the sheet ready for offloading. 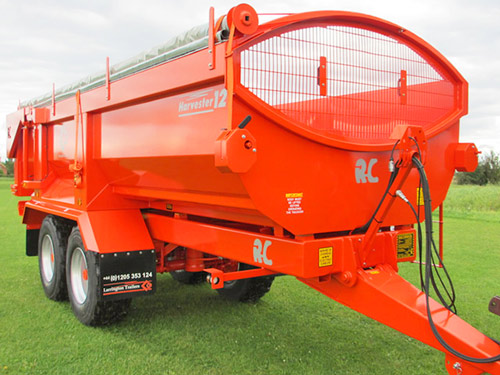 Ratchet winding mechanisms are also used for the manual roll-over sheet available on Larrington Trailers, especially when fitted with optional 450mm arches to give adequate clearance over heaped potatoes and other loads.

Larrington Harvester trailers are available with 150mm arches for low buildings and the more common 300mm version, which is said to give good water run-off.

The most pronounced arch configuration costs no more but the £1,675 ratchet mechanism helps pull the sheet over them more easily.

There are two ratchets at shoulder height on either side at the front of the trailer connected by a webbing strap that rotates the main sheet tube along the arched tracks.

Shafts transfer drive to the far end of the poles at the same time and the ratchet holds the sheet taught once fully deployed.

A roll-over sheet system with hydraulic power operated at the trailer or from the tractor cab is also available but costs significantly more at £5,200. 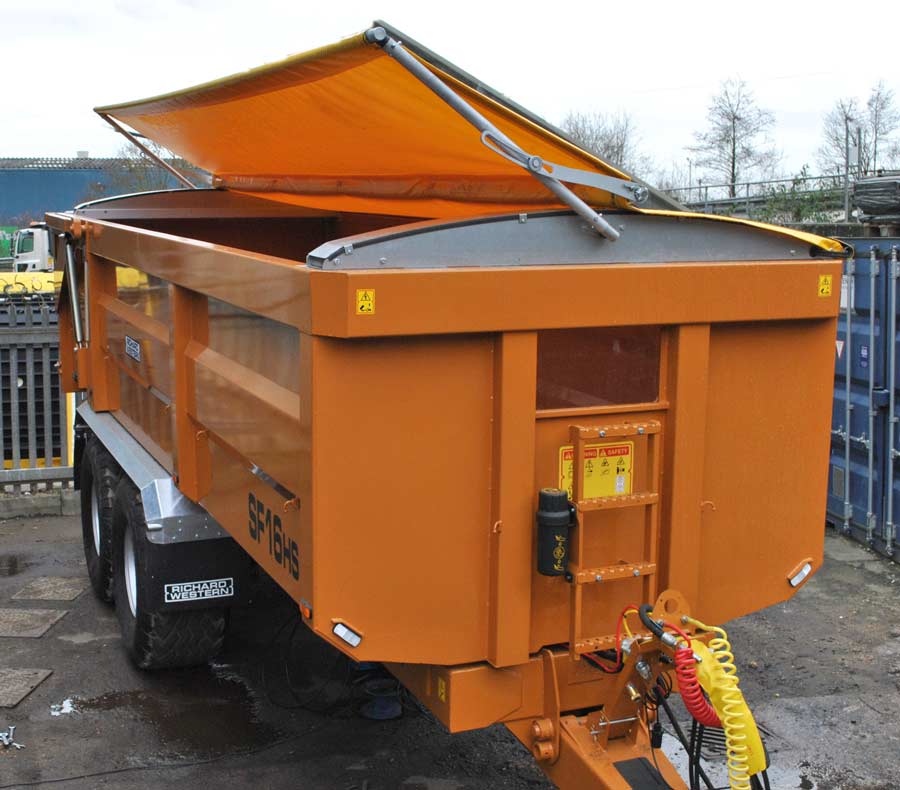 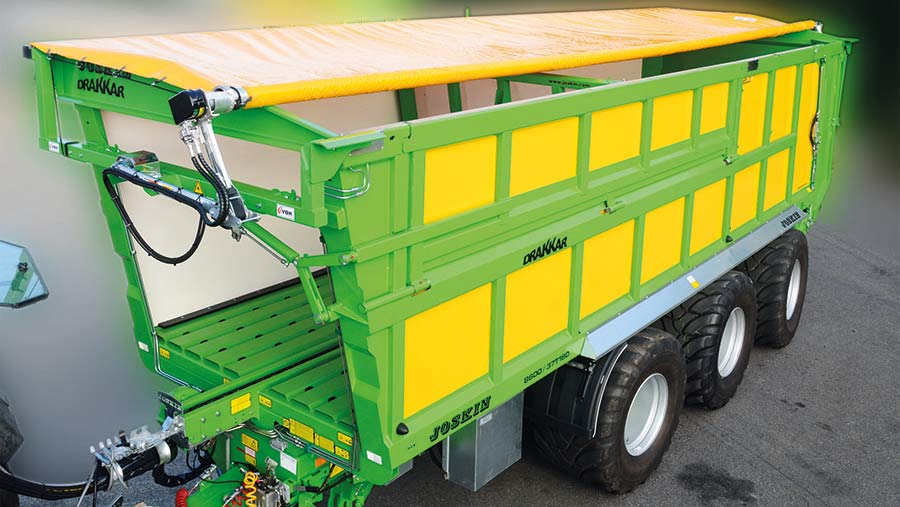 It places a heavy-duty waterproof plastic sheet over the trailer body and the crop using a hydraulic motor to roll and unroll it, with an articulated arm at each end guiding the roller over and a short distance down the side of the trailer body.

Together with elastic tensioning chords at each end of the sheet, this ensures the cover keeps out rain and pollutants, says Joskin, while keeping in any light crop or associated debris.

On a tipping trailer, the cover can remain closed while the load is discharged because the sheet is secured on a separate frame with one end mounted on the hydraulic tailgate.

Manual, electric and hydraulic drive options are available again, with the sheet spanning the body at the same height as the sides – so there is no scope for covering a heaped load – and retracting to the front of the body.

So-called flip covers are the most popular means of deploying a relatively light plastic mesh sheet to retain loose material from loads of poultry manure, compost, maize silage and the like.

Typically, they comprise two galvanised steel arms either side of the trailer body attached to compact leaf-spring cassettes that deploy the sheet once the trailer is loaded from a roll positioned at the front of the body.

The mesh sheet is pulled back using a winding handle at ground level or – more commonly – an electric or hydraulic motor.

The main mesh cover options are: 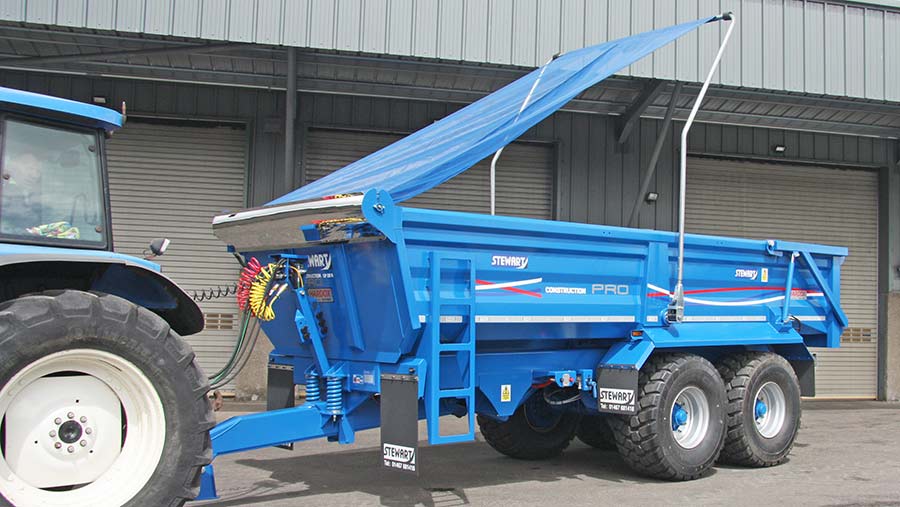 In Kent, Transcover produces a similar front-to-rear mechanism for tippers or push-off trailers with zinc and powder-coated finishes for the arms forming the frame and electric direct drive or a hydraulic motor and worm gear unit reeling the sheet back in.

Material options include supermesh, described as a lightweight but stronger alternative to standard mesh, and pleated, which is manufactured with a fold running along its length that opens to completely cover a load when deployed.

Side flaps are available and so is a PVC sheet in place of mesh to provide a waterproof cover. 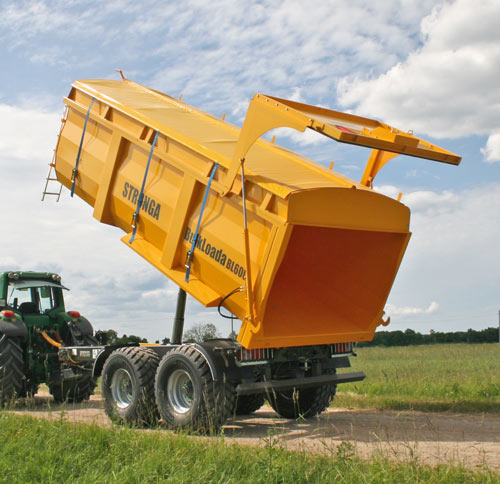 The Agri-Flip 9000 with electric motor drive will pull back the cover in less than 10 seconds, says Shur-Co, also based in Kent, which also supplies roll-over kits from £650 manual to £3,000 for an auto electric version, and end-to-end systems – the latter with sliding arches to clear heaped loads – as well as side-folding mesh lids.

Another folding screen option is produced as the Duo-Cover by Joskin for its Silo-Space triple axle silage and multi-purpose trailers and Drakkar push designs, priced at £7,920.

While the trailer is being loaded, the two full-length screens are positioned flat against the outer sides before being rotated through 270deg by hydraulic motors to lay on top of the load to prevent light forage and other crop material being blown out. 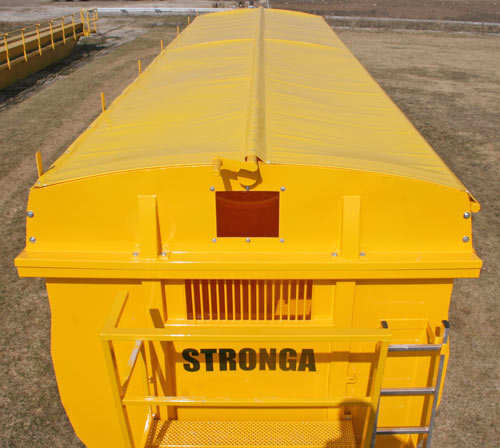 The front-to-back sheeting system available from Bailey Trailers is priced £2,850. Richard Western charges a similar amount at £2,745 and Larrington Trailers lists its version at £2,625 for the system sourced from Transcover, which Stewart Trailers also uses.