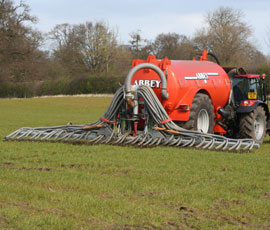 The days are long since gone when turning on the slurry tanker produced a huge fantail of liquid. In today’s environmentally-consciousness world, low-trajectory application of dirty water and slurry is the norm.

Even so, there is plenty of evidence to show that while a low-level spread reduces atmospheric pollution, applying these materials in this way still results in high levels of nitrogen loss.

So farmers and contractors have come to recognise that placing slurry on the surface in bands – or beneath the surface in slits – reduces losses and ensures nutrients are available to help the grass grow.

Such techniques reduce crop contamination and interruption of grazing and each of these techniques has its attractions.

• Workrate is the main one for dribble-bar application, which puts slurry or dirty water on the ground from flexible tubes arranged along a full-width boom without any risk of atomisation

• By placing liquid immediately beneath the surface, disc or tine injection is best for retaining nutrient value

• Trailing shoe application combines elements of both techniques. Like dribble-bar application, it places liquid on the surface but in a fashion that moves foliage aside and creates a shallow slit that helps absorb the liquid.

When it comes to running costs and workrates, trailing shoe application also falls between the other two techniques.

Research trials have shown that nutrient losses from overall spreading of slurry to the surface a grass field can result in up to 80% of the available nitrogen being lost to the atmosphere as ammonia.

Band spreading from a dribble bar or trailing shoe applicator and shallow injection minimise these losses by reducing the surface area of slurry exposed to the air.

Trials in Holland have shown the comparative performance of different application methods. Using splashplate application as the baseline, deep injection can cut nitrogen losses by 99%, while shallow injection achieved an 86% reduction and the trailing shoe technique cut losses by 69%.

As far as practicalities are concerned, any technique that involves pumping slurry through relatively small-bore pipes is prone to blockage.

That means trailing shoe and other placement applicators must either be confined to handling liquid separated from solids or must be fed with slurry that has passed through a fibre-chopping macerator – a pretty costly bit of kit that manufacturers need to incorporate into their trailing shoe applicators.

What about workrates? They are bound to be lower with a trailing shoe applicator on the tanker than when the material is released against a splash plate.

However, travelling between field and store is the most time-consuming aspect of slurry spreading. So, even when discharging a load takes 50% longer through a trailing shoe applicator, a tanker making a 2km round trip will probably apply only 9-10% less slurry in an eight-hour day.

The Abbey Machinery trailing shoe applicator is manufactured with a fully galvanised finish in 6m and 7.5m sizes. The 6m can be used on a vacuum tanker but both sizes can be mounted on a tractor and supplied by umbilical hose.

Steel shoes spaced 250mm apart are mounted in pairs on strips of flexible spring steel; together with hydraulic loading; these aim to provide sufficient pressure to part the foliage and create a shallow slit. 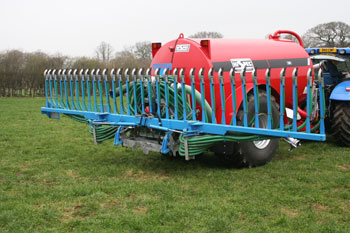 The Greenstar range of trailing shoe applicators from Bomech has a rotating toolbar so that for transport and at the end of each row, the outlets are raised to a vertical position. That prevents any discharge of residual liquid in the system.

There are three versions: the Greenstar-Flex comes in four sizes from 5.3m to 8.6m; the Greenstar-Simflex has side folding booms of 9m and 10.5m; and the Greenstar-Multi comes in five sizes, with 12m to 24m booms that are supported on land wheels. 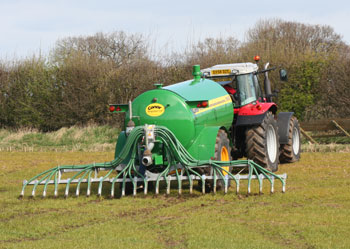 The Trailing Shoe system from Conor Engineering is designed as an integrated unit for the company’s slurry tankers. The frame is available in working widths from 5m to 9m and folds to 2.55m. 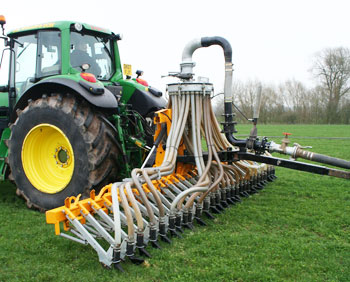 A trailing arm under spring tension carries each of the curved steel shoes on Joskin’s Multi-Action applicator. The arms are mounted in pairs at 215mm spacing on a vertical pivot, which allows them to ‘steer’ through curves without stress and strain being applied to the assembly. There are six working widths from 3m to 7.74m for tanker or tractor mounting. 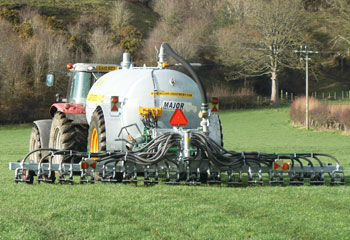 The Major MJTS6430 slurry applicator is 6.4m wide and has 30 outlets mounted in pairs on a steel strip spring that applies pressure to the carbon steel coulters.

Slurry is distributed via a 100mm Bauer coupling to a Vogelsang ExaCut chopping unit with self-adjusting and self-sharpening blades, and then passes along 40mm tubes with couplings that allow simple maintenance of the rubber nozzles. 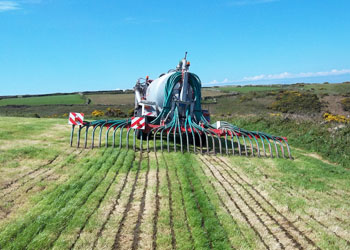 The EL8 trailing shoe applicator from Pichon uses Bomech slitting shoes mounted on steel strip springs on a toolbar available in 7.5m and 8.8m widths, with 34 and 40 outlets, respectively. The 7.5m version folds across the back of the host slurry tanker within the same overall width. Pichon’s own chopping distributor, featuring auto-reverse and a stone trap, is used on the device. 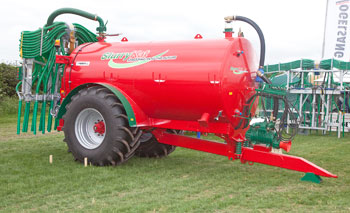 The trailing shoe applicator from SlurryKat Engineering is built with a single-beam frame carrying steering shoe elements fixed at 215mm spacing. Each element can ‘steer’ through +/-15 degrees so that even application can continue through curves. The share is said to be self-sharpe.