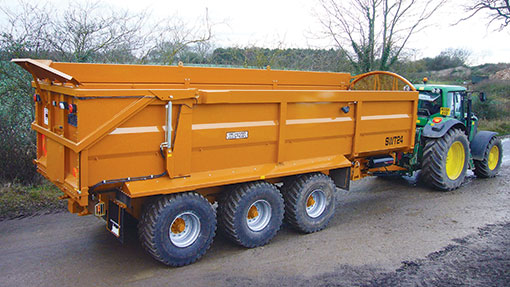 High-spec, big capacity triaxle trailers have been selling on the continent for years. Now, with a change of legislation on the cards, British manufacturers are launching models to compete. Nick Wigdahl reports.

Three-axle trailers may look huge, but they have a lot going for them. If it’s sheer capacity you want, such as carting corn off a big combine, they score highly.

James Stewart from Scottish manufacturer Stewart Trailers, which has recently added a three-axle model to the range, also makes the point that chaser bins only work in certain farm situations and can’t match the versatility of a large trailer.

Stability is another reason for opting for three axles, as is the reduction in ground pressure, he says. The third axle adds weight, of course, but the loading/axle for a 24t trailer is typically 8.5t compared to 10t for a twin-axle, 18-tonner.

Suffolk maker HM Trailers, which sold the first of its new triaxle HM2224 models recently to a Yorkshire customer, agrees that stability is an important factor for many farmers. “The customer’s first words were ‘It’s very hilly here and we don’t want any trailers tipping over’,” says managing director Grant Perry.

Richard Western, also based in Suffolk, has been exporting triaxle dump trucks (pictured above)  to Scandinavia for years. It has experience of selling triaxle chaser bins and is now selling 20t and 24t triaxle beet and grain trailers to big East Anglian farmers and contractors.

Sales of triaxle models across the sector are limited at the moment but most manufacturers are said to be experiencing a steady upturn in interest.

Triaxles come into their own when the trailer tips the scales at 18t or more, and with a 10t tractor, the gross weight quickly reaches 28t. A change in the legislation to 31t gross weight might merely legalise what some farmers are already carrying.

“Increasing trailer weight is always going to be an unpopular topic with the haulage industry so we might as well push for a figure of 40t rather than being timid with 31t,” says Mr Stewart.

Mr Western fits a steering third axle as standard and finds that most customers specify a steering first axle as well.

“In rutted beet fields, the steering axles counter the tendency of long-chassis trailers to just plough on straight ahead. Without steering axles, the increase in fuel consumption is surprisingly high,” says sales director Mike Murray.

The wider tyres push makers towards a narrower chassis but this can work against stability.

Tare weight rises are also prompting manufacturers to lighten their machines. Stewart, for instance, offers a Hardox steel body at 3mm thickness. The material costs three times as much as regular steel but only half the quantity is required.

However, a lighter body means there is less weight pushing down after emptying – a potential time waster – so Stewart has fitted a quick-release valve to the cylinder.

Lincolnshire trailer specialist Richard Larrington is one of the most experienced companies in making three-axle trailers, thanks to its big export market. Its new reverse-tipping ejector trailer, however, takes a different tack by allowing trailers to tip straight into other trailers or lorries.

French maker Rolland, meanwhile, is tackling the weight issue by using an all-aluminium chassis and body machine. The technology comes from semi-trailer manufacturer BenAlu, and Rolland UK says is already working on an order for five units.

While the base price of a triaxle may not be that much more than a tandem, adding air brakes, a steering rear axle, flotation tyres and full lighting spec increases the final bill. Stewart’s full-spec 24t PRO PS 24-41H costs about £33,500. HM’s 24t model has a broadly similar spec and costs £28,000. Richard Western offers the lower-spec Suffolk 20t for £24,300 and higher-spec Wellington for £33,500, while prices rise for the 24-tonne machine.