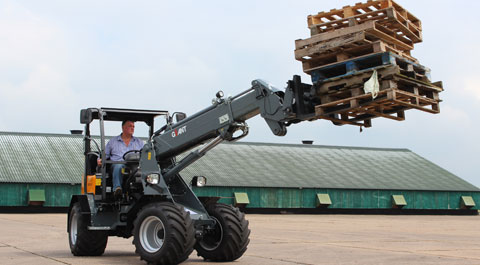 Lincolnshire dealer TRP reckons there’s room for another wheel loader maker in the UK so it’s started importing a new brand from the Netherlands.

Built by Tobroco, the Giant range of wheel loaders has 25 models with lift capacity ranging from 1.1- to 2t. All are powered by Kubota engines, sit on

Cromer axles and have a Bosch Rexroth hydrostatic transmission.

TRP is planning to sell the machines through its own dealer network, which includes branches in Sleaford, Everton and Perth, but it is looking to set up a network of other dealers too. “We wanted to bring in some smaller machines and the main attraction with Tobroco is the quality of the product,” says Jonathan Pearson, managing director.

Five models will be bought in to start with, but the 60hp V6004T Tele is likely to be the most popular model for farmers. At 4m long and just over 1.5m wide (on standard tyres) it is similar in proportions to some of the smallest telehandlers, but it should have a better turning circle.

Cab height is not the lowest at 2.35m, but if you opt for the safety hoop instead it will come in at 2m. A poultry spec machine is also available, which is about 1.8m high. Full cab machines come with heating, radio, working lights, mirrors and front and rear wipers. A road legal pack is available at a £1,000 premium.

Lift capacity is a respectable 2t and at full extension the V6004T Tele can lift to 4.25m – ideal for loading a lorry. Choosing the optional boom suspension will help keep the operator in his seat too.

The loader’s two-stage hydrostatic drive is engaged via a sliding forward/reverse switch on the top of the main joystick and a rocker on the side handles range changes. Flat out it will manage 28kph and it has a diff lock for when the going gets tough.

At the front end, Tobroco has come up with its own bracket design and attachments, but it is willing to fit any fixing system. So, if you’ve got loads of old skid-steer attachments lying around there’s no need to worry about compatibility. TRP says it is flexible and willing to order machines to customer’s individual specifications. It can even come with a mechanical pto.

Prices for the V6004T Tele start at £42,500 and there is cheaper ridged loader option that will set you back £40,000. Plans for bigger models are already on the drawing board. These will boast higher lift capacities and will eventually come with more power.

Tobroco also has a micro telescopic handler in its line-up, which will be coming to the UK in January 2013. This is called the Tendo and will be powered by a 36- or 45hp Kubota engine. It has a 1.4t lift capacity, 4.8m lift height and cab height is a shade under 2m.

One Giant machine – a V6004T Tele – has already been sold to poultry litter contactors, Pedersen Contracting in Woodhall Spa, Lincolnshire.

In 2001, the firm expanded and started building Giant wheel loaders at its factory in Oisterwijk, Netherlands. There are now 95 employees working and they are churning out about 35 machines a week.

About 1,100 giant machines were sold in 2011 and Tobroco plans to be shifting 2,000 by 2015 and 3000 by 2020. The Netherlands is the biggest buyer at the moment accounting for just under half the sales, but the biggest growth is expected in Sweden, Norway and the UK.