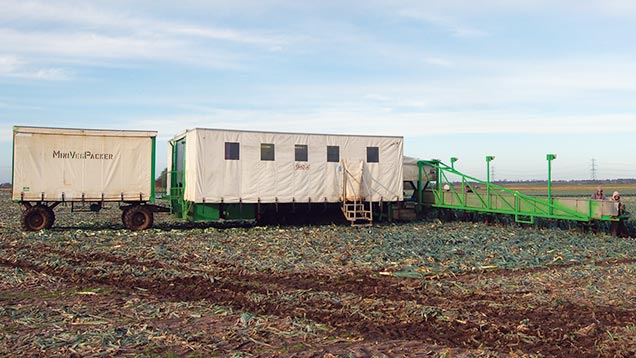 In the latest in our series of unusual harvesters, we head to Cambridgeshire to find why the humble leek is becoming an all-year-round item.

Leeks used to be a winter crop at Allpress Farms, Chatteris, Cambridgeshire, either top-lifted and processed in a packhouse or cut and stripped on harvesting rigs in the field.

The first system gives you more control over processing but involves having to return huge quantities of waste leaf to the fields, so Allpress prefers the latter method.

The company runs four rigs supplied by Tumoba at £300,000 each plus three older ones. Each rig can harvest 10-12t of leeks in an eight-hour shift and the machines have got bigger but more efficient.

A Deutz 115hp engine provides the grunt to drive 900mm-wide steel tracks that support a machine, which weighs 35t when fully loaded.

The good news is that the slow pace of work means a rig will last 10 years or more.

A complete leek harvesting crew involves 25 people: 14-16 on the front hand pulling the plants, nine on the platform weighing and packing and one quality controller.

The cutting team top, tail and strip excess leaves off before throwing the leeks on to a conveyor, two of which are supported by the 28m-wide boom.

The leeks pass through a washing bath, which uses 6,000 litres of water; all of it is recycled during the day before, being replaced in the morning from a bowser.

Each tonne of leeks require 500 litres of water for cleaning, and soil is always an issue.

A web takes the leeks up on to the platform, where they are washed again before being sorted by hand into different sizes and qualities.

Nothing is wasted – leeks that don’t meet the specifications go for processing for soups or stews.

The leeks are put into boxes and stacked 45 to the pallet. The rig can hold 1.5t before it needs to transfer them to the attendant trailers.

The trailer is winched on to the rig, then, when fully loaded with pallets, it is dragged off by a tractor that drives around to the front of the trailer and takes it directly to the packhouse.

The crews are sourced from Eastern European countries. Men tend to work as cutters, women as sorters and packers.

About 50% of the crew are husband and wives, with some of them having met on the job.

On average they work four seasons, though some have been doing the job for 10 years.

Slow in the field, fast on the road

The rig will travel about 150m during an average day. For loose leeks, an average yield is 25t/ha but it can hit 35t. Leeks destined for pre-pack will yield about 18 t/ha.

To move the rig, the boom is taken off the front. It and the main body of the machine fold down to 3m, the former is transported on a low loader and the latter on a general flat trailer.

Ease of dismantling is a crucial factor – a machine that leaves the Chatteris yard at 8am can be up and running near Nottingham by 2pm.

Leeks can be stored for up to four weeks, although Allpress prefers to keep this to just one week to ensure the consumer gets a fresh product.

Their packhouse site at Chatteris can pack and store up to 450t, which sounds a lot but is only two weeks’ demand.

Demand for leeks all year round has seen Allpress reduce the period in which it can’t provide fresh leeks from 10 to just five weeks in the year.  Traditionally, leeks were a winter crop whose sales peaked at Christmas, but this has flattened out.

Though new varieties are better able to withstand frost, even the best breeders couldn’t cope with the winter conditions in 2012. During a five-day period, temperatures in some of Allpress’ growing locations went from -16 to +16, resulting in severe crop damage.

So it seems technology changes but the British weather still holds the trump card.