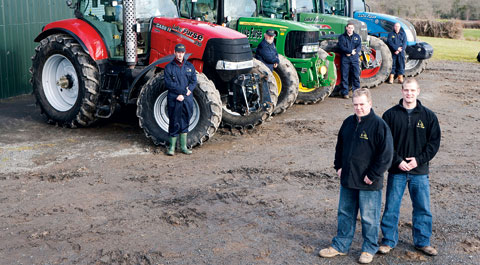 Two years ago a Devon contracting outfit embarked on an epic tractor test to see which brand of tractor was best for its business.

Luke and Lloyd Furse dreamt up the three-year trial in 2011 after a couple of bad experiences running single-colour fleets. Unable to decide which brand was best they decided to buy four tractors from different makers and run them side-by-side.

Son Lloyd chose a top-end Fendt Vario 718 and a John Deere 6930, while father Luke opted for a Case IH Puma 210 and a much cheaper Landini Landpower 135.

Each tractor was then put to work and the drivers carefully monitored reliability, power, comfort, fuel efficiency and value for money.

This time last year we went back to see how each machine had performed. At that time the Case and the Fendt were the front runners, but the John Deere wasn’t far behind and the Landini was holding it’s own too.

See the standings after year one below:

But the cheaper Italian tractor was the first of the fleet to be sold, leaving the farm just after our visit in April 2012. “We’re moving to higher and higher horsepower tractors and the Landini just didn’t have enough grunt,” says Luke.

“But in terms of reliability, equipment levels and driver comfort we couldn’t fault it – if they’d had something suitable we’d have definitely had another.”

The Italian tractor was also very cheap to own; Luke bought it for 32,000 with a two-year warranty, clocked up 1,800 hours and sold it for £25,000. It had no major mechanical faults either.

The Landini was briefly replaced by a used Case IH Maxxum 140, which was then upgraded to a Puma 155. 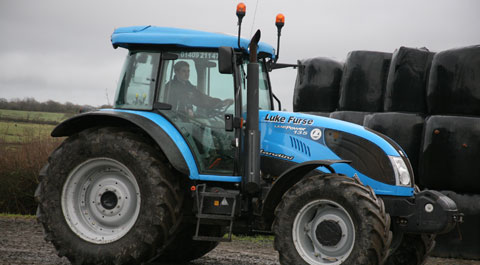 The heavyweight Case IH Puma 210 was the next to be sold after it suffered a transmission failure.

This happened after it had clocked up 2,700 hours and the bill to fix it was £11,000. Thankfully it was still under warranty.

“The Case Puma is a fantastic tillage tractor and the fact that we are now running three shows how much we like them.”

None of the other Pumas have had any problems in the transmission department, but they have had a couple of dealer visits for minor niggles. 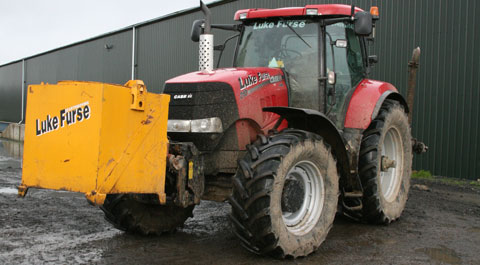 The John Deere 6930 is still on the farm and has been a very solid performer.

Since the start of the test it has clocked up 3,738 hours and has been pretty reliable. It did have a new head gasket, though, and the spool block had to be replaced, too.

From a driver’s point of view, the John Deere is comfortable to drive, has plenty of power and is a fairly good all-rounder in the field, says Lloyd.

The 6930 arrived on farm with a massive 5-year warranty, which means it is guaranteed to stay on farm for that time. “When the warranty does come up we would definitely consider having another, as this one has been so good, he says.” 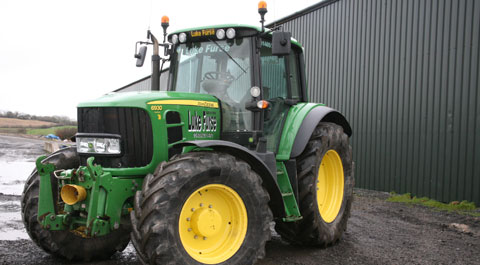 The original Fendt 718 is also still in active duty and was joined by another in 2012.

These have been the most reliable tractors in the fleet and have had no visits from the dealer, says Lloyd. “The only invoices in the folder are for oil and filters.”

They’re also the only tractors in the test that are now outside their warranty. Luke and Lloyd usually sell a tractor as soon as the manufacturer’s warranty is up, but the Fendts have been so reliable that they’re risking it for a bit longer.

The other reason is that the price of upgrading to an equivalent Vario II model is so high, says Lloyd. “There is a seriously big difference between the two models and because it’s going to cost so much to upgrade we’ve delayed the decision.”

Overall the Fendt has come out on top. Both of the tractors have been incredibly reliable, powerful, comfortable and excellent on fuel consumption.

The only downside so far is the high purchase price, but good second-hand values help offset this.

The Case Puma’s haven’t been as squeaky clean as the Fendts but they’re popular among the drivers and excel on tillage work. They will therefore continue to form the heart of the fleet.

John Deere is also likely to keep a toe in the door, particularly as driver wouldn’t be happy driving anything, says Luke. “One of the biggest things we’ve learnt from this test is listening to the drivers. They spend the time on the seat, so it’s important to give them a machine they’re happy with.”

For that reason Luke and Lloyd will continue running a mixed fleet. “Other than having a few different filters on the shelf, I can’t see any downsides.”