The Unimog has always been a peripheral figure in British agriculture during its 70-year lifespan, but Mercedes hopes a thorough overhaul of its engine and transmission will broaden its appeal.

It retains its ability to pull loads faster and more safely than most farm tractors, while beefing up several components has meant the pto can now handle 300hp rather than the previous 170hp. 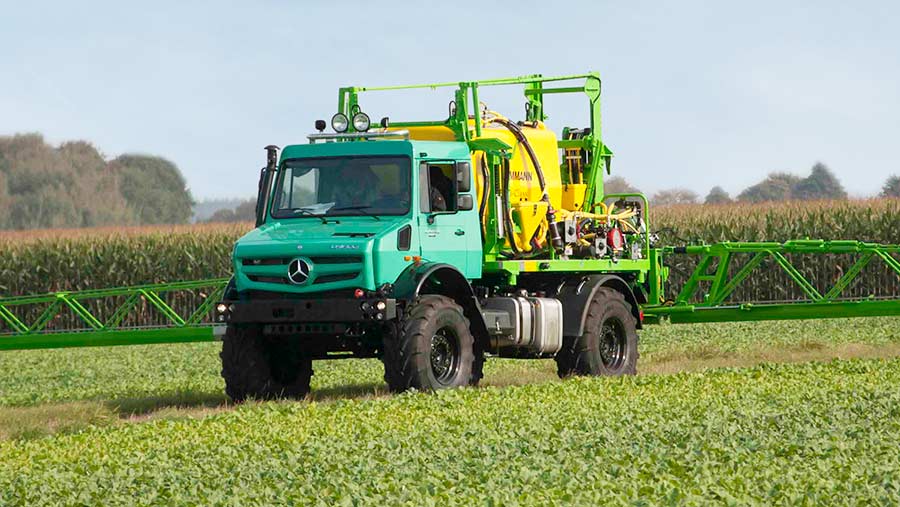 Eight models are split across three chassis sizes, offering outputs of 160-300hp from its four and six-cylinder engines. To keep things as simple as possible, model numbering equates to engine power – from the U216 to the U530.

The smallest models are unlikely to appeal to the farming market, reckons Mercedes, so it’s the 3-, 4- and 5-series that are likely to lend themselves to dedicated spraying or spreading jobs and make the biggest dent in sales.

Gearbox choice extends from a 16×8 powershift with crawler gears to a fully hydrostatic set-up.

The latter is managed by a lever on the steering column, which also controls the two-stage exhaust brake.

Portal axles give all models a 43cm ground clearance and a short nose lets it climb a 1:1 incline without burying the bumper.

Boots up to 495/70 R24 in size can be fitted in the factory and ABS comes as standard to maintain traction under heavy braking.

Four-wheel drive is switchable on the go, along with centre, front and rear differentials to lock up the drive for particularly gnarly terrain.

The spec list is vast, which offers would-be buyers plenty of options – including linkages, ptos, hydraulic pumps and more than 1,000 body variations.

It can carry up to 16.5t on its back and the maximum gross vehicle weight for the road can be up to 40t, too.

The biggest turn-off for the Unimog on this side of the Channel is the left-hand drive build.

However, Mercedes has come up with a pretty clever VarioPilot system that sees the steering wheel and pedals unclipped, folded up and walked across the cab on a full-width rail, before being locked in position. 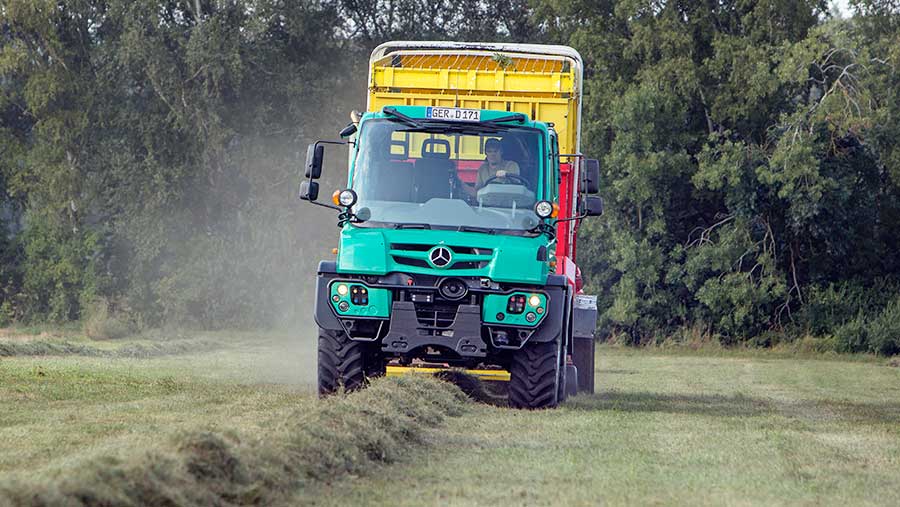 Unimog in the UK

Mercedes has assigned a new man with the job of boosting Unimog sales in the UK, and has targeted shifting more than 100 units over the next 24 months.

Now would appear a good time to push into the farming market, as contractors with growing customer bases travel further distances and AD plants continue to demand vast quantities of maize.

The machine’s 90kph top speed and standard rear pick-up hitch should ease the pressure for those doing a lot of road work with ag-spec trailers, too.

Recruiting and supporting dealers has been Mercedes’ priority. Until this year the number of sellers stood at four but the recent announcement of Farol, and another agricultural dealer to be revealed later this year, will take that number to six.

On top of that, the Unimog shares plenty of parts with the regular Mercedes truck range, so there are another 35 authorised repairers across the country, should you get into problems.

The cheapest slave-spec machine has a list price of £80,000, but by the time linkages, ptos and attachments have been added the average spend is likely to be closer to £110,000.

Obvious competition will come from the JCB Fastrac, which has a 80kph top speed but is better suited to fieldwork.