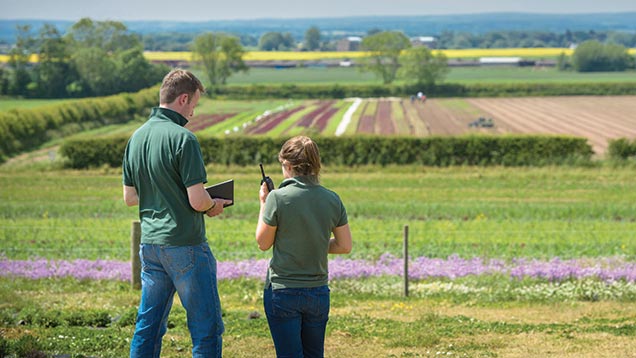 Mobile phones are wonderful things. You can call your dad in the next room or the other side of the world without giving a second thought, or check the weather, look at the cricket scores or a hundred other things.

But as a means of providing farm communication, they are not that brilliant. Their batteries peter out pathetically quickly and they take so long to connect, you sometimes feel like you would be better off with carrier pigeon.

PMR 446 walkie-talkies, on the other hand, are cheaper than a decent meal for two in your local pub and great for close-range conversation. But they struggle to send their signal much further than about half a mile – less if it’s hilly.

CB radio? Great fun, but do you really want the whole village to hear what is going on your farm or to hear 16-year-olds effing and blinding in your tractor or combine cab?

So what is the answer? Well, forward-looking farmers are turning back the clock to the 1970s and 1980s and returning to the way they kept in touch around the farm before mobile phones were even mobile – namely the two-way radio or PMR.

So what is the attraction of this “old” technology? To find out we tracked down Andrew Curtis, whose Yorkshire-based business CTS Radio Systems supplies farmers and other businesses from Durham down to Leicester.

He started the business in 1994 and has seen big changes in technology over the years.

“Simplicity is the attraction,” he says. “With two-way radio you can talk to everyone, at the same time, at the push of a button.”

“Years ago, you sent a bloke off in a tractor to do something around the farm but you didn’t have any way of communicating with him,” Mr Curtis says.

“But back then it often didn’t matter if it took half a day. Now, though, farming is all down to big machines, time and efficiency and it is planned like a military operation.

“It is all about asking a question and getting an instant answer.”

If you want to set up a professional farm-based radio system, it’s a lot easier than in the past.

There are two options: you can do it yourself by going on to the Ofcom website or you can get someone like Andrew Curtis to do it for you.

What are the pros and cons?

Let’s be honest. You can buy a perfectly good two-way radio from the internet and apply for a licence on the Ofcom website. You usually get a kit including a magnetic antenna and a cigarette lighter power lead. If you are into this sort of thing, though, the result might well be fine.

Two-way radio fitted in a combine

However, what experienced companies such as CTS can do is find out what you want to use the radios for, then tailor a system that suits your requirements. They then come and install the equipment for you, giving you a neat and safe installation that will not interfere with all the other electrical systems found in modern farm vehicles.

Is this the same technology as a walkie-talkie?

Both types transmit and receive but the difference is in the transmitter outputs. Walkie-talkies (known in the trade as PMR446s) are limited by law to a measly 0.5W of output, whereas the radios we are talking about here have a 5W output – 10 times the power.

The difference is huge. While a PMR446 walkie-talkie can transmit a couple of miles in perfect line-of-sight, its range drops to a few hundred yards at ground level and it hates hills.

A 5W mobile radio, by contrast, should be able to transmit over four or five miles or as much as seven miles if you are on high ground.

There are also UHF and VHF versions, points out Mr Curtis.

UHF models work on a 400-470mHz frequency and are best suited to factories and buildings. For agriculture, VHF models, between 136 and 174mHz, are the better choice.

One feature that is the same as PMR446 walkie-talkies is continuous tone controlled squelch system (CTCSS), which allows the eight main frequencies to be subdivided into 38 channels.

A brief history of farm communications

1970s Farm radios were the size of a hi-fi stack and lurked in the office or in a box in the barn. Maximum power was a decent 20W. A 18m aerial was needed, but you could communicate with a man in a tractor 48km away.

1980s AM Citizens Band radio from US meant we could all pretend we were in Alabama rather than Long Field. Big, silver and illegal, you could pick up a signal 30km away (mainly the local kids shouting “Ye-Haa good buddy”) but the everyone-can-hear-you technology was a bit disconcerting. The legal, FM Public Radio offering was never quite as good.

1990s Mobile phones came along in the early 1990s and revolutionised personal communication. But they were relatively expensive to use and slow to connect. Meanwhile, cheap, licence-free walkie-talkies called Short Range Business Radio were introduced by Motorola, (they were traditionally used by US mothers in shopping malls to stay in touch with their errant offspring). The 0.5W power output meant you could talk to someone 600-1,200m away. A good intro to two-way radio, they proved so popular that more frequencies were allocated and became PMR 446.

This all sounds good. But what does the Ofcom licence involve?

There are two sorts of radio licences, explains Mr Curtis.

The most popular is the Simple UK Licence, which costs £75 and lasts for five years.

It allows you to transmit and receive on frequencies set by Ofcom, and you talk directly between vehicles or hand portables. Power is limited to 5W.

I am doing a lot of contracting and would like to have a bigger range; what can I do?

Sounds like you need a Repeater Base, which rebroadcasts the transmissions from the vehicle radios, thereby increasing the range.

This system requires what is called a Technically Assigned Licence.

Ofcom will look at what coverage you want and what other transmitters there are in the area and allocate you a base frequency, antenna height and power output up to 10W to suit your needs.

Mobile radios are allowed up to 25W to increase their range, too. The price of the licence is usually about £125/year and gives about a 35km radius.

You can start with a Simple system and upgrade to a Repeater system later, if required. The radios are the same and can be reprogrammed with a laptop.

Some really big farming companies need to talk across a whole county and subscribe to commercial radio systems, allowing them to make mobile radio calls over 80 or 95km.

What is a good make of unit?

Motorola and Tait used to make the best units and were the market leaders up until the mid-1990s, but others, such as Kenwood and Vertex Standard, have now caught up.

Andrew Curtis with the Vertex Standard

Vertex Standard is a good all-rounder with enough features to make it useful.

I want to put a unit in the tractor; what about the aerial?

An antenna is designed to work on a metal car roof giving it a horizontal ground plane.

If you have an older tractor with a steel roof, popping a cheap mag mount aerial on the roof will probably be fine. However, most tractor roofs are now plastic, which stops the antenna transmitting properly.

“To get any sort of decent signal you need to create a ground plane, usually by fitting a piece of metal or metallic foil at least 400mm in diameter under the aerial.

“Taking the roof apart on most tractors and combines can be daunting”, says Mr Curtis. “Most people are happy for us to do that bit.”

It depends who you go to, but Mr Curtis says he would charge about £299 for a Vertex installed in a pickup or tractor.

The same unit installed in a combine with a DIN mount and ground plane would cost about £349. It takes about two hours to fit one properly in a tractor.

The typical cost of a hand portable starts at about £159.

What is the latest technology?

Digital private mobile radio (PMR) is the latest thing. It first appeared 10 years ago and is now widely used by police forces. It allows you to talk to different people or different groups from the same unit.

So, on a big farm, you could press one button that puts you in contact with your arable team, another for the livestock team and a third for the packhouse. The units cost about £100 more than a standard PMR each.

How can I find other companies in my area that offer this sort of equipment?

Your best bet is to search online for “licensed business radios”, but make sure you stay away from walkie-talkies.