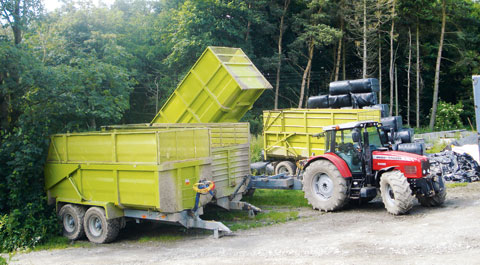 Lugging around fully loaded, ag-spec trailers at 50kph is pretty much the norm these days, but operators are often breaking the law the minute they roll on to the road.

That’s because, like the fortunes of the English football team, road rules for farm machinery have not changed for donkeys’ years.

The speed limit for tractors without sprung drawbars remains a snail-like 20mph and the max train weight is 24.39t. To put that into perspective, a Case IH Quadtrac 600 on its own tips the scales at 24.4t.

In 2011, dealer organisation BAGMA teamed up with the NFU to suggest a few ways to overcome one of the biggest safety sinners – the standard of hydraulic trailer brakes. BAGMA reckons only 12-15% of trailers can muster adequate legal braking force.

Worryingly, two-thirds of hydraulically braked trailers failed to meet the 25% minimum standard and a quarter had no brakes at all.

We put BAGMA’s trailer braking suggestions to the test earlier in the year and got some pretty good results. After publishing the article we were approached by a farmer and an agricultural engineer who wanted to share their experiences of brake upgrades. Click on the tabs to see what they had to say.

Given the palaver of stripping out the underneath of your trailer and welding new rams and pipework on, new axles might be the easiest and cheapest option.

That’s what Paul Nixon, a contractor of 1,618ha of grass and wholecrop near Selkirk, in the Scottish Borders, opted to do.

Having decided that his fleet of five mixed-brand trailers weren’t up to ferrying silage and grain hundreds of miles each year, he decided they were due a change. All had bog-standard ag-spec brakes – nowhere near adequate to cope with the force of stopping and starting in his Fastrac 3220.

But his fleet – two Griffiths, two Westerns and a Fraser trailer – were valued at just £2,000 apiece.

With a spanking new one carrying a £20,000 price tag, he felt his money was better spent in the workshop so set about following BAGMA’s recommendations.

“First we tried upping rams from 25mm to 35mm and pipework from 1/4in to 1/2in. But it took five minutes for the force of the rams to rip the glued-on brake linings straight off the shoes,” says Mr Nixon. 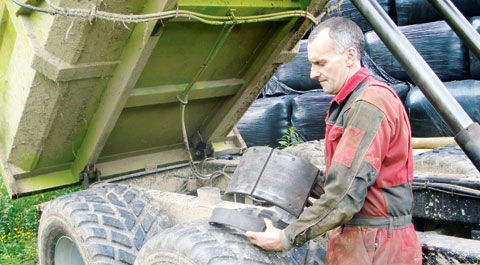 “Commercial shoes are far better because the linings are riveted on. The extra force of the new rams and pipework also sheared the bolts clamping the split end of the lever arm tight to the drum’s splined camshaft after one trial run,” he says.

To overcome this problem, Mr Nixon has juggled pipework sizes to get the right quantity of oil to the rams.

That’s meant a run of 3/8in pipework from the tractor’s back-end to the distribution head. From there, 1/4in tube limits the quantity of oil and force reaching the ram.

He’s also opted for top-spec 420x180mm shoes, which should stand up to the heat and force caused by the upgraded gear. A complete air and oil braking kit from specialist Erentek cost £700 and included the pipework and load-sensing valve.

The final job was the small matter of 12 gallons of paint for each trailer. A local contractor carried out the sand-blasting and painting work.

In total the upgrade cost less than £7,000 a trailer – pricey but far cheaper than the £18,000 Mr Nixon would have had to shell out for a replacement trailer. In doing the work he should also have at least quadrupled the second-hand value of the trailers, too.

Embarking on a winter workshop mission to up the spec of your trailer brakes seems a logical way to spend the quiet months, particularly given the massive price hike of ag trailers over the past few years.

But Kenny Paterson, a self-employed mechanic at Melrose in the Scottish Borders, reckons that some trailer undercarriages should be left well alone.

“If you want to travel at high speed then you should buy a trailer that is capable of doing just that.

“Brakes might have come a long way from the cable-and-rod setup operated from the tractor cab in the 60s, but they aren’t as good as they should be,” says Mr Paterson, who has come across several serious incidents caused by tampering with the running gear.

“Older trailers are not built to travel at high speed, so up-speccing rams or pipework will just put pressure on weaker parts of the trailer that have not been upgraded,” he says.

A prime example is the mounting U-bolts holding the springs and bogeys to the trailer. “I’ve seen axles ripped off, mounting bolts snapped and brakeshaft splines sheared because of a heavy foot on the brake,” he says.

“If that doesn’t happen then there will be a massive hit on hubs that are not designed for that sort of brake force – the linings of narrow shoes and small drums may just fall off because of the heat.

“So simply mounting a more chunky ram and wider brake hoses is not the answer.”

BAGMA’s decelerometer – a box that sits in the cab to measure how quickly the load slows down – is one method.

“The test takes more account of the effectiveness of the tyre stopping on the road than how efficiently the shoe is working in the drum,” says Mr Paterson.

In two BAGMA tests, the trailer achieved just 12.9% and 12.3% brake efficiency. So Mr Paterson headed to the local VOSA test centre where it achieved an impressive 32% on a rolling road.

His experiences with a Linton dump trailer proved that the testing system is long overdue some standardisation.

Having little or no braking ability on the trailer behind isn’t just sketchy on the road.

It’s probably fair to say that tractor brakes haven’t changed too much since the first disc brakes of the 70s.

But tractor speeds have doubled and the big wheels sported by some machinery can put enormous torque forces on the axles.

Mr Nixon is conscious of the damage that awful trailer brakes can cause in the back-end of tractors.

Iron filings from shot brakes can spread like wildfire up through the tractor’s transmission and wind up in a £7,000 back-end rebuild bill.He noticed the work his Massey Ferguson’s disc brakes had been doing when he gave it a springtime service.

“It would be good practice to change discs every 1,000 hours,” he says. “It’s only an afternoon’s job to whip off the trumpet housing when changing the transmission oil. Spare discs cost about £160 each.”