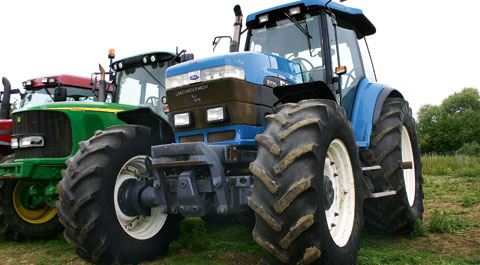 
If you’re after a big, heavy draft tractor the 70-series is a good bet – pound-for-pound it is difficult to beat. Its North American heritage means it’s got a strong export market back on its home turf. Bill Pepper, Cheffins

Truly iconic heavy draft tractors, Ford/New Holland 70-series combined a host of features to make them some of the most popular cultivations workhorses of all time.

Sold in the UK in both blue and terracotta colour-schemes, their strong reputation the other side of the pond means many have returned to their homeland.

The cab is the familiar NH narrow-fronted, but spacious unit and that, combined with the 8770’s short wheelbase and tall stance, really gives it presence.

A Basildon-built 7.5-litre Powerstar six-cylinder provides the muscle and transmits it to the ground via a 16F x 9R Funk powershift box – widely regarded as being one of the best on the market – when properly looked after.

When the back-end oil is changed on a regular basis the gearbox can run and run, but neglect it and the clutch-packs have a habit of seizing, with the net result that a complete transmission overhaul is in order at a cost of about £11,000.

It is possible to get into the tractor’s diagnostic computer to get an indication of powershift clutch-pack health.

Most were sold with the trademark tight-turning SuperSteer front axle, which, although it carries many more moving parts than the standard unit, rarely gives any trouble.

Engine-wise, look out for heavy smoke from the breather, which can be a sign that a piston has split. This can usually be attributed to over-heating, a scenario which is less common with intercooler-equipped models. Look out for those with charge-air coolers, as they tend to run longest without hotting-up.