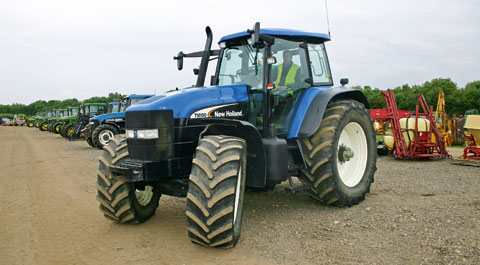 
Cheap horsepower, given the tractor’s age, but a reputation for reliability issues means people are wary of long-wheelbase TMs, hence the price. Bill Pepper, Cheffins

You won’t find any 200hp tractor of this age at this price. Why? Well, long-wheelbase TM175s and TM190s didn’t have the best reputation for reliability.

An insufficiently large oil-cooler meant the back end was prone to over-heating, with the net result that the sophisticated powershift transmission would go kaput.

All larger TMs should have been sorted with a larger oil-cooler under New Holland’s recall programme, but a few might have slipped through the net – it’s worth a call to the original dealer to check. (It’s the same story for Basildon-built Case IH MXM175s and MXM190s.)

Big TMs got a bad image, with the net result that they make a very cheap second-hand buy and, when they’re running right, they are strong performers.

When the electronically controlled power-boost kicks in, the TM190 can pump out between 220 and 230hp at the pto. That makes it a real pocket-rocket for jobs like mowing and power-harrowing.

Aside from gearbox mods, look out for upgrades to the electronically-governed radial fuel pump; earlier tractors were prone to throwing up error codes.

Bosch mechanical spool-valves could prove sticky and also needed modification, most of which should have been handled under warranty.

On that basis it is worth looking out for “Ultra” spec TMs, which gained electric spools, a 50kph box and beefier linkage stabilisers.

Although the PowerCommand gearbox was dogged with certain issues, not a lot went wrong mechanically. Powered range changes (between 6th and 7th and 12th and 13th) can be overly-harsh, but that can be sorted with recalibration from the dealer’s laptop. In some cases changing certain electrically controlled valves can also make a difference.

By the end of their production run in 2007, long-wheelbase TMs were some of the most reliable tractors Basildon had ever produced, says New Holland.