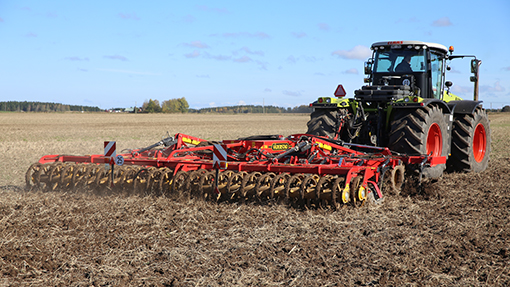 Vaderstad has rung the changes in its cultivator and drill line-ups. Oliver Mark rounds up the movers and shakers

Swedish manufacturer Vaderstad has added several models to its product list ready for the 2015 season, including a brand new, easier-to-pull cultivator.

The Opus is basically a simplified version of the popular Topdown, but without the added weight of the front discs. This trims horsepower demand below 50hp/m mark and should also mean its better able to deal with heaps of trash.

All the work is done by the three rows of hydraulic-reset-protected tines. Spaced at 27cm, these are capable of working from 10cm to 40cm deep, either mixing at shallower depths or busting pans further down.

Point and shin combinations can be picked to suit the job, ranging from the 3cm-wide low-disturbance leg to a fat-footed, 21cm mixing point. Vaderstads Marathon points can also be specced, which the company reckons can last up to 10 times longer.

Tail-end consolidation options include a standard 600mm steel packer to crunch clods and press the surface tightly, or the increasingly popular soil-on-soil packer. The latter uses a U-shaped profile to pick up soil, leaving a lighter finish in wet autumn conditions.

The Opus is currently only available in 6m and 7m widths, although it will also come in smaller sizes once Vaderstad has finished its rigorous testing process.

The Swedes have also updated the ever-popular Carrier cultivator to work deeper and chop through more surface trash than before.

New L and XL models come in four widths from 4.25m to 8.25m and are available with three front tool options a cross-cutting knife to chomp maize stubbles, shatter boards to beat up clods, or a straw harrow to distribute surface trash.

While the original Carrier used just 45cm discs, L versions now carry 51cm discs and bigger XL models come with 61cm discs. Framework is pretty much the same on the L and XL and the former can also be specced with the bigger discs, although you wont get the heavier-duty packer roller that is standard on the XL.

Interesting new features include four-stage adjustable disc angle, which changes the chopping ferocity of the discs. Wing pressure can also be adjusted on the two bigger models, and hydraulic suspension on the wheel carriage should take the thump out of road travel.

Vaderstad has been busy working on new shallow-working cultivation combinations which farmers can mount to a new Carrier frame, either new or old to get the better of blackgrass, slugs and other farming nemeses.

Combinations include the cross-cutting knife and shallow discs, a straw harrow in front of cross-cutting discs, or a combination of the two cross-cutters. The idea is to run over harvest stubbles twice the first to encourage weed seed chitting and a second run to wipe out newly germinated plants prior to drilling.

Working to just 3cm deep means power requirements are paltry and travel speeds can be up to 20kph.

Drill changes include a new seed-and-fert version of the Spirit. The Nordic variant differs from the existing strip-till and fixed versions in sowing seed in 12.5cm rows and dropping fertiliser behind a single disc opener between every second row.

<>And while the standard model includes front cultivating discs, the Nordic does without them, which brings tractor requirements down from 220hp to 175hp for a 6m version.

The company has also updated its best-selling drill, the Rapid, of which it has sold more than 22,000 units over the years.

Minor tweaks for next season include a hopper that has been shunted 10cm higher, hydraulics and electronics that are now protected by side shields on the hopper side and a few updates to the following harrow.

Control can now be via wi-fi to an iPad in the cab. The iPad then shows the run screen and adjustments can be made through it.

Vaderstads Swedish chum Alo has revealed a new model of the popular Versa-X range of front loaders for small-time 30hp to 60hp tractors. The X16 is part of what Alo has identified as a growing market.

It will lift up to 1,540kg from the ground and optional extras such as soft ride and a third function are pretty much the same as the bigger models. The loaders can be ordered in either Quicke or Trima branding.