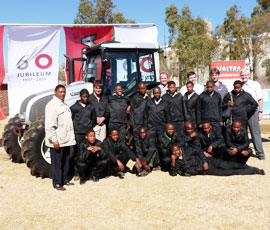 Finnish tractor manufacturer Valtra has donated a 101hp, A93 HiTech tractor to an agricultural school in South Africa.

The donation was partly funded by a Valtra initiative that began at last year’s Agritechnica event at Hanover, Germany. Visitors to the Valtra stand were invited to stamp their fingerprint on the tractor and 6,500 covered its bodywork in total.

The tractor was later sold to a Bavarian farmer for €70,000 at a German auction.

In early June, a new A93 was delivered to Weiveld School in South Africa, with the promise of service, training and spare parts support from Valtra.

The school offers agricultural-orientated courses to 600 students. It is free to attend and students can complete modules in tractor operation, maintenance and hydraulics, which previously relied on decades-old tractors.

The new A93 means students can look in more detail at how to calibrate sprayers and drills. It should give them a better chance of landing a job and improve the skills of the South African workforce, too, says Jari Rautjärvi, managing director of Valtra.

This move is part of a wider trend in African agriculture. The South African market is becoming increasingly important for European farm machinery manufacturers, who see it as a gateway to the millions of hectares of untouched arable land in sub-Saharan Africa.

Agco, which owns Massey Ferguson, Challenger, Fendt and Valtra, recently announced the opening of new offices in Cape Town. It already has a spare parts warehouse in Johannesburg, as it tries to increase its market share and the quality of service it can provide its customers.

• For more on farming in Africa, see our dedicated Africa Trip page