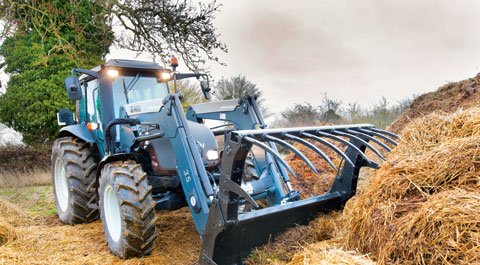 Valtra’s small A series tractors have gained features and sophistication, as David Cousins found when he tried an A93 Hitech.

Until this year, Valtra’s offering in the 75-100hp category consisted of the A72, A82 and A92 tractors. All good machines in their way, but hampered by the fact that they could only offer a clutched synchro shuttle.

So two higher-spec models were added to the line-up in early 2011, the 88hp A83 Hitech and the 102hp A93 Hitech. These came with a number of changes, including a proper powershuttle, electronic linkage and a button-operated hydraulically-controlled two-speed pto.

So have these changes turned the A Series into a fully modern small tractor with the features and versatility that farmers increasingly want? It’s taken a while to get our hands on an A93 but we borrowed one for day on a farm in Northamptonshire where there was lots of muck to shift.

The previous A92 had a four-cylinder engine, but the new A93 gets a three-cylinder 3,300cc unit made by fellow Finnish (and Agco) firm Sisu. It is a much more modern powerplant than the old one with electronic engine management that also allows it to have things like cruise control. It’s also a lot torquier than the old engine.

The changes made to the cab earlier in the year are subtle rather than revolutionary. The seat sits a bit higher and the floor is flatter and the new pendant pedals are nicer to use than the old ones. The cab is 60mm (2.2in) wider, too.

The new Proline dash gives you levels of information normally only found in bigger and pricier kit and allows you to scroll between average fuel consumption, distance travelled etc. You can also choose which display you want as your main (ie most prominent) one.

In fact the cab is full of features and well designed, but at the end of the day it’s still a small cab that may not suit those with claustrophobic tendencies.

Visibility is generally good but the standard Valtra hitch falls forward and so is pretty hard to see. However, Valtra UK says it will offer a Dromone extending hitch as a no-cost option which should improve things. The roof-mounted air-con restricts loader visibility a bit too.

Some interesting stuff here. There’s no handbrake, instead the transmission automatically applies the handbrake when the lever is in the centre position or when the engine is switched off. Once you slot the little lever into forward or reverse, the handbrake automatically releases– all foolproof stuff that won’t tax the brain or try your patience.

The new powershuttle seems well set up, too, with changes from forward to reverse neither too harsh nor too soft.

Though there’s no powershift as such, but Valtra has made it possible to change gear without using the clutch. There’s a button on the gear lever that does that for you and it does speed up the operation. However the range lever is still pretty reluctant to go where you want it to.

Traditionally this size of tractor would limit pto and 4wd engagement automation to a simple on-off. However the A93 allows you to set how high the linkage can go before the pto automatically stops. Four-wheel drive, meanwhile, can be programmed to activate only when the linkage is at working height or depth, which is helpful.

This is a tractor that packs a lot of features and systems into its diminutive frame and will certainly appeal to technology enthusiasts. The new powershuttle works well, too. However, despite getting an extra couple of inches of width earlier this year, the cab is still pretty small.