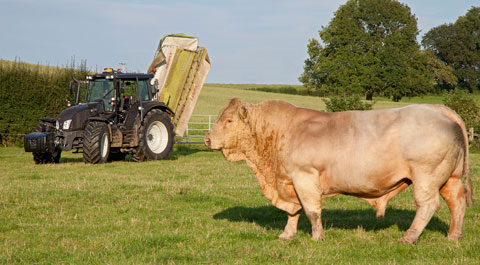 Capable of pumping out 171hp, the flagship in Valtra’s new N-series range is claimed to be the most powerful four-cylinder on the market. Nick Fone and David Cousins gave it a shake-down to see if it really is the ultimate all-rounder For years Valtra has pushed the boundaries of power and torque with four-cylinder engines from its Scandinavian sister company Sisu.

Back in 2003 the Finnish firm launched what it proclaimed to be the world’s most powerful four-cylinder tractor – the 147hp M150. But the M-series’ lifespan was to be cut short – it was competing for favour with at least three other models in the Valtra line-up and was the most expensive by a fair stretch. Three years down the line it was elbowed out by the N-series (along with two other models in the range).

And now, driven inevitably by meaner, greener emissions rules, that 90-150hp line-up has undergone a revamp with the top-end N163 flagship once more staking its claim as the pokiest four-pot on the market.


With exception of these two little ‘uns, all now have AdBlue urea exhaust gas after-treatment. And, because there’s no exhaust being siphoned back into the intake, the Finnish firm says it can get more out of its motors.

In fact the company makes the bold claim that as well as extra torque and power adding to overall muscle, fuel usage should be slashed by up to 10%. (AdBlue usage is believed to be about 5% of fuel consumption – that should mean one fill-up for every two tanks of diesel).

That’s apparently all down to the common-rail fuel system running at an eye-watering 18,00bar (26,100psi) and splitting each injection down into five carefully-timed squirts.

We didn’t have the chance to get the tractor on the dyno but a 3.5m mower-conditioner on some banky old permanent pasture did it’s best to drag the engine down. Running at a pace that left the air-seat working hard to keep up and the driver suspended in mid air much of the time, we just about managed to knock a few revs off the punchy power-plant.

But even deliberately pulling back on the throttle does little to make the motor grunt and when you finally get it down towards the 1,000rpm mark it hangs on like a starved squirrel in a nut tree. You would expect a four-cylinder to struggle with low-end grunt but we failed to make it really squirm.

Our test tractor was equipped with Valtra’s own stepless CVT gearbox (although 5-speed powershift and manual stick-shifters are also on the options list).

It’s simple to get going although you’ll need a few night’s bed-time reading to master all the tricks.

Ram the speed-limiter slider on the side of the arm-rest (easily mistaken for a hand-throttle) right forward and you’ve set the box to run up to full whack (50kph). Then a gentle dab of the gas pedal sets things moving.

A well-hidden button on the underside of the armrest flicks between four different speed ranges – 0-9kph, 0-18kph, 0-27kph and 0-50kph. In effect this just alters the sensitivity of the pedal. Stomp on it in A range and the tractor will pull away in a genteel, sedate manner. Do the same in D and you’ll end up in a neck brace for the next three weeks.

That’s not entirely fair. This is probably as smooth, if not more so, than any stepless gearbox on the market – we really rate the Finn’s homegrown CVT.

It has three modes:

Full Auto: the throttle pedal measures out appropriate doses of engine revs and alters transmission ratio accordingly. This “pedal” mode is how we’d run the tractor for most jobs.

Semi-auto: the armrest slider is used in combination with the foot throttle. While keeping your foot on the gas maintains forward momentum, dragging the stick back ups engine revs to allow the driver to pre-empt upcoming hills or tough spots.

Manual: effectively “stick” mode, revs are handled by the gas pedal or twiddly hand-throttle dial and then forward speed is varied with the arm-rest slider. Ideal for pto work where engine revs need to be kept constant.

Useful features but in typical Valtra style they’ve hidden their light under the proverbial bushel. A clearly labelled rocker-switch flicks between Auto and Semi-auto but to get into Manual requires a visit to the computer terminal. And, the only indicator to tell you which mode you’re in is a “1” or “2” on the display so it really isn’t clear what’s what.

Alongside this rocker-switch is another more clearly labelled one which provides three different levels of engine braking – a useful touch.

And sharing the same bit of real-estate on the main console are two dials. One for droop, biasing the transmission towards power or economy (effectively setting the point at which ratios alter according to load). The other alters reverse speeds in proportion to forward pace.

Anyone that has ever set foot in a Valtra cab will realise that very little has changed. It’s got that function-over-form, slightly dated feel but is plenty roomy enough. It would easily accommodate a brace of collies and several fathoms-worth of baler twine.

However the seat is set too far forward for our liking, making a fiddly little mirror dangling from the back window the only way to view the hitch.It’s up on the arm-rest that things have changed. There’s now a colour-screen that deals mainly with hydraulics and automated headland turns.

It’s a massive improvement on what went before. Everything is much clearer and the menus are simpler to fathom (although it’s still trickier than Deere and Fendt’s latest touch-screens).

Spool timing and flow are set by twiddling a dial in the appropriate menu although there is a quick access knob that will alter oil-flow across the board.The U-Pilot headland management system now remembers sequences for up to 64 different implements when the ignition is switched off and can be set up stationary or on the move with the option to edit at any point.

The N163 is an impressive performer, especially when kitted out with a CVT gearbox. It’s got loads of clever features but suffers from the age-old Valtra issue of playing hard to get. Those clever gadgets are so well hidden that they’ll rarely get used.

Ride comfort and handling are second to none. The front axle and cab suspension work so well together that even when we abruptly dropped out of sight in a badger sett heads didn’t clatter the ceiling and the tractor continued on, feathers unruffled.

As to whether to buy this eager-to-please four-cylinder or an equivalently-powered (but potentially torquier) six-pot, the jury is still out. If you want a lively, compact and lightweight pocket-rocket that’s as nimble as a mountain goat then the N163’s a good bet. Hang a loader on the nose and even Jess Ennis would struggle to beat it for its ability to do just about anything.