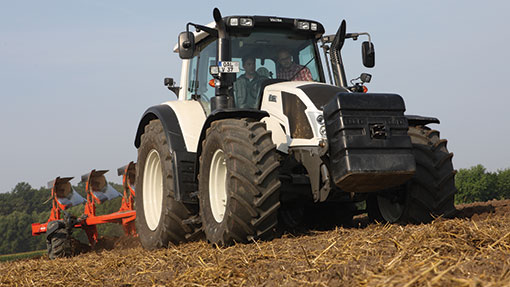 It’s the same old story with the Valtra – good test scores were let down by substandard ergonomics and an outdated cab. But once you work out how to use it you can get a lot of tractor for your money Base price: £81,321

Valtra’s six-pillar cab is now 13 years old and long due a spruce-up. It’s well proportioned and good-looking from the outside, but it’s once you get inside that things take a turn for the worse.

The interior is dressed in grey plastics and, unlike well-finished rivals such as Deere and Fendt, there’s little in the way of luxury.

The cabin was the narrowest of the tested tractors’, but also one of the longest. That awkward, cricket-pitch shape means it’s a bit of a squeeze for a passenger on the shelf-like second seat, which is backless, strapless and short of cushioning.

Storage space is also limited, and the slope of the cab floor means stashing stuff on the rubber mat won’t really work.

Access is pretty easy, though – the Valtra’s cab sits low and the steering wheel folds up with a push of the central pedal. Implement monitors can be mounted on the two rails either side of the B-pillar and there are a good number of sockets available nearby, too.

The cab cooling system hangs in the roof and limits headroom but the view forwards is generally good. The low seating position, high fenders and girthy pillars don’t help sidewards visibility, but to the back it’s decent.

Like Deere, Valtra steers clear of using a multifunction joystick. The colour screen is also Deere-like in its size and was the smallest one tested. It takes an age to load up and is navigated by arrow-labelled blister buttons.

It’s easy to lose your way around the monitor if you don’t know where you’re going. But if you do work out what’s what then there’s lots of adjustment for the transmission, hydraulics and headland management. We’ve criticised the Finns’ ergonomics plenty of times before but, in reality, you’ll learn to live with them in time.

At 72dBa the cab was a quiet place to be even with the engine pushed hard. The oil-cooled brakes were precise, if a little delayed.

The Valtra’s Agco Power engine regularly performs well in the DLG tests. This year was no different and it proved to be the most powerful – with boost it churned out a maximum 165hp at the pto.

It was frugal, too, recording a better-than-average 234g/kWh specific consumption. Add AdBlue to the equation and total consumption climbed to 239g/kWh, which was the second best on test.

There was more good news for the Finns in the six-point partial load test, where the Valtra’s specific consumption tallied 262g/kWh (including AdBlue). The group average was up at 269g/kWh.

There are two engine speed memories but their layout can be confusing. One is planted on the armrest and is labelled Cruise 1, while the second is on the side console and is labelled M2. Pressing and holding records an engine speed, or you can thumb a side console rocker to fine-tune things, although Valtra has since swapped the two rockers for a single push-button.

The gangly hand throttle stalk runs underneath the armrest rail, which should guarantee it doesn’t get knocked or pushed accidentally.

Valtra’s Versu gearbox uses four ranges and five speeds to make for 20 speeds in both directions, or 30 if you spec the creeper.

Hare/tortoise buttons on the armrest bounce up and down the powershift steps. The same buttons are used to switch ranges (while holding a hidden armrest button), but the process would be near impossible to work out if you were driving the tractor for the first time.

Powershifts and ranges change pretty smoothly and we found the speeds well matched. In total there were nine speeds spanning the working range from 4-12kph.

The DLG’s draft test saw the Valtra put 137hp to the ground. Specific consumption (including AdBlue) reached 272g/kWh, which put the Valtra above the group average.

Settable features include the starting range, which can be altered through a complicated combination of button holding.

Points of the powershift can also be adjusted. There are two modes – Auto 1 is a factory setting and shifts speeds according to load sensing and the angle of the accelerator, but we found it too late upshifting and too slow downshifting. Auto 2 is adjustable via the screen.

There are also two cruise speeds. These can be recorded while you’re on the move then fine-tuned using the rocker on the side panel. Cruise 1 is positioned on the armrest and Cruise 2 on the side console.

One handy feature that set the Valtra apart from the other non-CVT tractors was the auto-traction function. Thwack the N Auto button, and you’ll be able to jump on the brake without declutching. It’s active up to 20kph and goes into standby mode above that.

Valtra’s stumpy shuttle is one of the best on the market and comes with a collar-protected park position. Its severity can be adjusted from 1-10 and you can also adjust the severity of clutch engagement in four stages.

An armrest switch engages four-wheel drive (or automatically according to wheel angle and switch position), while diff-lock controls are on the side console. The latter automatically switches on/off when the speed difference between front and rear wheels goes above 12% or below 8%.

Our N-series had a better-than-average 7.1t lift capacity but, again, control labelling is a little erratic.

The quick-lift rocker is labelled Auto Control and there are raise/lower inching controls on the side console for coupling.

Our test machine had four double-acting and proportional spools at the back, as well as one up front. Two are controlled on the armrest cross-lever, another two on awkwardly positioned paddles and a last one on the side console.

However outside, the spools are split either side of the top link, which can make things awkward when coupling up.

Spool settings are available in the monitor and through two rotary push-knobs. The first knob decides what the cross-lever will control – front-only valves, rear only, or a combination of the two.

The second knob has more features – quick adjustment/preset flows for each valve (either 10%, 50% or 100%) and adjustment of time and flow in both directions. You can thumb a central button to lock the valves quickly and it’s also possible to set a travel speed at which the hydraulics are locked.

Up to 168 litres/min was available at two valves and the flow rate at each valve will reach 93 litres. The Valtra’s removable oil of 47 litres isn’t stingy, either.

One of the Valtra’s biggest spec sheet disadvantages is that it only offers two speeds (picked from 540, 540e, 1,000). The mechanical lever to switch between the two is very heavy but pto start aggressiveness can be tweaked in the terminal.

The switch is planted near the hand throttle on the armrest side and the middle position allows it to be fired up from the fenders. Another update means the tractor will now automatically start and stop the pto, too.