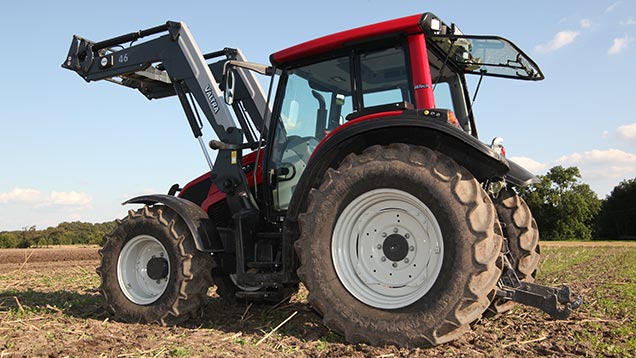 A new cab is on the horizon for the N-series but, for now, Valtra’s vintage six-poster is well suited to this power class. In fact, it’s the polar opposite of the John Deere by offering heaps of space and good views behind a small, sloping bonnet.

However, the low seat position, high fenders and lack of a roof window do the visibility around the rest of the tractor no favours, and low-hanging roof vents result in the worst loader views of all the tractors.

The Finn’s switchgear is also predictably poor, with transmission settings buried deep within the computer. Four switches are badged “auto”, which does nothing to help decipher things.

On a brighter note, it was the quietest tractor on test, so at least you can hold a civilised conversation, though passengers will be less chirpy about the fold-down board for a second seat.

Three-cylinder tractors have been a difficult sell for Valtra on the 100hp market. Its Finnish-made Sisu block is rated to 95hp, which puts it level with the Deutz at the bottom of the power rankings.

Given the shortage of cylinders, we expected the three-pot set-up to be a frugal worker. However, it surprised us by slurping 296g/kWh from the diesel tank at max power – the worst on test.

If that wasn’t enough, the Valtra pumped out just 60hp at its most fuel efficient, which meant it was beaten comfortably by the Case and Kubota at 84hp and 82hp respectively.

Valtra’s Hi-tech 5 transmission is an advanced set-up for tractors of this size. It houses four ranges and five speeds (20×20) and is controlled through a rigid, walking-stick-shaped handgrip.

Unlike most of its test rivals, the gearbox has two automatic functions. The first fires through the powershifts (and between ranges C and D) according to factory-set boundaries of engine load.

The operator can set the shift points of the second, though you’ll need the handbook in one hand and a whisky in the other to work out how. You can also adjust starting gear and clutch biting point in the bowels of the computer.

The well-specced N-series also has a clutchless braking system that will bring the tractor to a halt without having to dip the clutch. It was useful on the road, but for inch-perfect stacking of bales and boxes it’s probably better to stick with the clutch pedal.

Being the longest, tallest and heaviest on test gives the Valtra big advantages in ride comfort and, at 5t, it’s only got the Deere for company in its weight division. If you’re after a field work tractor then those factors work in its favour, but small sheds might be less practical.

Four-wheel drive and diff-lock are activated through multistage switches, with the latter knocked out once the linkage is lifted or the wheel is turned.

The Finn is Ox-strong at the back, with a top-of-the-charts average lift of 5.2t – well above the 4.7t standard – and linkage damping and turnbuckle adjustment on both arms.

Hydraulic equipment is pretty basic, with up to four spool levers running in channels perpendicular to the operator’s arm, making it awkward for all but the most cack-handed drivers.

The higher-spec gear pump will push out 93 litres/min, which was second best in test behind the John Deere. The flow of one valve can be controlled by an arm-aching nine turns of a clumsy, black-topped knob.

Like the Kubota, Valtra can only offer two pto speeds selected by a long cab lever. There’s an automatic function, too, which switches the pto off two seconds after the link arms have been lifted. However, it won’t switch the pto back on again – you’ll have to do it yourself.

Fellow Scandinavian company Alo provides a heavy-duty loader, but its big frame and mounting brackets do nothing to improve the Valtra’s already poor visibility.

On our test model there was no quick-coupling for the pipework, either, and the joystick is quite obviously a retrofit. However, loader cycle times were pretty much the best throughout.

Valtra’s Hitech gearbox is about as good as it gets on the 100hp tractor market. It was a big, strong machine, but was let down by a surprisingly thirsty three-cylinder engine.