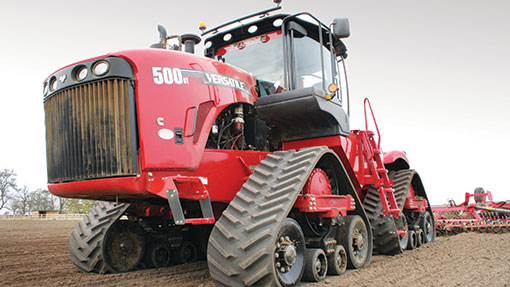 With its new Delta Track articulated tractors, Canadian maker Versatile is keen to grab a share of the UK tracklayer market. Importer JPM claims to have already sold two machines and is running UK-wide demonstrations this season with the target of shifting five by the end of the year and doubling that in 2015.

Those are bold claims, especially with the main players already firmly established in a relatively small market.

In total there are between 180-190 tracked tractors sold in the UK each year, according to the Agricultural Engineers Association. With its 335-600hp MT700 and MT800 ranges, Challenger has the biggest slice of the cake, retailing about 100 units/year. Deere follows that with an estimated 50-60 of its 8000- and 9000-series twin-track crawlers sold each season.

Finally Case IH comes in with its artic-steer Quadtrac, shifting between 25-30 of these heavyweight prime movers a year. It’s clearly these time-proven four-track machines that the new Versatile will come head-to-head with.

While that price gap may appear cavernous, there will be certain unknowns for potential Delta Track buyers, prime among them being service back-up and resale values.

As yet Versatile does not offer a linkage or pto but we’re told the former is on its way, as are fold-in steps and a universal steering valve compatible with all the major European GPS systems.