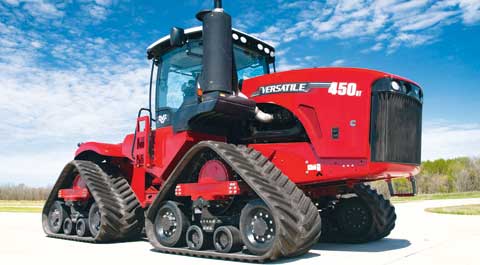 Versatile has had a chequered history. The past 20-or-so years have proved turbulent, with paintwork changing colour with chameleon-like frequency and ownership swapping hands multiple times (see “A potted history of Versatile”).

The most recent change saw the Versatile name – renowned by North Americans for simple and serviceable high-horsepower units – return in 2008. It means the largely Russian-owned kit builder has a fresh-faced product line having unveiled an almost entirely new set of machines in the last five years.

The most recent to join the party is the Delta Track – a three model range that is still in the pre-production phase and was officially launched at Canada’s Farm Progress Show in June.

The need for the big kit is obvious – frosts hit by 15 October and by 1 November the snow will have buried the ground and that’s pretty much the last time you’ll see terra firma until March.

Winnipeg is the home of several heavyweight manufacturers including Versatile tractors – a once legendary name in the world of high-horsepower metalwork. Swather and Draper header specialist MacDon also calls Winnipeg home.

Versatile isn’t short of competition on the prairie monster market, with John Deere, Case, New Holland and Challenger all eying up a decent slice of the pie. Unsurprisingly, Deere bosses the Canadian sales figures (40%), followed by Case (25%). Versatile makes do with about 10%.

WILL WE SEE IT IN THE UK?

Buhler Versatile machines have been brought into the UK in small numbers over the past 10 years by Glocs-based articulated tractor specialist Midwest Machinery. This has been hampered recently by unfavourable exchange rates and a lack of CE approval but it is hoped that with the new four-track system, the Canadian machines will become a more attractive proposition to UK operators, making type approval a viable option for the company.

It’s unlikely to require too many changes to the tractor, but Versatile has to weigh up whether the cost of gaining the approval is worth it. Full production for the North American market starts this autumn.

WHAT ELSE DOES VERSATILE DO?

Sprayers – Versatile has built a self-propelled sprayer in its Minnesota factory since 2009. It has a rear-mounted 36m boom (front-mounted booms are increasing in popularity the other side of the pond), which is made by a familiar name in Rutland-based Knight Farm Machinery.

Combines – Since the tie-up with Rostelmash Versatile has had a Cummins-powered rotary combine on its books. It uses plenty of familiar European parts including a Claas drive system and Bosch Rexroth hydraulics. Headers are built by MacDon and Versatile adds four-wheel drive systems to almost 75% of the combines it sells. The combines use a novel threshing system, which sees the concave cage rotate at 8rpm to improve the threshing and minimise grain losses.

Things are the same as its wheeled sibling in the power department. Cummins provides a 15-litre, Stage 3b unit for the North American and eastern European markets, which is tuned to 450hp, 500hp or 550hp depending on the model. For developing countries Versatile still has the 2375 in its ranks – it has a Tier 3 engine which is better able to cope with the varying sulphur contents and fuel qualities in South America and Africa.

Because Versatile buyers prefer simple set-ups the company decided against experimenting with AdBlue to meet emissions standards, meaning out-in-the-sticks North American owners only need to worry about a one liquid top-up. Like the John Deere, it uses a particulate filter to deal with exhaust nasties (although, like Deere, AdBlue will be necessary to meet Tier 4 final).

The transmission is also a prairie farmer favourite – a 25-speed Caterpillar powershift (16 forward, 9 reverse). While owners of older Versatiles still need convincing that there’s more to the world than a manual transmission and big gear stick, powershifts are increasingly popular in this neck of the woods.

Power is put the ground through Canadian-made 30in or 36in Camoplast tracks. The 30in set looks set to be the big seller because it’s cheaper and more practical on the road (despite there being no road width limits for farmers out here). The wide boys add about $15,000 (almost £10,000) to the ticket price.

Opting for tracks has obvious traction and compaction benefits. Versatile reckons track slip will reach 3% at most, compared with 10% for wheeled equivalents. Spreading the 27t weight is also important, particularly given that it weighs almost 2.3t (an extra Land Rover Discovery) more than the Quadtrac. The fuel tank is positioned centrally on the machine, which should help spread weight and, as the engine drinks the juice, the spread of weight across the tractor remains the same.

The penalty for opting for a tracked unit is top speed. The Delta Track is limited to 35kph because tarmac wears out the rubber and high speeds cause the idler wheels to get very hot. 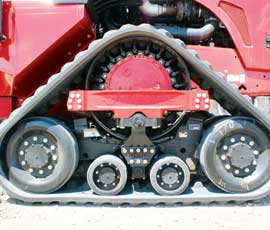 But in the field Versatile reckons the tracks will outlive Quadtrac equivalents by 25%. The Camoplast design makes use of two (rather than the Quadtrac’s three) mid rollers. It means the rollers line up either side of the axle to try and avoid vibrations firing through the axle and up into the cab. There’s no cab suspension on offer, though.

Most tracked units earn their keep (in this part of the world, at least) pulling tillage trains and seeders at about 12kph.

A drawbar is currently the option on the Delta Track’s tail. A pto is in the pipeline for production models and there’s a good chance there’ll be a three-point hitch option, too.

Long hours in the saddle during busy periods means automatic features remain important, even if they’re not top of buyers’ criteria list.

The tractor has a cruise mode – either set according to engine speed or ground speed – and diff-lock front and rear, but this must be operator-engaged each time. There’s one engine speed pre-set, too, which means you can’t set a headland engine speed to save fuel and noise. There are also eight recordable (but not adjustable) headland modes and Raven guidance is a factory fit option.

Versatile’s cab is the penthouse suite of tractor cabs – the largest on the market according to the company.

It might not be quite as plush as the Quadtrac, but everything falls to hand. Gearing is controlled through a forward/reverse stick housing powershift buttons on its flank. It is possible to preset the forward speed, but as soon as the operator dabs a toe on the inching (clutch) pedal, the default starting gear returns to five. 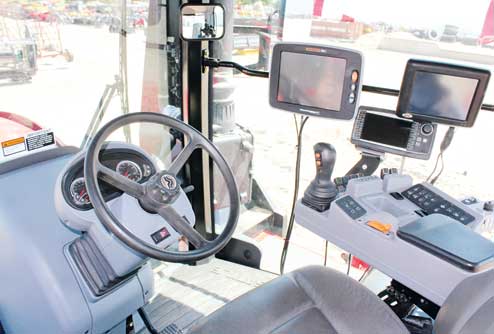 You can also set the transmission to skip either one, two or three speeds when it up-shifts which should be handy on the road, but there’s no way of varying the shift point in auto mode to make it more economical on the road.

Visibility is generally good. The operator can get a look at the hitch from the seat and sidewards views are good except for the control boxes and bulky stack/particulate filter.

Versatile sells itself on serviceability so it’s no surprise that all the important parts are almost as get-to-able as a 70hp scraper tractor.

The front grille opens wide to reveal an equally wide-opening radiator pack and the big red hood swings sidewards for access to the filter and engine bay. Further back there are centralised grease points to make life easier with the grease gun.