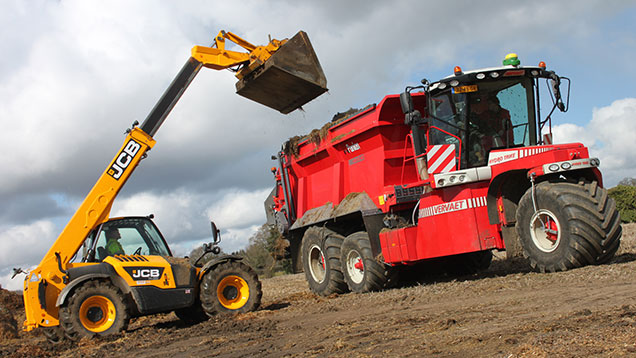 Until now, the specialist self-propelled spreader sector has largely been the preserve of Agco’s Challenger three- and five-wheeled Terragators, plus Vredo’s VT and Claas’s Xerion.

But with Terragator production at its Dutch factory due to stop, Vervaet’s UK importer, J Riley Agri, reckons it has a machine capable of offering contractors an alternative.

The Hydro-Trike is the newest incarnation of a machine that was first launched in 1990.

Available in five- and three-wheel formats, the leading rear axle uses smaller wheels (750/50 R26 tyres) than the beam that follows it, which is shod with 1000/50 R32 rubber.

The mid-axle is also hydraulically raised and lowered according to the weight it is carrying, and the wheels steer in conjunction with their companion up front.

The other neat trick of the mid-axle is that it is extendible, so it can bring its wheels outside the paths of the rears.

Controllable by cab floor pedals, this spreads the weight of the machine over five separate wheel paths that cover the full width of the machine, also aiding stability.

A DAF six-cyl engine produces a maximum 465hp down at 1,400rpm, putting its power through a hydro-mechanical transmission to the front and rearmost wheels. An auto-inflation system allows tyre pressures to be lowered to 1.5 bar, or as low as 0.5 bar for umbilical slurry injection.