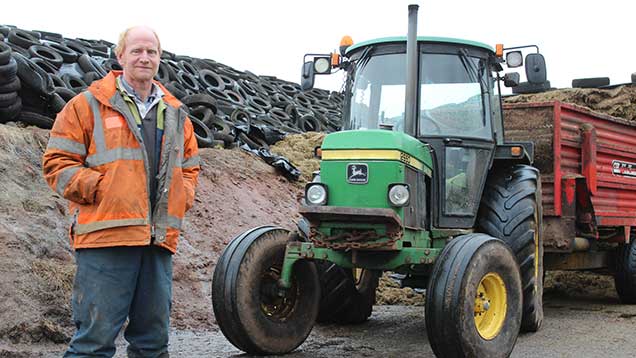 The youngest member of Jock Graham’s mixed farm tractor fleet is 24 years old and his three frontline tractors have together tallied over 50,000 hours. The hardest-worked of those is a veteran John Deere 2650, which has breached the 23,000-hour mark.

We were in need of a couple of tractors and our local John Deere dealer at the time – Snowden’s in Carlisle – offered a cracking deal on an 80hp, two-wheel drive 2650. We paid about £8,000 for it back in 1987, which has proved to be a real bargain. It was modern for its time and still looks pretty smart now.

These days it mainly tugs the Schuitemaker feeder wagon, but also does the spraying and hedgecutting across the farm. We make 2,000 conventional bales each year, so it occasionally does a shift on the baler, too. It’s not really cut out for haulage jobs though – we leave that to the bigger tractors.

It’s hard to believe, but the 2650 is only on its second set of tyres in 25 years. They’ll probably need replacing soon but the tractor is only used in the yard – there’s certainly no heavy draft or road work – so tread isn’t particularly important.

We take care of all the tractors – you have to if you run old kit. All the servicing is done on the farm and we sort 95% of breakdowns ourselves as well.

The 2650 has hardly put a foot wrong over the years. Since 1987 it’s had a new steering pump and the odd spool valve repair. The track rods have also been replaced – it’s still got the same steering rams but everything else, including kingpins, were swapped for new ones.

We usually have to replace the clutch every 10,000 hours, so we’ve put in a couple – it comes with the territory when you’re shunting about in the yard all day. It’s not a major job, anyway – we can lift off the cab and split the tractor in an afternoon.

We’ve had no trouble from the 3.9-litre Deere engine, though – it’s been as reliable as anything I’ve known. Hi-Lo splitters have an iffy reputation on tractors of this vintage, but so far we haven’t had any grief from them, either.

It’s still in pretty good nick. The rear mudguards could do with a lick of paint and some of the upholstery has come away from the metalwork behind the driver’s seat, but it’s generally in a pretty respectable state given the age.

It’s good value for money. Tractors are really expensive these days and, if you’re happy to put in the time servicing and fixing them yourself, there’s no reason why you shouldn’t run old machinery in a system like ours.

We’d never sell the 2650. The 3050 is more likely to get swapped if it continues to cost a load of money to keep going. I wouldn’t mind replacing it with an old 6910, but that depends on whether First Milk keeps paying out.

The H-reg (1990) 3050 is a more recent addition to Mr Graham’s vintage stable and has now clocked 15,367 hours. It arrived for £6,000 seven years ago from Frank Johnston Tractors in Carlisle, re-upholstered and with a fresh pair of mudguards over the front wheels.

However, it’s been a bit more troublesome than the 2650, partly because it is responsible for the farm’s 30ha of ploughing, slurry spreading, drilling and other draft work on heavy Dumfriesshire land. Last year it cost about £2,000 to keep running.

Like the 2650, it had a new steering pump and two new clutches, though that has been in the space of just seven years. It has also has a new cog selector because it kept hopping out of second gear.

In the engine department it has had a new flywheel and the rocker shaft needed replacing when all the tappets came slack.

If you’re running a high-houred tractor, then we’d love to hear from you. Just email a few details and your phone number to oliver.mark@markallengroup.com