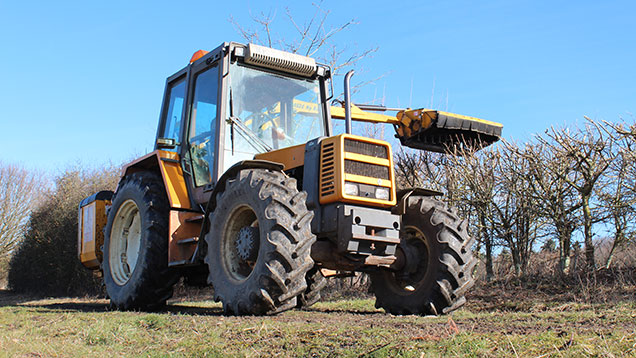 It has been more than 10 years since Renault tractors were phased out, but there are still a few orange-liveried veterans kicking about on UK farms. Oliver Mark visits one that’s clocked more than 21,000 hours.

Hampshire farmer Quentin Jacob has run several Renault tractors over the past 30 years, but the only one to stand the test of time is his 84hp 95.14.

My father bought it new in 1986 from the now defunct Tristram Tractors near Odiham. At the time, Renault tractors offered better value for money than anything else on the market.

We paid about £18,500 for the little 95.14, which was cheap considering it had a forward/reverse shuttle – a novelty at the time.

However, the first day I drove it I hated it. The cab had levers everywhere and it felt second grade compared with our Massey Ferguson 690, but after driving it for a week I had completely changed my mind.

It pulled like a train in the field and made the 690 look totally gutless.

Early on it was our frontline tractor and did all the ploughing and drilling across 100ha. When I had it working really hard it would throw a flame out of the top of the exhaust.

It also used to bale and wrap about 6,000 bales each year for all the local council farms, but it’s slowly been downgraded and now just does the hedgecutting and hay turning. It would still do a proper day’s work if I needed it to, though.

It’s brilliant. It will comfortably do 10ha on the 33gal diesel tank during tillage work, which I still don’t think many modern tractors could compete with.

The MWM engine was always destined for a long life because its long stroke keeps revs low. It’s got so much pulling power for its size – you can drop the plough into the ground on tickover and still get it moving.

It’s on its third set, though they’ve still got 70% left. When I was young and enthusiastic I did loads of work with it on other local farms so wore down the rubber fairly quickly, but it’s in semi-retirement now.

To be honest, it’s not serviced as often as it should be. I used to drop the oil every 300 hours (the manual says it should be a 200-hour interval) but modern oils are so much better than they were 30 years ago that I’ve always thought I could get away with it.

It used to live in the shed but I’ve not got enough space so it has been relegated to the yard.

The paintwork is still good, though it helps that the wings and front cowling are plastic so they’re more likely to melt than rot.

Despite all the hard work it’s done it has never had any engine or hydraulic problems and it hasn’t seen a dealership since the day we bought it – I’ve always done all the servicing myself.

In 29 years it has had three clutches, but with no clutter around the engine I can have the tractor split in two-and-a-half hours. It’s also had a couple of alternators, brakes and I had to send the fuel pump to be reconditioned two years ago, which cost £450.

Is it showing its age?

From the outside it’s still a pretty smart tractor, though the cab could do with some love. The seat is original, so after 21,000 hours it’s well sculpted to my backside but not as comfortable as it used to be.

The steering column bearing is also shot so the wheel flops about. I’ve replaced it once before – it’s caused by people (mainly me) pulling themselves into the cab by the wheel.

However, you can still get all the spares off the shelf and they’re not as expensive as you might expect.

Do you own a high-hours hero?

We are resurrecting our series looking at tractors that have clocked particularly high hours. If you’re running a high-houred machine then you could feature in Farmers Weekly – just email a few details to oliver.mark@markallengroup.com

I keep it partly for sentimental reasons because Dad bought it just before he died but it’s also unbeatable value for money, especially given the mad prices for new tractors these days and the sort of depreciation hit you have to take.

I think they’re also more reliable than the new tractors, it’s just a shame that MWM didn’t keep up with the engine emissions rules.

It’s far cheaper to service than my bigger Claas and Massey tractors as well. I can do a full service for £200 on the Renault, while the Massey costs closer to £1,000, so it makes sense to put the hours on the cheaper tractor.

What’s the secret to keeping it running so long?

To be honest, I’ve been quite lucky – the 95.14 was a particularly good model. I think that’s the trick – buy tractors that are simple, serviceable and built to last.

Never. It’s not worth selling – it’s probably only worth £5,500, so it will be on the farm as long as I am. I would say bury me in it, if the seat was more comfortable.