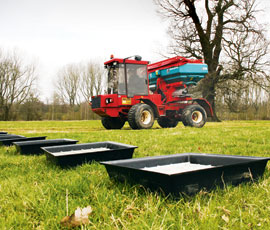 Farmers are in danger of wasting money and cutting potential grass yields by not checking the accuracy of their fertiliser spreaders. That’s the opinion of fertiliser makers and spreader testing companies alike.

“Only 36% of farmers tray-test the accuracy of their spreader each year. Even more worryingly, 30% never do any form of check,” according to Mark Tucker, head of agronomy at fertiliser maker Yara.

A third of farmers check only once a year, while a mere 5% think to check when they change fertiliser, he adds. “When you think that every £1 spent on fertiliser returns up to £2.77 in increased yield, it’s even more crucial to get things right. A grower can expect fertiliser to double yields on first-cut silage and triple yields on second cut – crucial when buying feed is going to prove increasingly expensive.

“Inaccurate spreading can cost about 0.16t/ha in terms of what is cut, which equates to £54/ha in equivalent milk yield potential,” warns Mr Tucker.

Staffordshire testing company SCS Spreader and Sprayer Testing checks about 2000 spreaders a year across the country, yet there are reckoned to be more than 25,000 spreaders on UK farms.

Each test starts off with a detailed examination of the machine itself, as was shown at a demonstration last week at the site for this year’s Grassland and Muck 2011 event at Stoneleigh Warwickshire.

“The first step is to check the true pto speed using a tachometer,” explains James Hammond from SCS. “Then we can tell the operator what pto speed the tractor needs to be set at for accurate spreading. It’s amazing what effect even being 20rpm out can have on spreading patterns, particularly at 24m or more.”

The most common problems are worn vanes or vanes that have holes in them, he adds. Once the general checks are complete, the spreader can be filled with fertiliser. “Even if you have used the fertiliser before, it’s important to do a test to see what the spreading qualities will be,” Mr Hammond explains. This involves weighing a sample, conducting a shake test and testing how much pressure it takes to break each granule. When the characteristics of the fertiliser have been identified, adjust the machine for the appropriate spreading width.

Trays are set out across the spreader width, then the spreader is driven across them. Fertiliser from each of the trays is then transferred into separate tubes and the contents are recorded, with the coefficient of variation calculated by measuring the variation in each tray from the average contents.

If the results of the first run are unsatisfactory, changes are made to the spreader settings and the process is carried out again until the correct setting is obtained.

“This test should be carried out for each type of fertiliser the operator intends to apply, as each has different spreading characteristics.