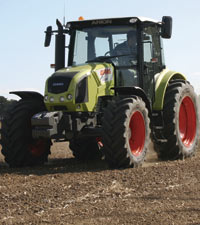 Claas has broadened its Arion range to offer three new models in the 100hp to 130hp bracket.

The four-cylinder 400 is based on the same frame as the older Ares, but adopts many of the features of its larger brother, the Arion 500, including a power boost on higher spec models – a somewhat unusual feature on this size of tractor.

The CIS versions boast a further 10hp power boost on all three models, meaning max power rises to 110hp, 120hp and 130hp. Unlike most powerboost systems, which operate only in transport or when the pto is engaged, the Arion’s kicks in at 6.5kph in range C, when the pto is engaged, if there’s a hydraulic requirement or if the viscous fan is running.

CIS tractors can also be fitted with the option of a Quadractiv powershift transmission, meaning operators can choose between manual or automatic electro-hydraulic range shifting, making it more akin to its CVT cousin, the CMatic.

A higher capacity hydraulic arrangement means 98 litres/min is on tap at the push of a button, with three separate pumps to direct oil flow to the different services. This is also an option on standard models, too.

For those aiming to do a lot of loader work, there’s an option of a multi-function joystick complete with gearshift controls which pretty much makes the standard gear lever redundant.