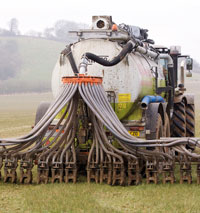 There are some pieces of kit you just can’t help but be impressed by, and the 16m long Claas Xerion 3800 Trac coupled to the Dutch-made Kaweco slurry injector is one of them.

Oxfordshire contractor Charlie Baker is the first in the UK to run the massive combination, first shown at Grassland and Muck last year.

Having taken delivery of the rig in October, Mr Baker hopes to have it back on duty as soon as possible after the closed period for slurry spreading ends on the 15 January, should the weather warm up a bit.

Though he isn’t selling the service on the back of NVZ legislation, the benefit in terms of nutrients is clear, he says. “Nutrients will vary greatly depending on surface water and conditions, but at a rough estimate it could translate to £7.50/cu m in benefits. But there’s no point in analysing it until you’re ready to start spreading to get an accurate picture.”

The 388hp Xerion is attached to the 24cu m Kaweco tanker via a swan-neck hitch, which transfers weight from the drawbar to just in front of the back axle. By doing this, Claas reckons about 9t of drawbar load is transferred to the Xerion.

And while the 16m overall length will overshadow other muckspreading combinations, the Xerion has a crab-steer function which spreads its footprint over a larger area, resulting in less compaction and allowing operators to start spreading sooner.

The unit comes with a 7.5m-wide injector with 40 trailing shoes, which apply slurry at a depth of 12-25mm, as well as a 15m dribble bar, for spreading in standing crops later in the year, and a splashplate.

The tanker takes just 2.5 minutes to fill, thanks to a dedicated filling pump and two 150mm intake pipes, pumping at a rate of 9cu m/min. A telescopic arm, which extends to 3.5m, means that most slurry stores can be easily accessed. “If the slurry lagoon is in the same field, the set-up can cope with up to six loads an hour,” says Charlie’s son and operator of the unit, Steven Baker.

Dosage rate depends on the nutrient analysis, he adds. “But in Holland they typically apply between 16 and 24cu m/ha.”

The tractor and injector are connected by a hydraulic PTO, and the 238 litres/min system puts out about 90kW, which is enough to power the tanker’s two pumps, one to load and one to spread and circulate within the tank.

Controls are through a Muller Isobus-compatible control terminal, which lists key data such as hectares covered, hectares capacity still in the tank, injection rate and injector pressure and depth.

“Because the tanker is split into three compartments, with the rear 10,000-litre section emptied first, at least 9t load is kept on the Xerion as long as possible for maximum traction and minimum wheel-slip.” Both suspended rear axles can also be configured to have independent steering and on this model the rear axle is steerable.

“The whole unit is able to get on the land in adverse conditions the only thing stopping us is if it did get stuck what we would use to get it out?” says Steven. “And we fitted Claas’s Pilot GPS system, as in some situations you can’t see where you’ve been.”

Mr Baker says he needs to spread between 30,000 and 50,000cu m a year to make the £300,000 investment in the Xerion and spreader viable. “There are seven sizeable dairies in the area, as well as a couple of pig farms. We’ve also a new anaerobic digester in the area that takes the food waste from Oxford, which adds another 10,000cu m.”

Mr Baker usually charges between £2.60 and £3/cu m depending on the distance travelled. “Compare this to the nutrient value of the slurry and the cost of storage, and it’s a worthwhile operation.”


Want to find out how much your tractor's worth?