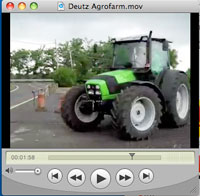 The benefits of CVT transmission are normally confined to higher horsepower, arable farm-destined tractors. But, with the launch of Fendt’s 200-series Varios last year and now Deutz’s TTV Agrofarm, smaller mixed and livestock farmers now have the choice of opting for sophisticated, infinitely variable transmissions too.

First previewed in the Same Dorado F110 some three years ago, this first SDF-built CVT transmission has taken five years to develop and has been under intensive scrutiny out in the field, before making its way into its Deutz-Fahr tractors, says the Italian company.

Built and developed in SDF’s Treviglio factory, the T5100 TTV box uses a hydrostatic unit coupled to two powershift clutch packs and a pair of hydraulic variator drives to fill the gaps. This means that, in the 0.1kph to 24kph field range, drive is nearly 100% mechanical from 5-18kph and in the transport range this is true from 10-38kph. Like most CVTs, when top speed has been reached, revs drop off to a frugal 1800rpm, potentially providing a 20% fuel saving when compared with the engine running flat-out at 2100rpm.

Powered by Deutz 2012 four-cylinder Tier IIIA engines, rated at at 99hp and 109hp, the Agrofarm 420 and 430 have three driving modes: Automatic, PTO and “Heavy Duty”. Most drivers will opt for Auto when carrying out day-to-day tasks, however, for pto jobs the middle setting will prove most economical, reckons Deutz. For extra torque and lugging power, the Heavy Duty setting is called for, allowing the operator to run at between 0.1kph to 24kph.

The “Power Zero” function is a particularly useful, meaning that when operators take a foot off the throttle the tractor remains stationary regardless of slope or terrain.

An easy-to-operate system allows drivers to vary shuttle sensitivity via a car-like thumb-wheel on the forwards/reverse lever.

The four-post cab is surprisingly spacious for a tractor of this size, and the passenger seat is a welcome change from the usual that smaller tractors offer.

Standard hydraulic flow is 93-litres/min through a tandem pump and lift capacity is 5300kg as standard, with the option of a 6200kg if necessary. Four spool-valves are controlled via a joystick or toggle levers and, for those wanting a front hitch, there’s the option of fitting a 1800kg-lift unit with pto.