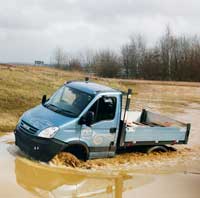 Pull up next to the Iveco Daily 4×4 and you’ll do a bit of a double-take. It certainly looks like a van from the front, but one that seems to have been dropped on to a wildly over-sized chassis.

The Daily 4×4 is designed to fit in between a Land Rover Defender and a Mercedes Unimog, says Iveco, but the concept is far from new.

In 1985 the Italian company produced a similar vehicle, although that was made entirely from Iveco hardware. This latest version consists of a standard Daily cab mounted on a heavy-duty chassis built by fellow Italian maker SCAM.

First seen in 2007, the new model uses a driveline and transfer box from larger, truck-type vehicles. Permanent all-wheel drive sees power distributed 68% to the rear axle and 32% to the front, while the transfer box gives a total of 24 ratios.

Climb up into the cab and you’ll be surprised how civilised it all is. The cab is distinctly van-like; in fact it’s taken straight from a run-of-the-mill 2wd Daily. Layout is simple and driving position is comfortable, with a straightforward six-speed ZF transmission, lo-box and splitter option for when things get challenging, all with controls that lie close to hand. Electronic diff switches on the dash are swift to engage, too.

There are two engine options, a 2.3-litre developing either 96hp or 136hp and the three-litre model we tested which puts out 176hp and 400Nm of torque.

Despite the swirly paint job (Iveco sponsors the New Zealand All Blacks) it’s a tough-looking machine and the torquey engine had more than enough power to cope with very sticky Bedfordshire clay. On the odd occasion it did grind to a halt, it was through lack of traction rather than lack of power, and that was despite being shod on Michelin 255/100R16 tyres.

Ride is surprisingly smooth both on and off-road, with 3.5t models using twin parabolic leaf springs on the front and three on the rear. Larger 5.5t versions adopts beefier three and four leaved packs respectively.

Because the cab is mounted high on the chassis frame, maximum suspension travel was available to the designers, yet you don’t get the seasickness-inducing roll you would expect on a vehicle nearly 3m in height. Although it’s limited to 68mph on the road, there is a 75mph option available.

The Daily 4×4 is available in three-seat and six-seat crewcab configurations, with wheelbase lengths of 3.05m or 3.4m. Weighing little more than a Land Rover Discovery at 3.5t, the Daily’s towing capacity for the model we drove was 3.5t.

Payload depends on whether you choose a 3.05m model, which can carry 1010kg, or a 3.4m version which can handle 980kg. Various factory-fit pto options are available, too.

Who would use it? Fencing contractors who wanted something cheaper than a Unimog, maybe. Or farmers who wants something with more off-road ability than a standard pick-up. Either way, you’ll never lose it in the Cereals Event car park…