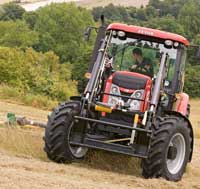 But as farmers’ expectations have risen, the Czech manufacturer has struggled to keep pace in one key area – transmissions.

Since electro-hydraulic power-shuttles have become the norm for most tractors, Zetor salesmen across the UK have had to make excuses about the company’s lack of a clutchless reverser.


Given that the eastern European tractor maker built its name in the livestock sector, it’s proved a pretty sore point for dealers where a shuttle is often critical to the sale of a loader tractor.

But back in February that all changed. Launched at the SIMA show in Paris, the Proxima Power range gained a power reverser and three-stage gear-splitter.

We got hold of one of the first demonstration machines in the country to test out the new transmission’s capabilities – Here’s the video:

I have to lay my cards out here. I like Zetors. I like the simple, uncomplicated, no-nonsense, no-frills approach the Czech firm takes. It knows its market and it sticks to it.

But for a long while the company has lacked one vital component that farmers expect of a modern tractor – a power-shuttle. And that’s why I was so keen to get in the driver’s seat. At last it seemed Zetor would be able to compete with the main players.

I approached this test-drive with some caution. Why? Well, sticking with its current philosophy of keeping as much R&D in-house as possible, Zetor’s management decided to develop the new transmission independently at its HQ in the south of the Czech Republic.

Not even the big boys do that – most still go to dedicated gearbox specialists like ZF, Dana and GIMA for the dark arts and clever trickery of modern transmissions.


So it’s a slightly unusual way of doing it and I was keen to see what the company had come up with.

Apart from the stickers on the bonnet, nothing visibly sets the “Power” model apart from other models in the Proxima range. Bold black and red curves and a flashy chromed headlight surround make it a much better-looking machine than Zetors of old.

Jump up in the cab and the long, wafty wand of the previous mechanical shuttle is gone, replaced by a neat, red plastic paddle close-coupled to the steering column.

Just below this lives the winker stalk. Intentionally or not, its low positioning provides a useful – and annoying – safety feature. Every time the driver enters the cab, knees clash with the horn button so that everyone in the immediate neighbourhood knows you’re about to set off.

Access isn’t brilliant to what feels like a cavernous cabin. This is in the main downside to the comfortable but cumbersome co-driver’s seat. Rather than neatly folding in two, it is hinged so that the whole thing swings right back over the left-hand mudguard. Zetor UK tells us that a new moulded seat is on the way from the factory.


With plenty of glass all round, visibility is pretty good in all but one direction. Views skywards are severely limited by a low front screen and even lower roof-mounted blower-box – not a great attribute given that over two-thirds are sold with loaders.

Unfeasibly large and ineffectual without optional air-con (£1242), surely the fan unit could be slimmed down or relocated to allow for a skylight or a similar arrangement to Kubota‘s arched front screen?

Other than this, the largely mechanical controls are where you’d expect of them, although the two pto-speed selection levers down to the left of the seat lack any labelling, leaving the operator to guess or refer back to the manual.

First job of the day was to hitch up to a 4.6m Spearhead rotary topper. Gear selection via the long lever feels positive, although there is quite a reach down to the range lever which is so stubby you might wonder if it was actually designed to be kicked back and forth with your right heel.

The shuttle takes up drive relatively smoothly so long as the there’s a healthy dose of right boot. But when it came to inching up to an implement with the test tractor things were a little more tricky. A high bite-point meant all the action happened at the top of the clutch pedal’s travel.

We’re told this is solved with some simple adjustment and even re-calibrating shuttle aggressiveness does not require a laptop. Instead a simple (and cheap) fag-packet sized box of tricks plugs in to alter gearbox settings.


Unlike 4wd and the diff-lock (which are pneumatically controlled thanks to the tractor’s on-board compressor), the pto is electro-hydraulically engaged via a switch on the right-hand cab B-pillar. A second rocker-switch allows the driver to select how quickly the pto kicks in with 1sec, 3sec and 5sec delays allowing a degree of feathering for more torque-hungry kit.

Some steep banks with stalky ryegrass and a good dose of low-level regrowth provided an ideal test for the 99hp engine. Expecting to be working my way down through the gears to maintain 540rpm at the shaft (indicated by a squint-inducingly small digital dash readout), I was surprised to find that there was no need for a main gear change and the three powershift steps were enough to keep things spinning at the right rate.

Shuttle modulation might not be the smoothest but the clutchless splitter has to go down as one of best in the business. Even with the engine running at well over 2000rpm, there wasn’t the slightest of jolts.

Similarly impressive was the 4.2-litre engine’s tenacity. Working with a topper that would more usually be coupled to tractors of 130hp plus, it was rarely pulled down from the required revs.

With our pasture-topping job done, it was time to move on to a spot of loader-work and haulage. Shifting 1t bags of Nitram from store to trailer showed up the shuttle and clutch’s lack of modulation but we’re promised this is easily rectified. What seems a low flow-rate of 50-litres/min from the gear pump actually proved to be perfectly adequate for the test tractor’s 1.6t capacity loader which performs well.

With the trailer loaded up to well over 11t, a run over the Dorset Downs proved the real test for the punchy Zetor power-plant. Some steep inclines meant frequent gear changes were needed. For the lazy-legs among us the company has fitted a clutch dump button to the main gear-lever.

This allows drivers to change up and down through the four main ratios without touching the clutch pedal. In practice this works so well that your left leg begins to wonder what its role really is.