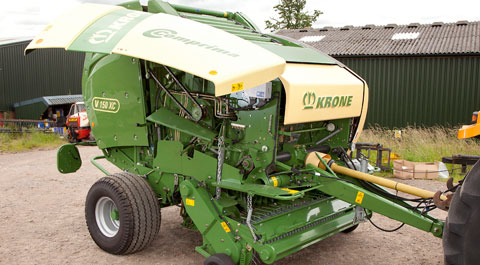 Power Farming’s ‘Getting the best from’ series of articles and videos continues with the round baler. With the help of Krone’s James Duggleby, we take an in depth look at the points on a round baler users should be checking.

The Krone Comprima V 150 XC is a variable chamber round baler which can produce bales with diameters from 0.9m to 1.5m. The XC designation denotes that this model is also equipped with 17-blade rotor cutter unit. Krone reports it to be its top selling round baler.

As with all pto powered implements checks should be made to ensure the pto shaft joints are in good working order, the two halves can slide easily within each other and the plastic guard is not damaged.

The pto has a slip clutch to protect the baler from over loading. While at the front of the baler, check the condition of hydraulic hoses and electric wires and replace as necessary.

Also make sure hydraulic pipes are connected in the correct way, following the instructions on the sticker on the front of the machine.

If there are any problems with the electronic control box, the solenoids can be overridden manually.

The draw bar towing ring is fitted with a bush which needs to be replaced when worn.

Also, the height of the baler above the ground is important if the pic-up is to work efficiently. Measured from the end of the bearing for the main feed rotor, the height should be between 700 and 800mm. Adjust on the drawbar angle settings.

Infront of the net wrap system sits the main gear box. This splits the incoming drive into left and right hand drives should be checked for oil level. Top up with 15W40 engine oil and avoid organic oil which may cause blockages.

To prevent net wrap becoming tangled, the flow of the net is progressively braked. The shiny edge of the braked wheel needs to be protected from rust during the winter and should be covered with a waterproof tape.

Bale pressure control is re-set every time the rear door is opened and a bale is ejected. Pressure can be set from a control in the cab or via a tap on the machine. Release pressure at the end of the season to take tension off belts.

The height of the baler above the ground is important if the pick-up is to work efficiently. Measured from the end of the bearing for the main feed rotor, the height should be between 700 and 800mm. Adjust on the drawbar angle settings.

Pick-up height adjustment is via the jockey wheel position and a spring-loaded chain which allows it to ‘float’ more readily. The tines are camless with just a single bearing at each end of the axle. Check for bent tines.

The knife unit can be lowered hydraulically to allow for replacement of the 17 blades. A selection system allow the number of blades – 0, 8,9 or 17 – to be brought into use and control chop length. Check that the system is locked before using.

Knife blades can be sharpened but not with a grinder which produces too much heat and makes the metal brittle. Sharpen only on the smooth side of the blade – not the scalloped side.

Autolube automatically applies oil to the chains on the baler. An adjustable cam changes the stroke of a pump and the amount of oil used, as a result. Check all chains are receiving oil.

Core density is controlled by adjusting a cam. This alters the stroke of the ram responsible for altering the size of the chamber when the bale is first started. There are three positions to create a soft, medium or high density core. Ensure the setting is the same for each side of the baler.

Via the inspection hole on the right hand side of the baler, check there is no build-up of material on the knives. If left, this can cut the net wrap when wrapping is completed. Failure to cut can result in a massive tangle.

With the rear door open check for build-up on the rollers which could prevent the bale being rolled at start up.

Check the scraper units of the idler rollers – any build-up will affect belt tension.

Any problems will sensors on the baler can be picked up using the diagnostics menu in the in-cab control box.