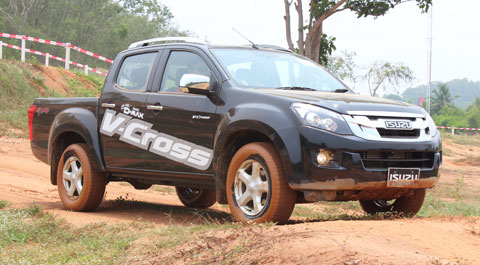 More comfort in the front and more space in the back will appeal to farmers with a lot of lugging to do. A more car-like ride is good news, too. The only downside at this stage seems to be the increased bulk of the vehicle in narrow country lanes.

This had to be one of the most unusual pickup truck test drives ever. Instead of the usual multiple layers of clothing, ice-cold hands and persistent drizzle you’d expect in the UK, we had to contend with temperatures hovering around the 35C (100F) mark and humidity so high you could wring the air out like a sponge.

Me and the man from Professional Builder magazine (farmers and builders are the biggest customers of Isuzus) were the only two UK journalists to get a chance to drive the new D-Max.

The venue was Thailand’s biggest 4×4 test track – not exactly mimicking UK conditions but still giving a good idea of what the new D-Max can do.

Our Thai hosts referred to it as the All-New Isuzu D-Max (with a long American-style drawl on the word All). Don’t remember the old D-Max? That’s because it was rebadged as the Rodeo in the UK.

Find out more about Isuzu’s plans (link to isuzu 2)

The old D-Max (aka Rodeo) was never an ugly truck, but it wasn’t particularly pretty either. The new one is a much more stylish beast, with a slickly aerodynamic grille, heavily raked windscreen and big, slightly startled headlights. There’s chrome, of course, but it’s sparingly used and surprisingly tasteful.

The new machine is a bit longer and wider than the old one, but it hides its bulk pretty well.

Confession time. The Thai market is at an earlier stage of emissions regs than the European one, so the trucks we drove had the three-litre engine rather than the 2.5 litre unit that the UK one will get.

The three-litre unit was pretty quiet and Isuzu has obviously worked hard at reducing the roar of the engine. We’re told that the 2.5 litre one is quiet too, but we’ll have to wait a few weeks before we can get our hands on one.

Interestingly, when it comes to power outputs, Isuzu has held back from getting into a mine-is-bigger-than-yours contest with the Ford Ranger. But though the 2.5 litre 163hp has no more hp than the old unit, torque is up from 360Nm to 400Nm.

That should help boost towing ability and keeping a lid on overall hp should restrain fuel consumption.

Buyers get a choice of six-speed manual and five-speed auto. Though most farmer buyers will no doubt opt for the manual, the auto ‘box in our test vehicle did a good job of staying in control despite some pretty extreme climbs and descents.

The interior of the old Rodeo was a perfectly pleasant place to be. But like all pick-ups, the interior styling was pretty functional and the materials had that vaguely1980s feel to them. You always knew you were in a working vehicle… The new one is much improved, with controls that could come from any current mid-range saloon and a big jump in the quality of materials. Higher-spec models get a big rotary dial with all the main heating and ventilation controls on it, while on lowlier models two separate dials do the same thing.

There’s also a multifunction display at the centre of the dash and a range of in-car entertainment options that would have been unthinkable on previous-generation pickups. We’re not at the VW Golf hewn-from-stainless-steel.

One of the most striking things is the availability of car-type luxuries like cruise control, electric seats and decent-quality phone and audio equipment. As with Ford’s recently-launched Ranger pickup, the aim is clear – just because you’re working it doesn’t mean you have to go without.

The fact that there are 11 bottle holders (not to mention cupholders that have a special insert to hold a small fruit-juice carton) says it all. This is luxury lugging.

Expanding the overall length and width of the truck has given the designers an easy way of boosting space in the back without grabbing precious inches from the load area. So there’s a lot more knee-room for rear-seat passengers. The doors are wider than on the old model, too, so you don’t have to do that limbo-dancer act to get in the rear doors.

There’s also a useful boost in load area, with the doublecab 138mm longer and 70mm wider than its predecessor.

Until about 10 years ago, pickup truck suspensions were about as flexible and sophisticated as a 1950s metal hospital bed. But, judging by the performance of the D-Max, Isuzu seems to be moving in the right direction.

A change in the front suspension from a rigid layout to coil springs and gas shock absorbers means bumps and thumps are kept much more in the background. Ride comfort is probably still not as good as on a high-end SUV but this feels like a vehicle you could do long journeys in without falling out at the other end in a state of head-throbbing, wobbly-legged shellshockedness.

Thai road regs meant we couldn’t drive it on the road, but a stint as a passenger suggests it should be a pretty quiet and smooth drive.

A nicely-made silvery knob next to the handbrake gives you a choice of 2wd, 4wd high and 4wd low. Going from 2wd to 4wd high can be done at speeds up to 60mph, but you still need to stop to make the move to 4wd low. We look forward to trying it in UK conditions.

The new D-Max line-up divides neatly into two categories. These consist of lower-spec work-type models for short-distance hauling and higher-spec models that are aimed at those bigger journeys.

All vehicles have air-con and electric windows

The first batch is due to arrive in June. The old models have apparently all but run out, in case you were thinking of grabbing a bargain…