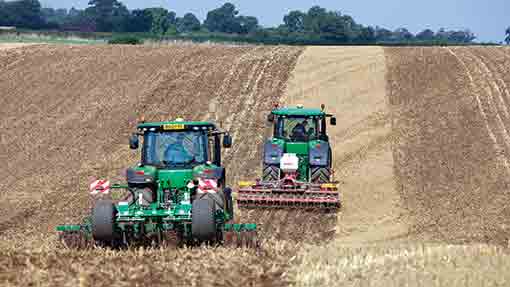 John Deere’s high-horsepower tractors have been hankering after a new powershift transmission for years and at last it’s here. Nick Fone and Oliver Mark find out if it is any good by pitting it against its stepless cousin.

Until now John Deere 7R punters have had just two gearboxes to choose from – an ageing four-step semi-powershift and a stepless CVT.

Both had their place, but without a full powershift box in the offing Deere was lagging a little behind some of its competition.

Hence the arrival of the e23 transmission – a proper, full-on 23-speed powershift that will be available on all models in the 7R range. It will also elbow out the old 16-step powershift – first fitted on Deere’s mid-1980s 50-series prairie monsters – on some 8R models.

While Deere’s old powershift box had 16 forward ratios and just five in reverse, the new e23 is a 23 forward and 11 reverse-gear unit. Well, that’s not quite true…

The transmission is actually a 24-speed box but the gear ratio of both cog number eight and nine is identical.

This is because at that point in the range, all three clutch packs would normally need to change.

So, to avoid achingly long delays or spine-snapping jolts, two clutches do the work, without the operator ever knowing.

To find out how it works in the field we put the new 7310-R range topperwith e23 box head-to-head with an outgoing 7280-R equipped with stepless AutoPowr CVT.

The first comes with a left-hand lever for shuttling between forward and reverse and an old-school powershift gate on the right for up and downshifts. The alternative has park-lock and shuttle all integrated into the standard gearbox gate.

Our e23 test tractor had the latter while the AutoPowr one had shuttleand transmission lock up by the steering wheel.

In our book there’s no contest.

It should be left-hand for direction changes and right for gear shifts.

With everything clumped on the one lever your right hand’s manically busy on the headlands while the left’s left with very little to do. Three different driving modes can be selected through the new John Deere touchscreen – full auto, custom or manual.

There aren’t many reasons why you shouldn’t stay in auto for most of the time, particularly on the road. It can be a little jumpy at low speeds, but clamber up the transmission ratios and there’s little to distinguish its smoothness from a CVT alternative.

For the most part it’s the same story in the field. However, hit a hard patch or a well-trodden tramline with a horsepower-hungry implement on the back – we had a 4m Sumo Trio – and the new transmission will fall to its knees.

Like any auto box, it can’t foresee hills, tramlines or tough spots with the result that it has the reaction time of an anaesthetised elephant.This meant sudden changes in soil type caused our test tractor to stall no matter who was driving.

Our solution was to have the transmission home page open at all times – that way we could switch to manual and select a low gear every time we saw a tough spot coming. Just a shame there isn’t a way of swapping modes with a knock of the stick as is the case with the DirectDrive box fitted to Deere’s 6-R tractors.

Running the box in full automode also engages the firm’s efficiency manager. This is designed to keep a lid on engine revs in a bid to reduce how much diesel it drinks. However, on predominantly light land the tractor wouldn’t budge above 13th gear despite the engine roaring away at 2,100rpm.

The engine in the CVT version chose to run at a more sedate pace across the field and also has settable cruise speeds for steady work rates. The new e23 box competes by offering two programmable target speeds. These are useful for jumping to a particular working speed once the cultivator tines hit terra firma.

There’s also a pedal lock that holds the tractor at the pace you’ve set with the pedal and releases with a touch of the brakes. We found this most useful for road work.

The big news is the large screen,which brings the 7R in line with high-horsepower rivals such as Fendt’s 800- and 900-series. We thought it was an ergonomically sound set-up, and liked the fact Deere has still found space for the old hotkeys that take you straight to the section you’re looking for.

Elsewhere the green giant has rung the changes, binning the programmable, letter-labeled buttons and bringing back dials for lift speed and draft control. Push-button four wheel drive and diff-lock control has also made a comeback – all positive steps in our book.

After throwing thousands at a marketing campaign insisting a “single fluid solution” was the only answer to emissions, Deere has swallowed its pride by adding an AdBlue system to deal with exhaust muck.

Interestingly, Deere reckons itsmethod of emissions control uses AdBlue at a rate of just 3% – about half that of its rivals. We found the figure was closer to 5% during a day of steady cultivating.

The new e23 gearbox is a big stepup from powershift boxes of old.With loads more ratios and decent auto functions, it’s definitely better equipped to deal with a wider range of work.

It’s very smooth shifting but slower to react than the AutoPowr box when coming under load in the field at which point operators are bound to reach for the lever and do the shifting themselves.

It’ll depend on the work you’re planning to do but we reckon the new box will do pretty much everything a CVT can and you’ll save nearly £4,000 on the list price. 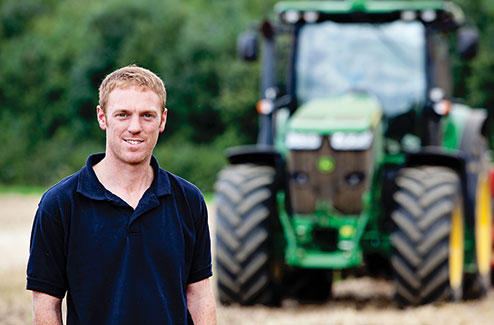 Ian Fisher has been at the wheel of a CVT-equipped 7280-R for the past two years and knows its various ins and out well. So to give a true insight into how the new powershift gearbox compares with the AutoPowr transmission in his current steed, we asked him to run the two side-by-side on cultivations and corn-carting duties for a week, clocking up 76.5 hours on the 7310-R with new e23gearbox.

“The first, most obvious thing you notice is the new screen. I thought the old one was good but this version is just fantastic – you can easily find everything you need.

“The icing on the cake would be a proper multifunction joystick. The new hydraulic cross-lever is better but it’s still not as good as what you’d find in a Fastrac orFendt with linkage, shuttle and a couple of spools all within reach of your thumb.” He experienced the same issues in the field with the gearbox’s auto mode as we did and found himself resorting to manual every time things started to get a bit tricky.

“Auto is great when you’re pressing because the load doesn’t vary too much. You just set the box at target speed and the computer works out how to get there burning minimal fuel.

“But get on to some heavy draft work – like with our 3.5m SumoTrio – and things come unraveled. As you get into tougher ground it just hangs on until revs get pulled down to1,200-1,400rpm and it will quite often stall the tractor.

“If you do it in manual you’ve got a lot more control but even then, if you’re not quick enough on the lever it will kick out of gear if it feels it’s being overloaded.

“With the AutoPowr we don’t get any of that. It just quietly works things out for itself and puts as much power down as it thinks it needs.”

“However, on the road the e23box is a dream in auto – it’s almost as smooth as the CVT and certainly feels like it pulls that much better, although you’d expect that given the test tractor had an extra 30hp under the hood.”