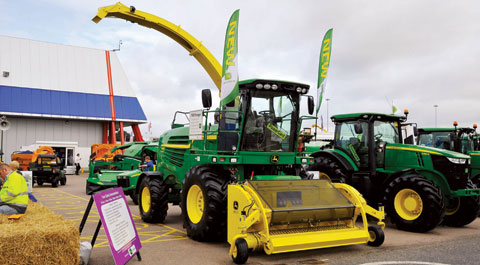 John Deere showed off its new 7080-series foragers at Livestock 2012, which come with a clever new corn cracker, revised engines and an updated harvest lab system.

The KernelStar processor uses a bevel disc designs and is claimed to do a better job of smashing maize and wholecrop, and produces a better quality feed for cattle and anaerobic digesters as a result. Deere bought the patent from German manufacturer Lacotec, which makes foragers for reverse-drive tractors.

Topping out the range if the 812hp, 19-litre Cummins powered 7980 which remains in the Tier ll emissions bracket. There is also a new five-speed length of cut transmission which can be operated from the cab.

An optional Harvestlab upgrade means the system can now analyse starch, protein and other constituents, as well as the standard crop moisture and volume readings.