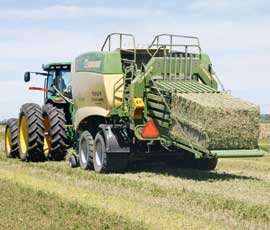 Krone will unveil a new BigPack baler – the 1290 HDP11 at Agritechnica in Hannover in November.

See a video below of the big machine put through its paces in America.

The straw business is a tricky game – year by year you don’t really know what you’ll end up with and then there’s the nightmare of getting the bales shifted.

To do it efficiently, it’s all about getting lorries up to their maximum weight but, by its very nature, straw isn’t the densest of materials. Over recent years we’ve seen each of the big players in the square baler business launch machines capable of packing more weight into standard-size packages.

One of the first was Krone which, seven years ago, unveiled a high density press (HDP) variant of its Big Pack 1290 baler. The new machine quickly proved itself, cramming up to 25% more straw into a standard 120x90cm (4x3ft) bale.

Five years later, the German firm realised it needed to up its game in the output stakes and launched a HighSpeed version that could cover the ground 20% faster than before.

Clearly that wasn’t enough, so at Agritechnica in Hannover next month the company will introduce a new BigPack that has the potential to rock the baling world.

Tagged the HDPII, the name may not have changed much but the baler certainly has.

“We tried to adapt the existing design of the BigPack to get more out of it, but it quickly became apparent that it had reached its maximum potential,” explains Krone baler specialist Niklas Beindorf.

“Of course, the basic principles remain the same, but everything has had to get bigger or increase in numbers. At the beginning of the project we had ideas about how we could generate more output and greater density, but it’s not until you build something and get it in the field that you realise certain things aren’t possible.

“The prototype started out as a standard six-stringer, but we just couldn’t stop it busting bales. That’s when we realised we’d reached the absolute maximum for density – we needed to move to eight knotters.”

But that wasn’t simple either. Fitting in an extra set of knotters on an already cramped rail wasn’t an option, so the engineers had to go back to the drawing board and develop a new slimline string-tying device.

But knotters only formed part of the quest for more output. At the very front of the machine, the 578kg flywheel now spins at 1,180rpm, increasing compression forces by 30% and upping ram strokes from 38/min to 45/min.

All this heavy metal takes a fair bit of muscle to get moving, so Krone fits a hydraulic flywheel starter motor as standard, allowing the driver to ease the pto in once there is a little momentum built-up.

Down at the pick-up, a powered crop-press roller matches forward speed and ensures material keeps flowing into the pre-chamber at an even rate. If you opt for a chopper version, you a get a 30% bigger rotor, claimed to be able to handle a fifth more throughput.

The VFS pre-chamber is beefed up and nearly 20% bigger than before. Running at speeds of up to 15kph, you’re bound to get the occasional stuff-ups, so a drop floor is used to allow blockages to pass through without delaying the job in-hand.

While the bale chamber is much the same as previous models, the rams used to provide the pressure are significantly bigger.

Up on top, the eight tightly-packed slimline knotters gain an all-new cleaning system. As well as the conventional intermittent air-blast from the on-board compressor, Krone has developed a belt-driven blower box (much like a combine’s fan unit) that uses two turbines to run a constant flow of air up underneath the knotters.

Twine storage extends to a total of 54 balls in lockers on either side of the baler that raise and lower hydraulically. As you might expect, tandem steering axles are a standard feature, while Krone’s own Isobus controller sits alongside more basic control boxes on the options list.

Triple M Custom Farming has run Krone big square balers for the past 10 years, having switched from what was seen as the industry standard at the time – Hesstons.

With each of the Mussi’s five BigPack balers clocking up an average of 20,000 bales a year in a wide range of crops, the family were seen as ideal candidates to test out Krone’s prototype high-capacity eight-stringer.

So early last year an unusual looking machine turned up at Triple M HQ, complete with its own dedicated engineer to ride shotgun with Nick right through the season.

“When the HDPII showed up we were just getting stuck into the wheat straw so we put it straight to work.

“It had an immediate impact. As soon as we got it in the field we realised it was going to walk all over our other machines. Generally with our old HDP we’ll run at 4-5mph but with the new baler we average 9-10mph and sometimes we’re up around 14-15mph. It is genuinely double the speed.”

While the older machine will comfortably pump out 500kg bales, Nick’s experience has shown it is possible to get up around the 615kg mark with the HDPII.

“We’ve had to limit weights to around 1,200lbs (540kg) because our self-propelled stackers can’t lift the bales otherwise. They were designed for small bales, but this winter we’ll modify them so we can get the bales up to full density.

“Sticking with those weights we’re turning out 2 bales/min with the new machine, while the old version plods along at 1.3 bales/min.”

“It had some small niggles to begin with, but amazingly after doing 13,000 bales we had no major issues.

“The new slimline knotters needed some tweaking. Because they are so closely packed together, debris coming up from the chamber was lodging between them and causing problems.

“That was solved over the winter when the guys at Krone came up with the idea of the full-width blower box. Since that’s been fitted we’ve had no issues.”

Why is weight important?

“We need to produce the densest possible bales to get our trucks as close to full weight as possible – that way we’re not burning extra fuel unnecessarily.”

In California trucks are restricted to a gross weight of 36.3t. Krone HDP bales push loads to 22t, which put the heavy American wagons close to full capacity.

Much of Triple M’s alfalfa crop is destined for foreign shores. Dairy units and horse studs in the Middle East have a huge appetite for imported forage crops and demand is growing rapidly for high-quality, protein-rich forage in China, Japan and Vietnam.